Lots of bugs this weekend. Saturday night, I gave a program about "singing insects" - the Orthoptera - at Dawes Arboretum. We limited it to 25 people, and had a full house. After the presentation, we headed out into the dark and I've never had such luck finding cool bugs. Right off the bat, we tracked down and captured a Slightly Musical Conehead, the first of many. A Greater Anglewing was singing from the roof of the building that I gave the talk in. Restless Bush Crickets put in multiple appearances. And on it went - the best nocturnal singing insect foray that I've yet done.
Today, Jess Henning and I made a whirlwind trip into the backwoods of Athens County to check out a few spots, and encountered lots of noteworthy plants, and insects. I of course had the camera in tow, and managed some decent images. Following are a few of those...
A Snowberry Clearwing, Hemaris diffinis, works the flowers of a Rough Blazing-star, Liatris aspera. The dry meadow where this moth was found was full of blazing-star, and various pollinating insects. Shooting the hummingbird moths is a challenge, as they are in more or less constant motion, and their wings are a blur. When I encounter one and begin the hunt, I flip my camera's settings to shutter priority, and jack the shutter speed WAY up in order to better freeze movement. This image was made at a shutter speed of 1/2,500, with no flash. 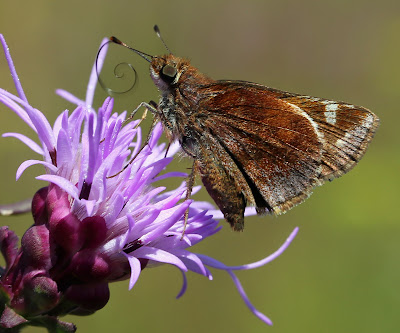 A female Zabulon Skipper, Poanes zabulon, was also working the blazing-star. I must confess to largely ignoring the small skippers, and appreciate George Sydlowski for correcting me on its identification. 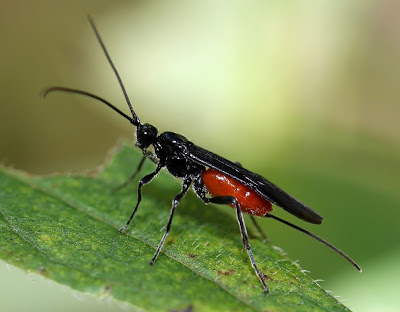 My favorite shot of the day. This is a TINY braconid wasp, and I think it is a species in the genus Atanycolus. It's a female, as evidenced by the long spikelike ovipositor protruding from the rear of her abdomen, and the entire animal was probably only 5-8 millimeters in length.

Braconid wasps are parasitoids of various insects, and species in the genus Atanycolus go after the grubs of wood-boring beetles. She'll somehow divine the location of a larva deep in a log, and auger that long ovipositor down to it, and lay an egg or eggs on the victim. The newly emergent wasp larvae will bore into their host, and eat it.