A stunning Red-shouldered Hawk, Buteo lineatus, peers curiously down at your narrator. I probably would have reacted the same, had some strange guy rolled up under my telephone pole and stuck a long cylindrical object out the sunroof. The mild-mannered raptor never even flew. It was one of nine Red-shouldered Hawks that Peter King and I found in our piece of turf for the Hocking Hills Christmas Bird Count, last Saturday. 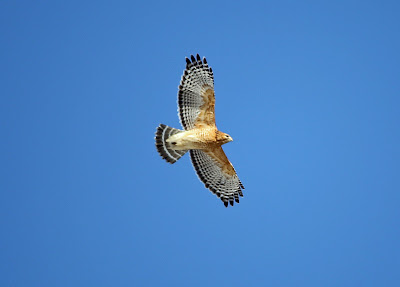 Everyone has their faves, and when it comes to Buteo hawks, the Red-shouldered Hawk is hands-down my #1 pick. The bird in this photo was yet another that Peter and I found on the Hocking Hills CBC. It's easy to see how the "red-shouldered" label came to be.

This particular bird came coasting over the territory of a pair of Red-tailed Hawks, which quickly rose to push the interloper away. Red-taileds are easily the most numerous Buteo in Ohio, but in some regions Red-shouldereds are gaining ground fast, or have even eclipsed their rusty-tailed brethren. We had nine Red-shouldereds, and eight Red-taileds, on this bird count and the former outnumbering the latter has become the norm in our piece of the count. 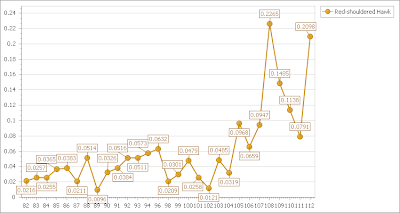 This graph displays the upward surge in Red-shouldered Hawk numbers on the long-running Cincinnati Christmas Bird Count over the past three decades. There are peaks and valleys, but the general trend of increases is indisputable. Many other CBC's in Ohio would probably show a similar trend, at least in southern, eastern, and parts of central Ohio. 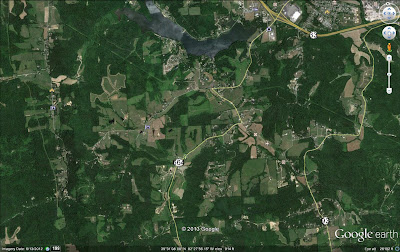 This wonderful Google earth map (thank you Google earth!) shows the section of Hocking County that Peter and I covered for the aforementioned bird count. Perfect Red-shouldered Hawk country. Red-shouldered Hawks are by and large forest dwellers, peaking in areas with a blend of older-growth woodlands, stream valleys, and occasional pastures. Their nighttime counterpart is the Barred Owl - if one of these species is present, the other likely is as well.

Hard as it is to believe these days, at one time forest cover in Ohio had been reduced to about 10%. All of those heavily forested Smokeyesque places, such as the Hocking Hills, Shawnee State Forest, Mohican State Forest, etc once resembled lunar landscapes. Forest-dependent animals such as the Red-shouldered Hawk did not fare well in those dark days of deforestation. As our forests recover and mature, the hawks are recolonizing the Ohio country in ever-increasing numbers. This is even true in heavily wooded urban and suburban 'scapes. Red-shouldered Hawks are not an uncommon sight in many wooded Columbus neighborhoods, for instance. They weren't there not all that long ago. 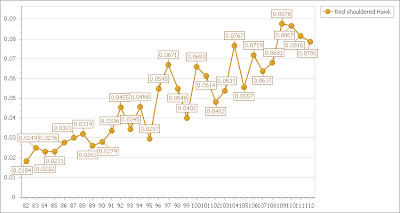 This is another piece of Christmas Bird Count data, showing the 30-year trend for Red-shouldered Hawks statewide. A good piece of news, to be sure, especially in light of numerous species that are going the other direction.

We've got a red-shouldered hawk in our neighborhood that bases out of a small nature preserve nearby. We've had fun watching it for a couple years now.

I find them to be fairly common in the Little Miami watershed from Clifton gorge down, but still fairly scarce in the upper Great Miami including the Mad watershed. Barred owls do seem to follow the same pattern. in the Clark County CBC history beginning 1978, Red-shouldered occurred as follows: 1985-1, 1989-1, 2012-1
At least we got one this year!
Barred owls 1986-1, 1988-2

Here in Southwestern CT, the Red-shouldereds have eclipsed the Red-tails in number for the last two years (though this assertion is just my observation, and not the result of any formal study).

They are my favorite raptor. A couple of miles from the edge of the urban park, in several palm trees, we had an abundance of Red Shouldered hawks for many years. I always listened for the keening of the fledglings in summer. With the loss of a couple of King palm trees, and a Murder of Crows moving in, I think our residents moved on to the park trees.

I don't know how to post the URL for a PDF page but I have a distribution map for them:

I live in Gahanna near the Big Walnut and we had a nesting pair in our neighborhood last year. They raised three young. The parents were seen frequently carrying food back to the nest. A snake was spotted in the talons one time and one adult tried to snatch something from our garden pond. The neighborhood enjoyed the five of them all summer.