Those hard-working Beaver (with video) 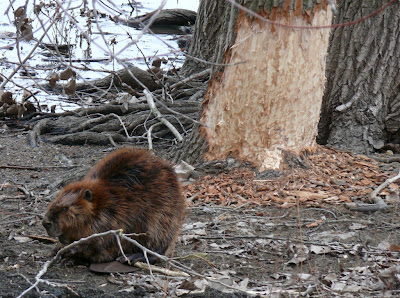 A Beaver, Castor canadensis, at his work station. I photographed this individual a few years back in Delaware County, Ohio, as the animal busily girdled huge Eastern Cottonwood trees along the shoreline of a lake. If a tree is too large to gnaw through and drop, Beaver will often girdle it, which eventually kills the tree.
Beaver are the consummate mammalian engineers, and their labors modify their environment to a degree that is probably unmatched by any other among our mammals (excepting Homo sapiens). These animals are clever, and hard-working to a fault. I've had the good fortune to see them on many occasion, and see the fruits of their labors many times. But few of us will experience the views of a Beaver at work that is shown in the trail cam video later in this post. David and Laura Hughes have been at it once again, and outdone themselves with this clip.
We should be grateful that Beaver are still around and making wetlands. The pelts of these animals have long been highly valued, and the pursuit of Beaver furs led to their extirpation in Ohio by 1830 or so. Eventually laws were enacted to govern their protection, and populations began to increase. Beaver began to trickle back into the state in the early 1900's, and by 1947 Ohio's population was estimated to contain 25 colonies in 11 counties. By 1972 their ranks had swelled to over 4,400 in 37 counties, and just four years later (1976) an estimated 7,500+ Beaver ranged over 40 counties. Today, there are probably in excess of 27,000 animals in the state, in all 88 counties. Trapping of Beaver is highly regulated, and current prices for a large grade A pelt is about $25.00.


A Beaver slices through the still waters of a pond that he and his predecessors created in northern Michigan's Presque Isle County. Few mammals are as at home in the drink as are these flat-tailed swimmers. A Beaver's entire life is spent in or adjacent to water, and all of their efforts go towards manipulating the hydrology of streams to better suit their purposes.

The animal in the above photo was a big 'un. A robust specimen can tip the scales at 70 lbs., although 40 lbs. would be a more typical poundage. You'll often hear a Beaver before seeing it. When danger is spotted, the animal will often slap the water's surface with its paddlelike tail, which creates an astonishingly loud SMACK! That sound alerts his fellows to potential peril, and then the tail-smacker will submerge. Extraordinarily oversized lungs allow it to remain below for up to 15 minutes. 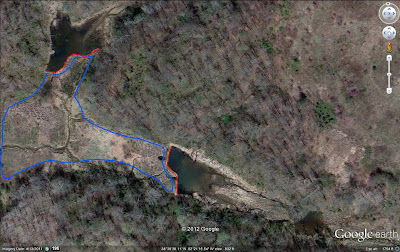 This Google Earth photo shows an incredible Beaver-engineered and maintained wetland complex in southern Ohio's Lawrence County. Two huge dams (traced in red) back up two ponds in the small valleys of a forest. The area outlined in blue - which disappears off the left side of the image - is a fantastic wetland spawned in the soggy overflow from the Beaver's primary ponds. A well-developed dam can be in excess of 50 feet in length, and often has a sinuous shape as these two dams do. The Beaver are dligent about maintaining these structures and keeping water levels at precisely the levels that their needs dictate.

I stumbled into the wetland complex above in 1999, and was awestruck by its compexity. The wetlands in the wake of the dams' outflow contained a remarkable diversity of flora; far more plant species than would have been present had the Beaver not taken up residence. The botanical diversity in turn sparks an enormous spike in animal diversity. We found American Bittern and Prothonotary Warbler in this wetland, both of which are rare in that part of Ohio. Dragonflies and other aquatic insects abounded, as did scores of other wetland-dependent animal life. When I first saw this Beaver wetland about a dozen years ago, it was obvious that the dams had been in place for some time. And as the Google Earth image is a recent one, they're obviously still there, and hopefully will be for some time to come. I want to make a return visit next summer, and marvel at this engineering feat firsthand once again.


If you regularly follow this blog, you may have seen the exceptional videography of Bobcat and River Otter made by David and Laura Hughes, which they kindly allowed me to share. Well, they've outdone themselves with this video, also made in Monroe County, Ohio, which shows a Beaver hard at work as it labors to drop a tree. Turn up the volume and you'll hear the sound of gnawing as the oversize rodent busily endeavors to bring down the tree. Note too the size of the wood chips that spew from the animal's maw as its huge incisors make mincemeat of the wood.

Thanks again to David and Laura for once again sharing their work with us.

Beavers are great, but they can sure wreak havoc on trails.