The perimeter dike at Pipe Creek Wildlife Area separates the site's marshy impoundments from the open waters of Sandusky Bay. Click the photo to enlarge, and you'll see some of the giant rides at Cedar Point in the distance.

I found myself near Sandusky, Ohio yesterday morning, and took the opportunity to stop in at the always interesting but not heavily birded Pipe Creek Wildlife Area on the eastern edge of the city. Pipe Creek juts into what is essentially the easternmost edge of Sandusky Bay, and the much better known landmark of Cedar Point Amusement Park is just a stone's throw northwest of the wildlife area. Inveterate twitchers will recall Pipe Creek as the scene of Ohio's second Black-bellied Whistling-Duck record (read about that HERE), found by Larry Richardson almost exactly two years ago. 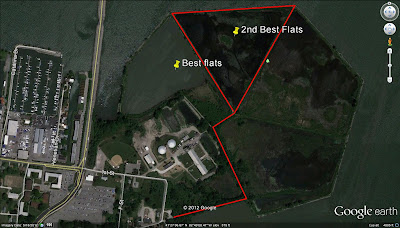 I was delighted to discover some superb shorebird habitat at Pipe Creek, and have marked the best impoundments on this Google Earth map. The red line is a suggested walking path for those interested in the most expedient route to the good stuff. I ended up walking the entire perimeter, heading counterclockwise, but didn't see a lot for my efforts until reaching the wetland units marked with the stickpins. The two impoundments on the easternmost side are largely grown up with marsh vegetation, but are still worth a look if you have time.

Pipe Creek does require some hoofing. You'll be in more a mile or more of walking, and you'll definitely want a scope along. But as long as the habitat remains as it currently is, the hike will be well worthwhile.

The 97-acre Pipe Creek Wildlife Area is entirely manmade; the pie-shaped wetland complex was constructed about 20 years ago as mitigation for wetlands that were destroyed elsewhere. Think what you may about wetland mitigation, but if well devised and placed properly, artificial wetlands can be very productive. Pipe Creek is an excellent example of a wetland mitigation site that has become a valuable stopover site for long distance migrant birds, and a raft of other flora and fauna.

This is the wetland marked as "2nd Best Flats" on the previous map. A lot of aquatic vegetation, such as that big bed of American lotus, Nelumbo lutea, are encroaching on the open shallows. Nonetheless, lots of shorebirds were foraging here and if you visit, you'll definitely want to scope out this unit.

Acres of mud and shallow water - manna from heaven for birders. I was thrilled to see the condition of the northwesternmost impoundment and as might be expected, it was full of birds. Shorebirds were evident everywhere, and the loudmouthed killdeer and yellowlegs vociferously announced my presence as soon as I wandered into view. Birds are coming and going constantly, and as Pipe Creek lies along the shore of Lake Erie, there will be lots of turnover among birds migrating through the region. Who knows what might pop up here in the coming weeks; maybe Ohio's second record of Red-necked Stint or something equally exciting.

While rarities are always great, these big mudflats are more important as migratory stopover and refueling sites for the regular cast of characters that have moved in large numbers through the Great Lakes since the last glacier. While I found no great rarities on this visit, I tallied plenty of common shorebirds, as follows:

The most conspicuous birds were herons. This wetland takes on a Floridian look, with all of the big white waders standing about.

Great Egrets were the most frequent of the herons; perhaps 50-60 were present. Second in terms of abundance was the Great Blue Heron; I saw maybe 30-35. Adding to the heron total was a Green Heron, and a Black-crowned Night-Heron that flushed from a tree.

This has been a boom year for Little Blue Herons in the north, and I was not surprised to find three of them at Pipe Creek, All were immature birds, such as the one above. Little Blues are white for their first year of life, and it can be easy to miss them if they hanging out in a crowd of white egrets. They especially resemble Snowy Egrets, but lack the prominent yellow feet and brighter yellow lores of that species, among other differences.

Little Blues tend to be somewhat sluggish and methodical in their hunting. A bird on the hunt in shallow water will frequently stir its foot in the substrate, spooking prey from the bottom. Animals flushed in this manner are quickly spotted and snapped up by the heron.

Twelve Snowy Egrets were present - a good number for one locale in Ohio. Even though this species is slightly larger than the Little Blue Heron, they usually appear a bit more diminutive to me. That impression may be due to the egret's habitat of keeping its neck hunched in an S-shape, and its slighter bill. Note the prominent yellow lores (skin at base of bill and around eye). The bird on the right has its foot raised, showing its striking golden "slipper". The Snowy Egrets are dwarfed by the Great Egret in the background.

Snowy Egrets tend to be hyperactive hunters, often dashing madly about and whipping their feet around in the mire. This video gives a taste of their frenetic ways, and offers a brief panorama of the Pipe Creek heron fest.