An interesting moth, new to science!

A tiny Adams County, Ohio prairie. This part of southernmost Ohio is notable for its "bluegrass province" prairies, which become more common in Kentucky, and barely nip north across the Ohio River. While many of these prairies are small, they are full of rare species. The prairie in the photo above has a very special treat, as we shall see.

I made the journey to Adams County last Saturday, and connected with John Howard and Tricia West, both of who live locally and are outstanding naturalists. Mary Ann Barnett ventured up from Kentucky, and Skip Trask joined us for the morning. Our mission? An incredible caterpillar. Lest you think me too foolish for chasing a caterpillar, rest assured that a field trip like this produces LOTS OF STUFF, from Blue Grosbeaks and Dickcissels to rare orchids to box turtles. But the caterpillar that follows was our primary quarry, and it is an intriguing tale.

This rather attractive member of the pea family is central to the story. It is scurf pea, Orbexilum onobrychis, sometimes known as sainfoin, french grass, or lanceleaf scurfpea (this is why botanists often communicate by scientific name; the variation in colloquial names can be maddening, and ambiguous). 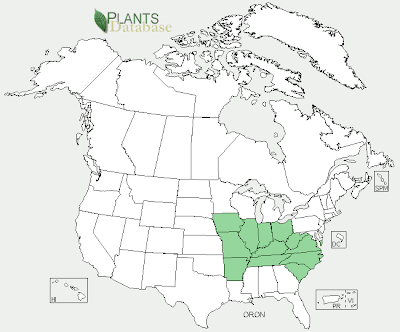 Scurf pea (for that is what we shall call it) has a very limited distribution. While this USDA Plants Database map shows it in 12 states, it certainly isn't common or widespread in most of them. Indiana, Illinois, and Ohio are the states of core distribution; beyond this region the plant becomes downright rare. Scurf pea is only known from one or a few counties in several of the peripheral states. 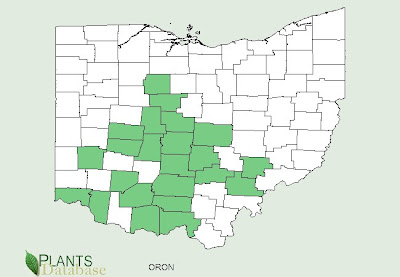 This is the Ohio distribution of scurf pea, and it correlates fairly well with former prairie regions. Even those easternmost counties such as Athens have tiny relict prairie communities. This allegiance to prairies seems to hold true when one reviews scurf pea's range in other states, too.

I would describe the plant as rare to uncommon at best, and widely scattered. I think all of the populations that I have seen have been in prairies.

Well, it didn't take any time at all after entering the postage stamp-sized Adams County prairie and its rather luxuriant stands of scurf pea before we found our target. This is the "mystery" Schinia moth caterpillar, and insofar as is known it feeds exclusively on scurf pea. John Howard stumbled into a few of these caterpillars last year, and his efforts to make an identification ran into a brick wall. With good reason; it turns out this species has not been formally described so it isn't in any books. Moths in the genus Schinia are known as "flower moths", and the adult moths of this species apparently fly in spring and early summer, prior to our visit.

It turns out that a few other populations of the moth have turned up in Kentucky, Indiana, and Illinois, all in the last few years and all on populations of scurf pea. Now is the time to search for it, as the caterpillars are very distinctive and far more conspicuous than the moths that they will eventually morph into.

We probably saw nearly 100 of the Schinia caterpillars in the mini-prairie, in an area no bigger than a small urban yard. It blows me away that this species could have been overlooked for so long. The caterpillars are reasonably good-sized - an inch or a bit longer - and quite boldly marked. Their creamy-yellow ground color is quite showy, and the ornamentation of black dots makes them really stand out.

These Schinia caterpillars are also active by day, which further aids in their detection. We assume that they must be chemically protected, as the predators such as birds seem to leave them alone. If they were tasty, one hungry Common Yellowthroat or other songbird could quickly lay waste to the entire caterpillar population, but this isn't happening. The caterpillar's apparent toxicity raises questions about the scurf pea, their only known host plant. There seems to be very little study of it, but I would guess that scurf pea must produce some sort of foul chemical compounds that these caterpillars have evolved the ability to assimilate.

For the most part, if not entirely, the caterpillars feed on the fruits of the scurf pea, and perhaps a bit on the flowers as well. I caught this one happily digging into a fruit, quite unbothered by my close proximity. Chemical compounds sometimes are sequestered in high concentration in plant seeds, and this may be why the Schinia cats harvest the fruit, and their emergence is timed to the plants' production of fruit.

Here's a closeup of a raceme of ravaged scurf pea fruit. The caterpillar bores a nearly circular hole through the fruit's protective wall, and efficiently vacuums out the contents.

After seeing the new caterpillar firsthand, I thought of a prairie remnant not far west of Columbus and some 115 miles to the north of where we saw the cats in Adams County. So, I skedaddled over to this prairie, seen above and only 25 minutes from my house, yesterday afternoon. There are nice stands of scurf pea here; far more of the plant than at the sites that I saw in Adams County. It seemed possible that the new caterpillar could also be here, but there's only one way to find out and that's to go have a look.

Bingo! Within five minutes of beginning my inspection of the first patch of scurf pea I came across, I had spotted one of the caterpillars. That was a very cool experience. Note how this one is harvesting the scurf pea fruit and remaining utterly oblivious to your blogger, just as they acted in Adams County.

It wasn't long before I spotted a second caterpillar, and this one was firmly attached to the underside of a leaf. It's head was curled under in the J-shape that some caterpillars adopt just prior to entering the pupal stage and I wonder if that's what s going on here. I'm not sure anyone has yet seen a cocoon of this species, or understands that part of the life cycle. It may be that the fully mature caterpillar drops into the leaf litter and overwinters as a pupa on the ground.

I'm sure that I would have found many more of the caterpillars, but a prairie thunderstorm blew in with a vengeance, and chased me back to the car. I'll hope to get back to this site for a more thorough inspection very soon. 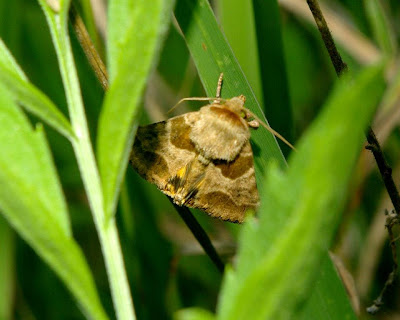 John Howard managed to find one of the adult moths back in June, and made this photo. It is a rather sharp looking insect, just as is its caterpillar stage.

I look forward to learning more about this interesting moth, and its eventual formal scientific description and naming. This Schinia flower moth is yet more proof that we don't know everything and that fascinating new discoveries lurk under our noses. To me, it further reinforces the value of protecting significant natural areas such as the prairies where this moth has been found. Who knows what else is out there that we don't know about?

I'm tickled pink that you found them on another site as well! That made my whole day! :)

Awesome find by John Howard! Love the Schinia complex. Do you know if and who is going to write the formal paper that describes the new species and what name (scientific) will be given it? How about Schinia howardii?

No Vince, I don't know who will publish the description or when, but I'll be with David Wagner next week and may get some insight into this.

All Hail the Silverback Science Chimp!! Sharing on Facebook...this is just too good. WAY TO GO finding it in another site. This is how science is fueled: by curiosity. Yahooo!! Busting my buttons for my friends Jimmy Mac and Tricia West!!

Bill of the Birds said...

Ossum post Jim! and an even better find! Congrats!

This is extremely cool! The North Country/Buckeye Trails go through Adams Co, and I've seen scurf pea there, so I hope they are along the trail!

Insofar as I know the paper formally describing this species has not yet been published, nor do I know in what journal it will appear. I thought it was supposed to come out sometime this year, but I've just heard snippets through the grapevine. But the caterpillar you shared certainly looks like this new species, which insofar as I know, only uses scurf pea, Orbexilum onobrychis. Once I hear that the paper and official name has been published, I'll probably make another blog entry about it.

Hi Jim, Can you say who is describing this? It looks like it might be closely related to Schinia jaguarina, which is what I have been calling specimens I have recorded from southern IN in association with Orbexilum. I'd like to compare my specimens (never seen the larva).

There were many sightings of this in Missouri this last summer and most were eating Orbexilum pedunculatum. They were in counties where we don't have O. onobrychis.

That's great news from Missouri Linda! This undescribed species is what we have in southern IN, associated with Orbexilum pedunculatum.