The Mount Vernon, Ohio Black-bellied Whistling-Duck that first came to light on June 20, 2012 and that I wrote about HERE, is still present. Many people have been to the suburban pond where the whistling-duck has been hanging out, and have had success in seeing it. And for a number of these birders, the whistling-duck has been a "state bird" or even a "life bird". If you are unfamiliar with birder-speak, the former indicates a bird that one has never seen in a particular state, and the latter phrase means a bird never seen before, anywhere.

But, a possible black mark against the Black-bellied Whistling-Duck's provenance has come to light... 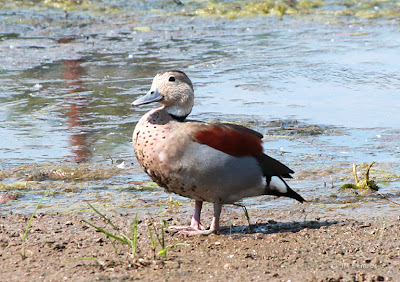 Some friends of mine were recently in the Mount Vernon area, and stopped in for a gander at the whistling-duck. They also found, in the exact same locale, the interesting bird in the photo. It is a Ringed Teal, Calloneta leucophrys. Ringed Teal are native to a fairly small region of South America, as seen in the map below: 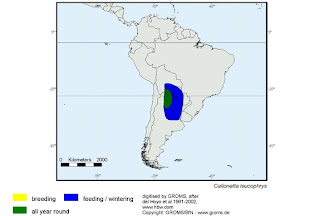 The chances of a wild Ringed Teal making its way to Ohio are only a half-millimeter above nil; there are no North American records.

Google "Ringed Teal for sale" and you'll learn how easy it is to obtain a pair of these beautiful ducks. All you'll need is about $100.00 - $130.00, which seems to be the going price range for a pair. The Mount Vernon Ringed Teal is certainly a bird that has escaped from an aviculturist, somewhere, and I don't think that even the most avid list-expansionist birder is going to try and make a case for it being a bona fide wild vagrant.

Now google "Black-bellied Whistling-Duck for sale", and you'll see that this species is also popular among those who trade in waterfowl. A pair will set you back about the same as a pair of Ringed Teal.

Does the appearance of an obvious escape - the Ringed Teal - at the same time and exact location as the presumably wild Black-bellied Whistling-Duck mean that the latter is also an escapee? Not necessarily, but it should cause us to wonder. BBWD does, after all, have an established pattern of vagrancy with an ever-increasing number of reports well to the north of its normal range. On the other hand, I have to wonder if some local breeder forgot to pinion (wing clip) his flock.

Short of someone actually running down a waterfowl fancier who lost a Black-bellied Whistling-Duck (and probably a Ringed Teal), we'll probably never know with certainty the origins of this whistling-duck. But rest assured, most birders - and the Ohio Bird Records Committee (a nine-member committee that serves to vet records of rare birds) - are likely to assume it is wild.

I served as secretary of the Ohio Bird Records Committee for seven years, and did a three year stint as a member before that. The question of waterfowl provenance was probably the thorniest issue that we regularly wrestled with, due to the frequency of many potential vagrant species in captivity. In some cases, there is just no way to be sure if the bird in question is wild or not.

A famous local example - although it wasn't reviewed by the OBRC - involved a Harlequin Duck on the Muskingum River in Zanesville ten or so years back. Harlequins occur in very small numbers along Lake Erie, but are almost unheard of at inland locales. The Zanesville bird turned up in winter, and many birders visited the site to tick it off. A few cautious skeptics - your blogger being one - put forth doubts about its wildness, but were mostly hooted down by the avid listing crowd. Come June, with the Harlequin Duck still present and routinely waddling up the river bank to accept bread crumbs from visitors, most opinions had turned and ultimately the majority consensus was that this Harlequin was indeed someone's escaped pet.

I posted a note to the ever-dwindling Ohio Birds Listserv about the appearance of the Ringed Teal at the Black-bellied Whistling-Duck site, and expressing that perhaps this bird's presence could cast a shadow over the assumed "wildness" of the whistling-duck. My post triggered the following comment (part of a longer post):

So I guess we should leave it to nine people to guess, rather than just one :-)

Jim, As my favorite comedian Ron White says, "you can't fix stupid!" lol! I'm with you on this one.

I think you're right, these two species are from South America, surely are ducks gone of its captiviy. The map is not the better, I´ve find one a bit more accurate here: http://www.natureserve.org/infonatura/servlet/InfoNatura?sourceTemplate=Ltabular_report.wmt&loadTemplate=Ldetail_report.wmt&selectedReport=&summaryView=Ltabular_report.wmt&elKey=650931&paging=home&save=true&startIndex=1&nextStartIndex=1&reset=false&offPageSelectedElKey=650931&offPageSelectedElType=Species&offPageYesNo=true&selectedIndexes=650931#rangemap, but the maps are all made in the North, in Argentina we have more and better records; the species is common were I live, in Buenos Aires province 500 km to the south.
The duck in your image is a male. You can see some pics I´ve taken in a lagoon near my house: http://avesbonaerenses.blogspot.com.ar/2011/12/pato-de-collar-calloneta-leucophrys.html

Thanks for the nice map and photos, Hernan!