About the Downy Woodpecker, Audubon (1842) said this: "[it] is perhaps not surpassed by any of its tribe in hardiness, industry, or vivacity". The Father of American Ornithology, Alexander Wilson (1832), also heaped accolades on our smallest woodpecker, saying that "the principal characteristics of this little bird are diligence, familiarity, perseverance".
I would agree with these great men, and offer up some evidence of the Downy's clever resourcefulness below. 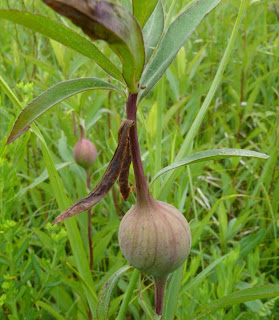 You've probably noticed these, if you've spent much time in goldenrod patches. While it looks as if the plant (tall goldenrod, Solidago altissima) has swallowed a golf ball, this spherical growth is actually caused by the goldenrod gall fly. The tiny fly injects an egg into the plant's tissue, and in response the goldenrod forms layers of very hard nearly woody tissue around the invading object. I wrote about this phenomenon in some detail HERE.

The upshot is that a very tasty succulent little fly grub is ensconced within that tough tissue, safe from all but the hardest working of predators. Enter the Downy Woodpecker, and an amazing series of photos kindly shared by Warren Uxley, naturalist with the Crawford County (Ohio) Park District. 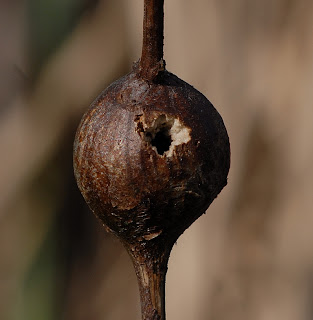 Photo: Warren Uxley
Look at enough of these goldenrod gall fly galls, and it won't be long before you see one that has been excavated. Such a hole could only be the work of the industrious little Downy Woodpecker. 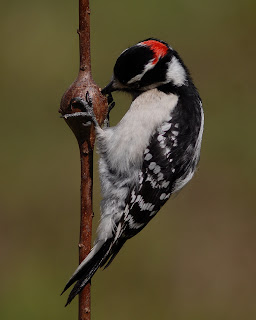 Photo: Warren Uxley
Voila! Caught in the act. The hard-working and intelligent little birds know all about these galls and what lies within, and make frequent forays into old fields to work over the goldenrods. 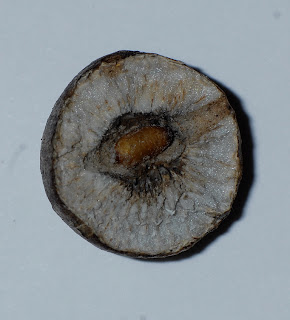 Photo: Warren Uxley
And here is the object of their desire, the tasty grub of the goldenrod gall fly. I've never eaten one of these, but must make the assumption that they are delicacy enough to warrant all of the work required to extricate one.

Bravo, little Picoides pubescens! And thanks to Warren for the cool series of photographs.
at June 02, 2011