Major Randel Rogers, Ohio Army National Guard, sends along news of an interesting report. Some of his men discovered a gang of Short-eared Owls sitting around on a bunch of National Guard jeep hummers. Why these owls would choose heavily armored military vehicles as a roosting spot is open to speculation, but I have my theory.

Thanks to Major Rogers, and J. Valentine and T. Friend for bringing the owls to our attention and snapping the following photos. The owl spot is along James Road on the east side of Columbus – a stone’s throw from the vast and vole-filled fields of Port Columbus International Airport. 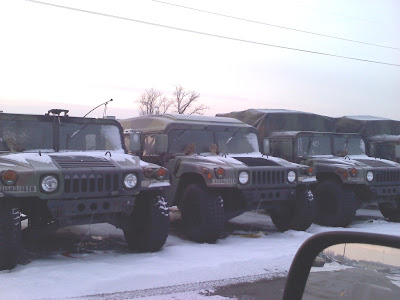 Click the pic and look closely – at least four Short-eared Owls can be seen sitting around on the hoods of the Hummers. And there were several others. Trust me – none of these photos are faked; these owls really are roosting on Army Hummers in a heavily urbanized part of Columbus. Again, this odd behavior shouts out for answers. 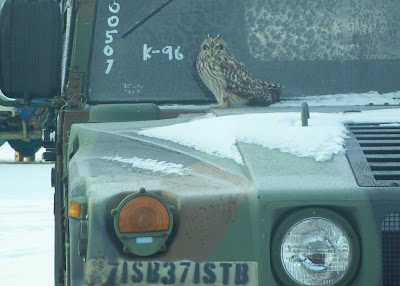 A closer view of one of the savage-looking and exceptionally clever beasts.

So why are the owls adorning military Hummers? Because of these. Meadow Voles. The nearby open grassy expanses of the airport undoubtedly support scads of the little rodents, which are a favored prey item of Short-eared Owls. But this still doesn’t explain the owls’ highly unusual selection of roosting in a military depot filled with heavily armored war craft.

I have a theory.

Our little furry brothers, the Meadow Voles, have been oppressed for thousands of years. And owls are The Great Oppressors. Think about it. You’re a guy – albeit a guy with four legs, furry, with stubby ears – who really doesn’t bother anyone, just tunnels about the meadow grazing on succulent plant matter. But every time you or anyone in your community pops above ground, death lurks in the form of large shadowy owls patrolling overhead. An eon of living with that threat would cause any class of oppressed animals to throw off their shackles, rise up, and attempt to cast out their tormentors.

The airport voles have become the rodent world’s Egyptians and the Short-eared Owls are the avian Hosni Mubaraks.

I believe these voles have begun The Fight to end their persecution. Voles aren’t dumb. By gathering a volatile mix of airport de-icing chemicals, decaying roots of fescue grasses, common road salt and their own dung, and fermenting the whole mess inside discarded sandwich baggies that litter the grounds, they’d have a highly potent explosive. By harvesting strongly flexible shoots of the numerous sandbar willows (Salix interior) that grow in the airport’s low swales, vole warriors could easily craft powerful catapults that could be used to launch Surface to Air Missiles (SAMS) packaged tightly in the sandwich baggies.

I suspect that a Vole Liberation Army (VLA) has developed technology that allows them to blast Short-eared Owls from the skies with their willow-fired SAMS. These guys send a few owls hurtling to the ground like flaming Roman Candles, and word’s going to spread quickly amongst the short-ears that a new Sheriff is in town. 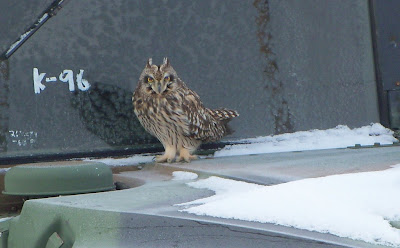 But owls are no dummies, either, and are further advanced along the evolutionary scale than their now arch-enemies the voles. And if you think that these feathered Attila the Huns are going to run from a battle, you’ve got another thing coming.

The owls’ problem is now a technological one. The Old Ways of conquering and holding the voles in the shackles of oppression no longer work. Merely plucking the tiny beasts from the grasses with their admittedly formidable talons is now an exercise in extreme peril. Send a few owls crashing to earth in a blazing heap via vole-fired highly explosive SAMS, and it’s time for a New Way.

Enter the National Guard. Brilliant and opportunistic, the owls would have long ago noticed the nearby depot with its fleet of highly armored and heavily armed Hummers. Probably, had the voles not upped the technological ante, the owls would have never tapped this resource. My hunch is that the short-ears are now hunting the voles under cover of darkness in these wheeled death-dealers. The voles’ SAMS would be impotent against such armored cars, merely exploding harmlessly against the Hummers’ flanks while the owls laugh and sneer from within.

Equipped with their new military hardware, the owls now have a wide range of armaments with which to deal with the voles: flamethrowers, heavy machine guns, incendiary bombs, light nuclear warheads, and powerful wrist-rocket slingshots, all wrapped up in a highly mobile SAM-proof wheeled vehicle.

I’d recommend that the Guard keep close tabs on their Hummers.

Hahahaha wow, great imagination...ugh I mean...yeah I think you're onto something with that theory!

This was a hoot!
I think you better be copyrighting this material and pitching it to Pixar.

Thank you, D. & C. The photos are 100% real - there really are Short-eared Owls roosting amongst the Guard's Hummers near the airport.

I confess to perhaps taking some creative liberties in speculative embellishment, but the photos begged for a good story.

These long winter nights have a benefit,, can get the creative juices flowing and ya come up with a prize winning novel,, "War and a piece of meadow vole for lunch " Great article Jim and it sure was a neat find by Roger and his men.

I think the snow has finally gotten to you Jim...

By the way, Tim Fairweather at Sandy Ridge Res. in Lorain sent photos of Shorties roosting on decks and patio furniture of a housing development next to the park.

You bet that's a good story wrapped around some very amusing pictures.

That's what I meant about the copyright.

You wait. You're gonna look up at a future Disney movie and go "Hey! that was my story . . "

Now you'd have to work it so that the voles and owls end up cooperating in order to help the National Guard save the US from a terrorist attack.

I think that your theory is a perfectly legitimate one. I believe there is currently a documentary out about this group of owls, something about the guardians. I'm not real sure about it. I appreciate your scientific thoughts on the matter but feel it would better if you don't let the National Guard know. They might no longer leave the keys in their vehicles. The secret is safe with me.
Nellie

I just saw my first short-eared owl on Monday! My good friend, Ken Keffer, called to say that he spotted one sitting on a post next to Benton-Carroll Rd. I jumped in the car and hurried to that spot and the bird was still there! I drove right up to it, rolled down my window and filled by binocular with that wonderful bird!