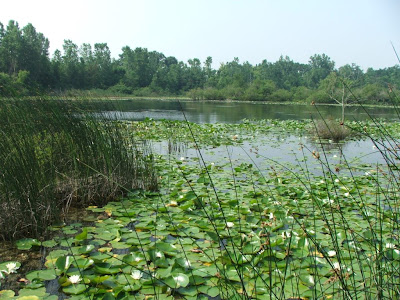 McCracken Fen State Nature Preserve, Logan County, Ohio. This is a very interesting place, but you don't want to visit alone. It's probably the most potentially hazardous place that I've explored, and besides, one MUST get a permit to visit, and hopefully the permit issuers will note that the permitee must have company.

This blog has been sitting on the shelf for a few months. I often save photos from this trip or that, but other things come along and preempt their posting. Well, after spending a good chunk of today essentially outdoors, with temps never warming much past 20 F, it's time to go back to summer, at least virtually. 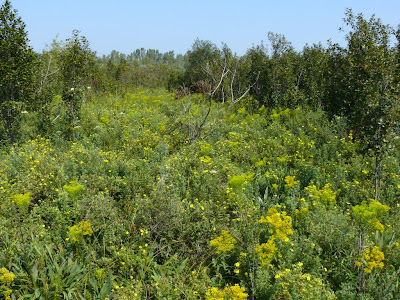 Back on August 30, I met up with fellow botanists Dan Boone, Jim Decker, Tom Arbour, and Brian Riley and set out in search of some rare plants. McCracken Fen certainly has them. Guy Denny showed this place to me nearly 20 years ago, and at that time, no one had been in it for a while as the fen was so thoroughly overgrown with thicket-forming shrubs. It was essentially impenetrable, they said.

But in the years since Guy had last visited, a mining company had purchased the fen and done their best to strip it of its peat. Apparently the business went bankrupt before they could scoop all of the peat away, and the end result was as if a giant had tossed the whole wetland in an enormous milkshake mixer and stirred everything up. Succession was set way back, and plants popped from the seedbank that probably hadn't seen the light of day in decades. Plus, one could once again walk through the place with some ease.

Fascinated by seedbank disturbance and the rebound of plant diversity, I enlisted Greg Schneider's help and we made many an expedition into McCracken in an effort to thoroughly document its plant life. That led to the publication of this paper: McCormac, J. S. and G. J. Schneider. 1994. Floristic diversity of a disturbed western Ohio fen. Rhodora 96:327–353 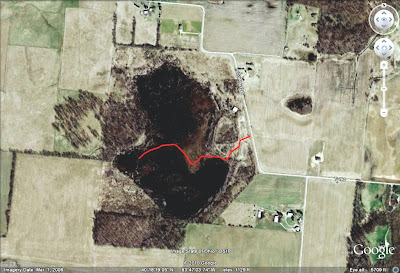 The rarest species that we found was a tiny sedge called Smith's Bulrush, Schoenoplectus smithii, which at the time was not known to exist anywhere in the state. Stimulated by the disturbances of draglines that had inadvertently created large peaty mudflats, the bulrush had come up by the thousands.

And Smith's Bulrush was priority one on this expedition. The problem? Getting to the site. The above map's red line approximates the route that we had to take to get back to the place where we had last seen the bulrush, some five years before. 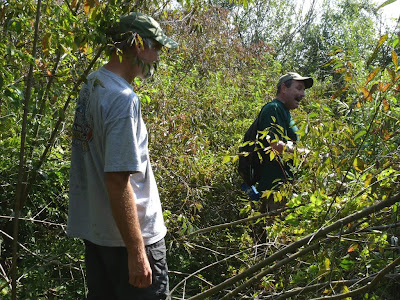 There is an old saying in field botany (at least I say it): "To find the rarest plants, take the path of greatest resistance". Here, Jim Decker (L) and Dan Boone wade through a nearly impenetrable thicket of dogwood and, worse yet, Swamp Rose with its abundant flesh-lacerating thorns. Pushing through this stuff is hard enough, and we all emerged scarred and bloody, but you've really got to watch your footing. It's all quite soft and boggy, and one misstep can send you in to your waist, or deeper. 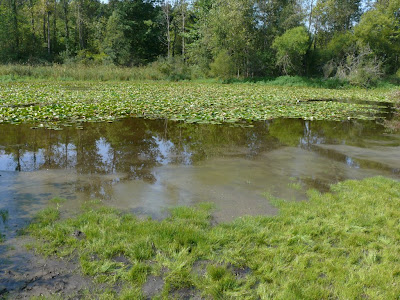 This is the site we had to reach, and the view once one bursts from the thicket. That soft green mat on the foreground is quaking treachery; a thin sheet of muck over open water. And where, a mere decade prior, scads of Smith's Bulrush grew. We could find none. It's had its day in the sun, and even the light pressure of competition of other small sedges has displaced it from an above-ground niche. The bulrush is still there, just in seed form and under the ground.
Plants such as this bulrush have a "boom and bust" ecology. When conditions become suitable for them, they spring to life and produce scores of tiny bone-hard seeds called achenes. This population of Smith's Bulrush, over the decade or so of boom times that it had most recently at this site, probably produced hundreds of thousands of seeds if not more. They may lay dormant for another century, but when some traumatic disturbance once again rips them free from the ground, the plant will once again run rampant. 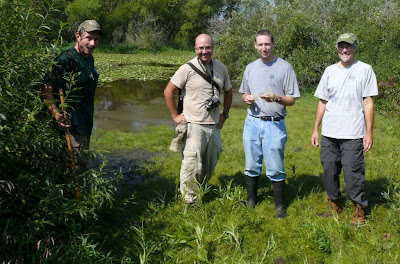 This is an intrepid and knowledgeable bunch (L to R): Dan Boone, Tom Arbour, Brian Riley, Jim Decker. It's always cool to be out with a cast of characters in which at least someone will know EVERY plant encountered, no matter its condition or stage of growth.
But, we nearly missed a cool one right in the spot above, and its discovery somewhat atoned for the disappearance of the Smith's Bulrush. Looking down at my feet, I noticed a spindly little grass and realized it was Philadelphia Panic Grass, Panicum philadelphicum, a species that is quite rare in Ohio and one I had only seen once before. 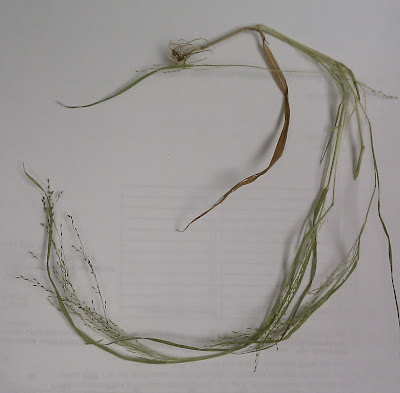 Here's a specimen - a plant only a botanist would get excited over. Thin and wispy, it exudes a certain charm, and under close inspection has purplish-black, or nigrescent, fruit. The taxonomy with these things is somewhat unsettled, and there are those that would carve this one out as Panicum tuckermanii, and maybe that's for the best. Even that variety/species is rare in Ohio, though.
So while we may have come up short on the bulrush, we once again proved that thou who takes the path of greatest resistance will be rewarded.
FOOTNOTE: Tom Arbour rediscovered Smith's Bulrush along Lake Erie this year, in the vicinity of a site where Dr. Ronald Stuckey had found it several decades ago. See Tom's post about this find HERE.
at December 14, 2010

Jim- I think that some of my wounds are still healing from that day as we bushwhacked through the shrub swamp to get to that peat flat. It was a great day, for sure.