A quick stroll through Gross Woods 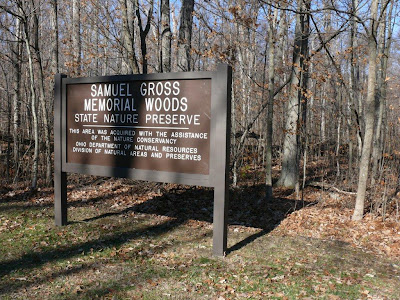 While not much of a place in the size department, 49-acre Gross Woods State Nature Preserve provides a nice snapshot into the past and a time when woodlands such as this one stretched for miles. I found myself in west-central Ohio today, and stopped in to visit this Shelby County gem. 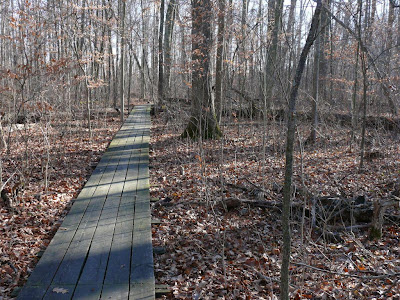 A boardwalk loops through the property, and offers easy - and dry - access. Doesn't look too wet now, I know, but come back in spring and these woods will be swampy as can be. Full of interesting amphibians, too. 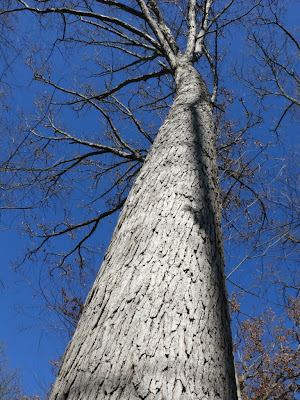 I was here mainly to admire sylvan giants such as this massive White Oak, Quercus alba. When acquired as a nature preserve about 30 years ago, Gross Woods was full of monster timber. Several hurricane-force wind storms since then have dropped a number of the largest trees, but there are still plenty of sky-scraping whoppers to admire. 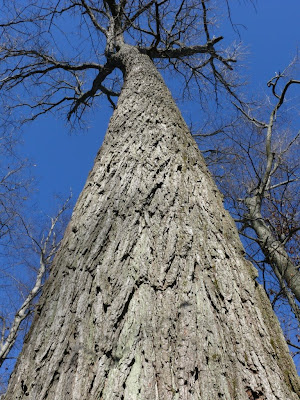 A massive Swamp White Oak, Quercus bicolor, soars skyward, its bark plated with thick ridges. The bicolor of the scientific name stems from the leaves, which are green above and distinctly whitened below. Swamp White Oaks thrive in waterlogged or seasonally saturated soils. 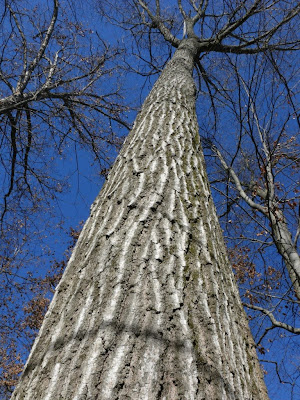 Red Oaks, Quercus rubra, typically occur on mesic soils - sites that are moderately well-drained but moister than places where White Oaks thrive, but drier than sites favored by Swamp White Oaks. The bark of Red Oak is quite distinctive, with its broad low ridges that are gray on the summit. 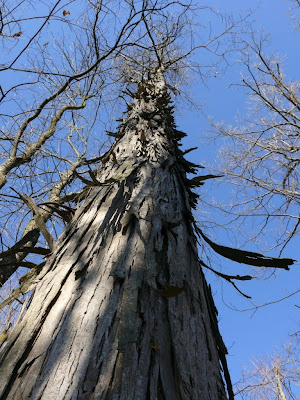 Like a tree in need of a good brushing, the plates of bark peel from this Shagbark Hickory, Carya ovata. Such loose bark, which is termed exfoliating, offers excellent shelter for many animals. Bats, in particular, often roost under the loose bark of hickories. 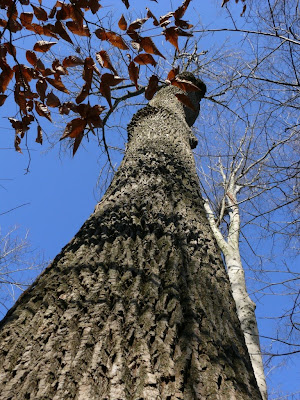 One of Ohio's five species of ash, Green Ash, Fraxinus pennsylvanica, prefers wet soils. Its bark is very "neat" in appearance, with uniform ridges. Three of the others occur here as well: Black Ash, F. nigra, White Ash, F. americana, and the rare Pumpkin Ash, F. profunda. The leaves intruding in the top left of the photo belong to a nearby American Beech. 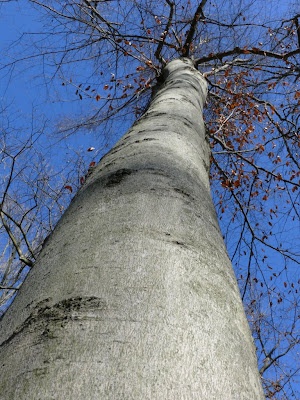 And here's a fine specimen of an American Beech, Fagus grandifolia, with its smooth elephant-skinned bark. Unfortunately, beech bark proves to be an irresistable substrate for carvers, and nearly all of the readily accessible trees are defaced with people's initials and other offending graffiti. Seedlings of this species are often called "sons of beeches". 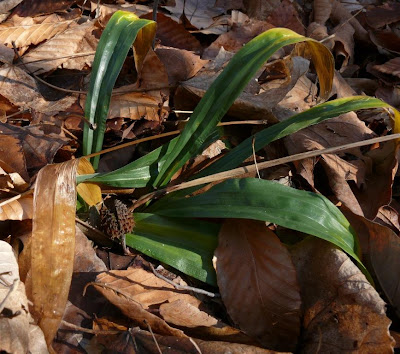 While some foresters may not think much of beech trees, as the lumber isn't highly prized, they are keystone species in the forest ecosystem. A great many species of animals use beech, as the trees form natural hollows and cavities as they age, providing niches for flying squirrels, barred owls, raccoons, and many more.
Even a host of plants depend on American Beech, or at least share their habitat. Above is the Broad-leaved Wood Sedge, Carex albursina, still bright and green. It typically occurs in beech-maple woodlands. At the base of the sedge, a beechnut can be seen - this species seemed to produce a lot of fruit this fall. 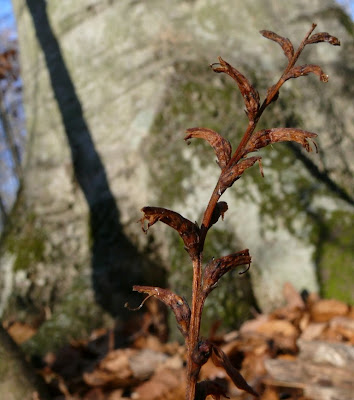 This plant depends entirely on beech for its existence. Although now withered and brown, this plant doesn't look radically different even at its peak of bloom. It is Beech-drops, Epifagus virginiana, an odd parasitic plant that taps into the roots of beech trees and thus gains its sustenance. It has no need of manufacturing chlorophyll, and as a consequence has no green coloration. 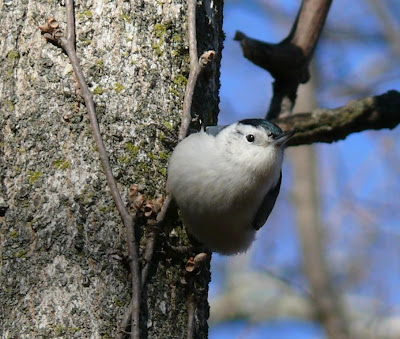 There were plenty of bark-loving tree creepers about, including this inquisitive male White-breasted Nuthatch. A noisy family unit of Red-headed Woodpeckers romped through the oaks, and a Pileated Woodpecker was heard and its handiwork - like someone took a jackhammer to the tree trunks - was evident. Both Hairy and Downy Woodpeckers were about, as were numerous Red-bellied Woodpeckers, and I heard a Northern Flicker.
If you want an easy hike and the opportunity to admire some large trees and plenty of the woodpeckers who love them, take a hike at Gross Woods sometime.
at November 28, 2010

I wonder if that hickory is a Shellbark, which prefers wetter areas and seems to typically have thinner plates that peel up on the bottoms more.

No shellbark in that photo, Ben. Shagbarks commonly grow on raised knoll in such sites, just like those white oaks...

Another great article! Thanks!!

Too bad you didn't get a sapsucker for the Ohio woodpecker "cycle".
I've only done that once myself

Yes, Brian, a bit more time to sleuth around and I may well have picked up sapsucker to get the woodpecker slam. Other than Black-backed and Red-cockaded, of course :-)

Also, should have elaborated: Ben has a good point in mentioning Shellbark Hickory. If you aren't up on hickories, it is our other shaggy-barked species and often is assumed to be Shagbark. Next year, once the leaves are back on the trees and they're easier to separate, I'll try and publish some info on these trees.

Hello Mr. McCormac,
Could I please pester you to suggest an Ohio tree identification book for a newbie? I loved your article and would like to have a better understanding of the trees in my area. If you could please respond privately at csblairhousr@gmail.com, I would very much appreciate it.

Thank you very much for your time,
Clara Bishop Blair, a.k.a. “Anonymous” poster and mounted fox chaser

P.S. If you would prefer a message via Facebook, I’m in Cincinnati.

Your e-mail bounced back and there's a bunch of Clara Blairs on FB and I have no idea which is you, so here's a reply:

Two good books for trees are:

The Sibley Guide to Trees

Trees of Michigan, by Linda Kershaw

Sibley's is primarily just an identification book, but the Michigan guide includes lots of interesting information about each species, nearly all of which occur in Ohio. We do have a handful, especially down your way, that aren't in that book, though.

Hope that helps, and happy botanizing!