A license to bird

Some birders like to wear their passion on their plates. For some time, I've been snapping shots of various bird-related license plates, and have a amassed a fairly vast assemblage. Not just birds, either - anything related to natural history.

Hanging out at birding hotspots, like Magee Marsh, Cape May, the Rio Grande Valley of Texas and the like greatly increases ones odds of finding a "life plate". Below are a few from my collection, nearly all from my home state of Ohio.

One of my favorites. It's clever. And in code. A birder will know it's meaning, though - sort of like a secret handshake. 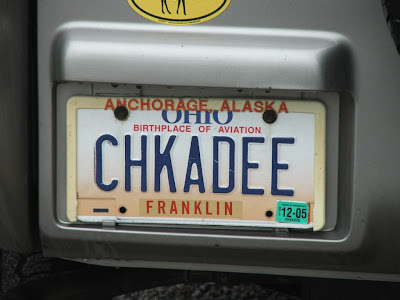 Various iterations of chickadee are popular. 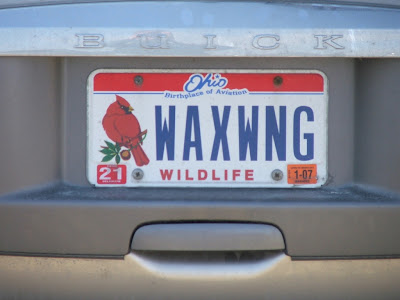 A sleek plate featuring a slick bird. Note: it's a double-whammy. That cardinal plate raises funds to support Ohio's non-game program, and the money is used for all sorts of good stuff, including those popular bird CD's and booklets, produced by the Ohio Division of Wildlife. Get a cardinal plate! 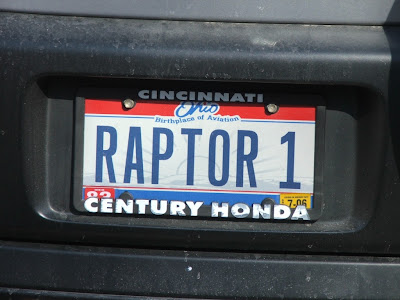 Ah, a fan of the hooked bill/sharp talon set!

No group of songbirds is more popular than warblers, at least in this part of the world. It's likely that every decipherable form is taken.

A crow and jay fan. And another code; pretty much only birders will know the meaning. And...another cardinal! Of all the special plates sold by the Ohio Bureau of Motor Vehicles, this one is Numero Uno by far. Ohioans do support nature and conservation!

This one might flummox some birders. It's the scientific name - at least nearly so - of the Wood Duck (Aix sponsa).

We'll assume this one belongs to an avid owler. Either that or they just like to yell a lot. The bumper sticker suggests an avian bent, though. 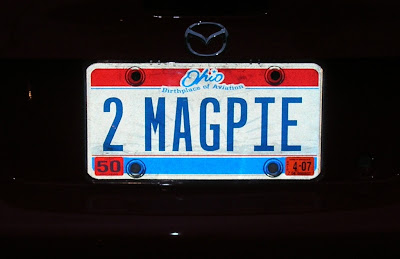 Hmmm... I suspect this one commemorates some sort of fantastic experience with the Heckyll and Jeckyll of the corvid world :-) 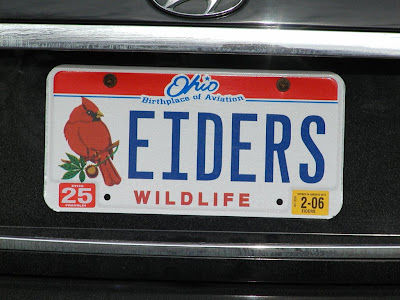 Finally, my own plate. It's adorned my wheels since 2004, and I am happy to say, just switched over to a new, very environmentally friendly vehicle last Saturday. We don't have many eiders here in Ohio, but I've seen two of the four on our waters. Might be waiting a while for the Steller's and Spectacled, though.
If you've got any cool bird plate photos, send 'em along.
at October 21, 2009

What a fun collection. I have often admired these plates. It is fun to be going along on a long driving trip and see one of these pass by. I always wonder if they are going where I happen to be going.

Why did I think ‘Eiders’ was an athletic team? (Don’t drive through Worthington with those expired stickers ; ) And I imagine the Screech plate reduces tailgating, perhaps more than a bumper sticker that reads “I brake for …no apparent reason.”
Too bad more people didn’t purchase the Scenic Rivers plates. I’ve had my old-style heron plates for at least 8 years, I think.

Did you get a red vehicle to coordinate with your cardinal license plate? I'm guessing not since you already have a red ferrari. Blue or black would be my best guess.

Ahh, the birding elite. I don’t know how one chooses a species. I can’t even commit to a phylum. (And the DMV didn’t like any abbreviations of my blog name ;^ )
I think Jim should explain the red Ferrari comment …which I assume is a private joke. And come on, tell us the type of wonder vehicle you procured! It’s a long ride on a scooter to Alaska and back carrying those other Eiders.

I do indeed have a red Ferrari. You can see pix here: http://jimmccormac.blogspot.com/2009/03/poisonous-mammal.html

That car is a bit awkward for daily commuting, so the EIDERS plate now graces an '010 Volkswagon Jetta TDI. Diesel-powered and 50 mpg on the freewaY

I haven't yet committed to a bird on my plates, but I do have a Cardinal plate, which I'm very proud to sport. Also, after coming back from the MBS in September I added the 2009 MBS and OOS stickers to my back window... along with my Cornell Lab of Ornithology and the Wilds stickers that were already on my side windows. So my car screams out "bird nerd" in subtle ways.

Thank you for explaining the Ferrari. I was worried. I don’t know how I missed your posed - I mean poisonous mammal post. I’d read the ones previous and following. Mental blockade I’d say.
Congratulations on your new car! Very svweet.