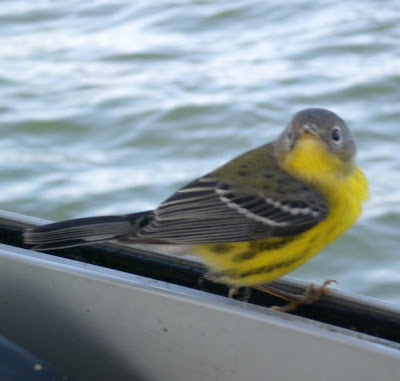 Fall male Magnolia Warbler takes a cruise nine miles out on Lake Erie, off Lorain. Mike Durkalec sent along the photos and story of this feathered hitchhiker that sought a free ride south. 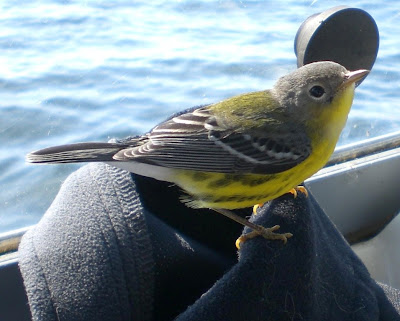 While out on a fishing expedition a few days ago, Mike and his buddies were surprised when the warbler flitted aboard and promptly made itself at home. Migrant birds alighting on boats is nothing new, but it is always a cool thing to experience.
This bird is headed out of the cool conifer-dominated boreal forests of Canada, to a very different wintering habitat. "Maggies" overwinter throughout much of Central America, and in the Caribbean, and are far more general in their habitat preferences down there than on the breeding grounds. Crossing the open waters of Lake Erie is nothing for a bird that is headed 1,500 miles or more to get to where it's going. There'll be much more arduous water crossings than this along the way, but you can't blame the guy for stowing away and getting a free ride! 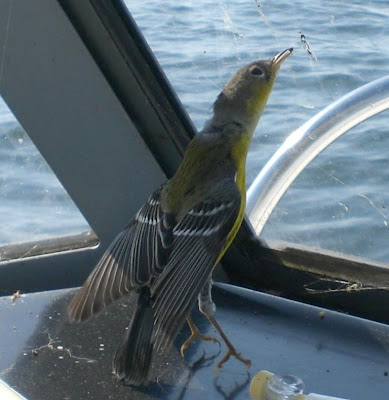 Jumping for a spider. I suppose you could say the bird earned its keep by cleaning up the miscellaneous arachnids that had occupied the vessel.
Here's an interesting fact about this bird's name. The first specimen was collected way back in 1810 by the "Father of American Ornithology", Alexander Wilson. This collection became the type specimen, which is the collection upon which the organism was originally described. Well, Al shot his warbler from the boughs of a magnolia tree, in which the migrant warbler just happened to be foraging in en route to its boreal breeding haunts. Thus, he named it after a southern tree which probably plays no important role in the biology of this bird. 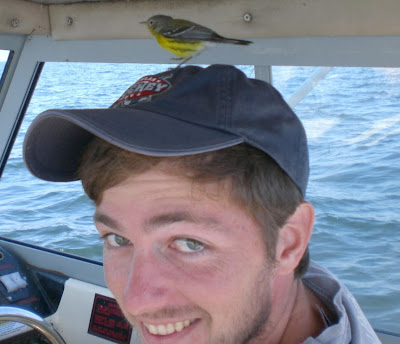 The warbler graciously poses on Mike's friend Mark's cap. A nice passenger to pick up, and here's hoping it makes it to the tropics, and back to our latitude again next year.
Thanks to Mike for sharing these great photos, and the story.
at September 12, 2009

Those are some great photos - particularly the one of the magnolia warbler going for the spider. Thanks to you and Mike for sharing the story!

That, Jim, is a great story, with great pictures from Mike. Thanks to you and to him for sharing it. I'd have been thrilled to have had this experience while recently fishing on Lake Erie near Kellys Island.