I recently got a tip about an active Chuck-will’s-widow nest, and simply couldn’t miss the opportunity to see it. So, following two days along Ohio’s north coast – Lake Erie – I then drove to the other end of the state to go chucking.

Mucho gracias to Mark Zloba and Chris Bedel of the Cincinnati Museum for clueing me in to the chuck nest. Seeing it was a fantastic opportunity, but I must keep the exact locale a secret other than to say it was in the sprawling 14,000-acre Edge of Appalachia preserve in Adams County.

An Adams County barrens prairie. These habitats harbor tremendous diversity of flora and fauna, including many endangered species. The breeding birds are spectacular, too. From this spot, I could hear Blue Grosbeak, Prairie Warbler, Yellow-breasted Chat, and many others. Come here at night and you’ll hear the loud incessant onomatopoeic song of our target: chuck-will’s-widow, chuck-will’s-widow! The nest was along the margins of a barrens opening like this one, slightly back into the woods.

Find the bird. Cryptic in the extreme, an incubating Chuck-will’s-widow resembles a pile of dried oak leaves and can be nearly impossible to see, even if you know exactly where the bird is. It’s dead center in this photo, and clear as a bell.

A bit closer; you can probably see it now. Incredibly little is known about the breeding habits of this jumbo nightjar. And they are big, nearly twice the weight of a Whip-poor-will. Anyway, there are no comprehensive studies of nesting chucks, so not much can be said definitively about breeding success rate, behavior of fledglings, frequency of feedings, and other basic information. However, both the Cincinnati Museum and The Nature Conservancy, who jointly manage the Edge of Appalachia mega-preserve, encourage and facilitate all manner of research. They have been working with a professor to plumb the mysteries of the chucks, and this work will hopefully result in much better breeding biology info.

We do know that chucks generally lay two eggs, and incubate for about 20 days. The chucklets open their eyes the first day out, and can run around a bit the second day. They are capable of at least short flights by their 17th day, and sometime in late summer or fall slip away to the tropical wintering grounds, where nearly nothing is known of their habits. Interestingly, limited data suggests that adults winter primarily in the Caribbean, while first-year birds winter in Central and South America.

And here we are, cropped in close. Chuck-will's-widows resemble piles of dead leaves, and are essentially impossible to see when roosting on the leaf litter of a forest floor. They are strongly associated with dry upland woods, and oaks are typically dominant in such sites. Much of the leaf litter in this photo is from Post Oaks, Quercus stellata, and the chuck's plumage matches them perfectly. They are also linked closely to habitats that support lots of Red Cedar, Juniperus virginiana, and various pines, and Virginia Pine, Pinus virginiana, was present here as well as lots of cedars. These habitat factors coupled with abundant suitable insect prey are likely what makes the Ohio Brush Creek valley an ideal northern outpost for this southern bird.

Looking straight into the face of a Chuck-will’s-widow. If you are an animal smaller than this bird, you do not want to be in its sightline. Chuck-will’s-widows have interesting food preferences for a nightjar. Studies indicate that large beetles are likely their number one food source, and we’re talking noisy winged pellets like those brown june bugs that crash into your night lights. In fact, researchers at the Black Swamp Bird Observatory recently captured their first Chuck-will’s-widow in over twenty years of banding, and report that its mouth was full of june bugs.

Dietary preference #2 is moths. I’ve driven down Adams County back roads in the vicinity of this nest on warm summer nights, and there are virtual blizzards of moths. Chuck food abounds here, and this is no doubt one reason why the only dependable breeding locale in Ohio for this species is the Ohio Brush Creek Valley of Adams County. They were first found here in 1932.

After the predictable insect fare, the chuck’s chuck wagon gets a bit weirder. In times of desperation, apparently, they are known to capture small tree frogs and other amphibians. And seemingly whenever the opportunity presents itself, they will grab and swallow small birds, and even bats! Some of the documented species of songbirds that got vacuumed up by Chuck-will’s-widows include Palm, Hooded, Worm-eating, Yellow, and Cape May warblers, Common Yellowthroat, Swamp Sparrow, Carolina Wren, and Cuban Emerald (in the Caribbean, presumably).

This fantastic shot comes from the Black Swamp Bird Observatory, of the bird that they recently captured. This is the middle toe of the chuck’s foot, which is modified into a brushlike appendage. The bird uses it to preen its rictal bristles. These are the stiff hairs that jut outward around its mouth, thus increasing the gape, helping to sweep in insects that otherwise might just be missed.

As an aside, BSBO does tremendous research and educational outreach, sharing fascinating tidbits such as the above. Consider becoming a member and supporting their work; JUST GO HERE. 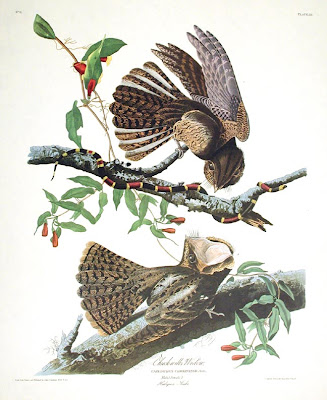 One of my favorite works of John James Audubon. He apparently witnessed a scene such as this, including the snake, which he referred to as a “Harlequin Snake”, apparently thinking it harmless. But, he has depicted the highly poisonous Coral Snake, so it is good that JJ presumably didn’t mess with it, since he apparently wasn't big into herpetology. The plant is an interesting beauty, too: Cross-vine, Bignonia capreolata. This is a southerner, reaching its northern limits along the Ohio River, and Adams County is one of the Ohio hotspots for it, just as with the Chuck-will’s-widow.
at May 28, 2009

Wonderful-looking habitat in Adams Co. Love that scenery shot. As well, great shots of the Chuck herself. I especially enjoyed the detailed information regarding the Chuck's diet. And thanks for sharing the JJA painting, too!

Such a fascinating bird - wow! Thanks for sharing those photos and all that incredible info. See you later today at the Wilds!

Jim,
Have not been on internet last several days with family visiting. Just got caught up on your recent posts, very interesting, always enjoy reading all your posts! That toe comb is a first for me. Having seen the Chuck-Wills-Widow some time back on my life list I try when listing to find all relevant facts. I did not know about the toe comb, how interesting. Your pictures are great and I did not see her until the third shot view and then went back and saw her in the first 2 shots. And, part of that old snake saying "black on yellow can kill a fellow" I am surprised at Audubon's apparent casualness. His work and art is without equal.
Gary Wayne

I really enjoyed reading this post - lots of great info and it was cool to see this one so close! Thanks!

OMG you got to see the nest!!! I love to hear them sing. I got to watch one sitting on top of a snag singing his heart out one summer. It reminded me of a potoo sitting there.