I had the great fortune to stumble across one of our most interesting mammals the other day. Charlie’s Pond, a place seared forever into birder’s consciousness as the site where one or more cooperative Black Rails spent part of last summer, includes some remaining fragments of the formerly vast Pickaway Plains, a large prairie now largely obliterated. With the exciting discovery of some cooperative Smith’s Longspurs in western Ohio, I took a quick trip to the Charlie’s Pond area, as this site once produced numerous sightings of these secretive open country sparrows.

Didn’t see any longspurs, but I did see some “striped gophers”, or Thirteen-lined Ground Squirrels. It sports a mighty robust name for such a tiny little beast. Even its scientific name is a mouthful: Spermophilus tridecemlineatus.

Ground squirrel on sentinel duty. The little burrowers are very vigilant against invaders, and post a guy to watch for interlopers. The guard stands erect, stretched to his full nine inch height, carefully watching the landscape. If something suspicious should appear, he alerts his brethren and all quickly disappear below ground.

The view from the squirrel’s perspective. A seemingly endless expanse of open landscape with lots of short grass, their preferred habitat.

We zoom in on the squirrel pulling guard duty. I didn’t have time to crawl around and wait for him to become used to my presence, but I hope to spend more time with them later this summer. With some patience and effort, they will allow closer approach. We’re in close enough to see the stripes that give it its (mis) name. You see, “Thirteen”-lined Ground Squirrels actually have twenty-three stripes: twelve dark, and eleven light. But “Twenty-three-lined Ground Squirrel” just doesn’t have the same ring to it.

His burrow, and they never stray far from these escape hatches. Clever little rodents, the squirrels scatter the tailings far and wide, rather than let the diggings accumulate at the entrance, which would make the burrows more conspicuous. These subterranean warrens can go down a few feet and tunnels might be six feet long. The squirrels probably just emerged. This species is a true hibernator, spending six months or more underground in a deep Rip Van Winkle-like slumber. They go down in October and don’t emerge until April. 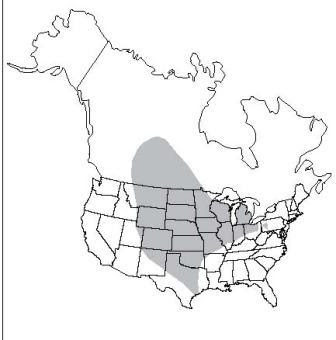 Thirteen-lined Ground Squirrel range map. Ohio is truly a crossroads state, and we’ve got, or at least had, a strong prairie influence from the west. During the much warmer and drier Xerothermic Period of about 5,000 years ago, prairies expanded eastward, as did some of the characteristic prairie animals. This is the only Spermophilus ground squirrel that made it this far east; go to the western U.S. and there are twenty other species. 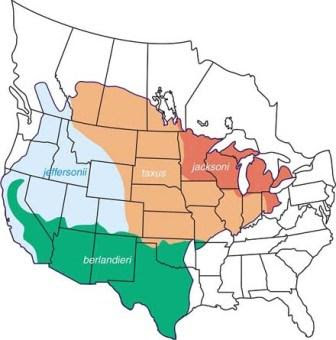 This map is of that ferocious digger, the American Badger, which probably digs out many a ground squirrel from their burrows. Note how once again Ohio is the eastern terminus for this prairie animal. 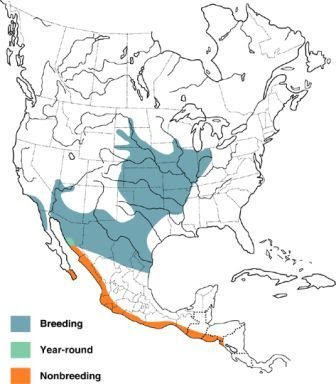 Some birds expanded eastward along with the mammals. This map depicts the range of the Bell’s Vireo, and once again the Buckeye State has the easternmost breeders. Nearly all records of nesters and territorial birds come from the former prairie regions of Ohio. 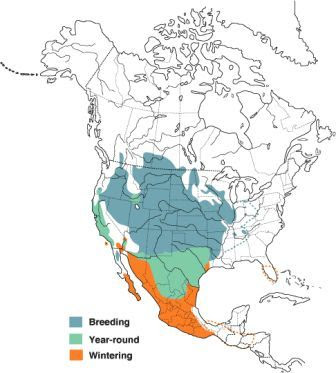 One more example – there are scads of others – of an eastward range expansion – the Lark Sparrow. Long-term shifts in temperature resulting in much more arid conditions, or much wetter periods, are a natural phenomenon, and the critters and plants migrate accordingly. Species like the Thirteen-lined Ground Squirrel are fascinating relicts of Ohio’s prairie past.
at April 17, 2009

I didn't know, until recently, that we Ohioans had such an animal as the Thirteen-lined Ground Squirrel. I was very intrigued by it and am envious that you got to see the little bugger. Thanks for posting the photos and info.