Not long ago, one of my friends approached me to report a "mole" raiding her bird seed supply in the garage, and making a cache of the booty on a nearby shelf. This certainly didn't sound like the hijinks of any Eastern Mole that I've ever met, and I figured it was probably an even more interesting and little-known mammal.

As with the Meadow Vole I recently encountered, fate was not kind to our mystery seed-raider, but did intervene to allow us another learning experience. When I was quizzing the mole-person about field marks, she let on that the beast had expired. "What! You have it?" enquired I. And she did, so I convinced her to bring in the carcass, which has languished in the freezer until today, when I brought it out for photos.

And here it is - the mole-like thief of seed. This tiny little brute is a Short-tailed Shrew, Blarina brevicauda. They are surprisingly abundant throughout Ohio and the upper midwest. And as we shall learn, they are indeed poisonous, and I'm not making that up. Ridiculously hyperactive with a metabolism that races like a meteor, I think they sometimes essentially just blow up - their heart erupts. I've found them several times dead but in perfect shape, with no obvious signs of trauma.

Aptly named, these Short-tailed Shrews. There are a number of other species in these parts, but only one, the Least Shrew, Cryptotis parva, would have such a proportionately stubby tail. Least Shrews are much smaller and browner, though.

In the photo above, I enlisted the help of several other strong men to move the shrew carcass into a position where it could be compared with my 1992 Ferrari F-40. Now you can clearly see not only the herculean proportions of the shrew, but also the potential danger posed by these bloodthirsty beasts.
Also, using the Italian supercar as a prop allowed me to satisfy the hundreds of readers who have written in asking if I could someday model a dead shrew with one of Enzo Ferrari's creations. I chose the F-40 in part because I own it, but also because the F-40 was launched just prior to the Old Man's death in 1988. Enzo tasked his engineers with designing the world's ultimate road-going supercar in order to stave off the boys over in Bolognese, Lamborghini, who had released the outrageous Countach in the 70's, and until the twin-turbo 478 horsepower F-40, nothing in Ferrari's stable could match the Countach's performance. 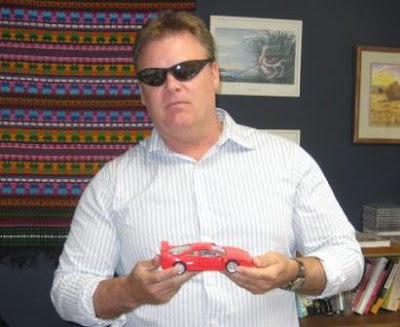 Yo, man. Told you it was mine. Eat your heart out dudes, and chicks, form a line.
Now that we've established the shrew's length at four to five inches with the aid of the only Ferrari I'll likely ever own, time to look at its pointy kisser. Shrews are very distinctive because of the shape of their nose - much different than moles, mice, or other small rodents. Their pelage, or fur, is amazingly dense and velvety - good protection against the cool damp earth that they spend much time tunneling through.

That auger-like snout coupled with strong front legs and feet permit the shrew to rapidly and effectively bore through the earth in a frenzied nonstop hunt for victims to kill and devour.

If you were an earthworm, beetle, grub, centipede, or even another small mammal such as a mouse, you wouldn't want to see this face rapidly snuffling towards you. I wasn't joking about the poisonous part. Shrews are incredibly ferocious, violent predators who may attempt to take out anything that moves, up to their size or maybe even larger. They'll eat seeds in a pinch, but are much more the bloodthirsty killers than some namby-pamby tofu-eating vegetarians. Gram for gram, this beast might be the most formidable, dangerous animal around.
The saliva of Short-tailed Shrews is laced with venom produced by small glands near the mouth. This venom allows the shrew to quickly paralyze victims and effectively immobilize prey with deep quick bites often administered to the victim's face and neck. Animals unfortunate enough to encounter a shrew are sometimes torn asunder and devoured while still alive but largely helpless due to the paralyzing effects of the venom. People who have been bitten report that the bite is quite painful, and ill effects persist for up to several days.
It truly is a good thing that nature, so far, has decreed that shrews will be small.
at March 26, 2009

Yikes! I had no idea...
Very funny post. I have these little demons tunneling in and out of a side garden in my yard. I'll be sure to keep my fingers away from their mouths!

What an amusing post. Oh yes and educaional. Some sort of shrew met its death in our garage this year too. I have a picture of it. I will look to see if it is this one.

Wow, I was terrified at the thought of a 6 foot long venomous mammal lurking around the Ohio countryside. I am glad you clarified the scale of your Ferrari.

I have also just purchased your Birds of Ohio book and enjoy it quite a bit.

Keep up the good blogging.

I will remember not to EVER provoke one. Yikes.

We have a little guy like this who lives under our bird feeders...just a small gray flash with a long nose.

I say Yikes too...I am sure glad those critters arent as big as a real Ferrari.

I once saw a baby mouse that was as big as a Winnebago. But don't worry -- it wasn't poisonous. Clearly your post is a cry for help from a guy who has a "need for speed".

Eeek! What a frightening creature!!

(And, the shrew is pretty scary, too.)

Great! thanks for posting that- my cat caught one last year and I thought it HAD to be a mole, although it sure didn't look like what I thought they should! Didn't know we had shrews around here (Toledo). Also didn't know they got 6 feet long! Kitty must have caught a juvenile ;o)

Considering the bite, I’m surprised ‘house’ cats catch them often.
I was going to tease you about posing dead animals, but you did refrain from showing the shrew in the driver’s seat. And I myself have photographed dead insects and others in the occasional model car.

who knew heather shrews were so mellow because they chew on willow all day? interesting stuff.

Thanks for the fun reads.

Thanks for the most informative article. Our cat found one of the little venomous savages this morning, likely bringing it up from the basement and proudly depositing it on my mother's bed as a most thoughtful gift to set her heart aflutter first thing in the morning. We thought (or at least I did), that the little fella was a mole. We checked pictures on the Internet, but couldn't quite match corpse to image to make a positive identification. We came across your post about the shrews, and Eureka!, that's what we have. The poor little rodent was quite dead of course, but in perfect condition, with a beautiful coat. It made me wonder how many of the little devils we would need to catch to make a nice coat.
We are up in a town called Napanee in Canada, near Kingston, so we can attest to them wandering up this far north at least.
Thanks again for an informative and entertaining post.

Creepy! Do they have beady little eyes under their dense fur??

My wife has been telling me for the past two nights that a mouse has been running around in her TV room/office. Yesterday she told me that it had committed the unforgiveable sin of chewing into an unopened chocolate bar, and that its time had come. So.last night I trapped it... a short-tailed shrew, identical to the one you show here. I live in Central New Hampshire, and there are two feet of snow on the ground. Guess he wanted to join the red squirrels, mice, and flying squirrels, and occasional mink and even once a ferret, that enjoy the woodstove's warmth in our 1800 farm house.

So glad I stumbled upon this hilarious but informative article! My backyard is absolutely covered by these little pricks all summer long!! They actually run over your foot if you are in the way!
I have picked them up on numerous occasions and now I find out that they are poisonous!! I will no longer be picking them up and moving them!!
The high pitch noise they make while running at 100 mph gives them away.
They also have no fear of me or my dog but, my chickens will attack and kill them as yummy snacks! Still have thousands so one or two chicken snacks will never make a dent!
Thank you so much for the info! My fingers and hands will now be safe from my stupidity and thinking they were cute and soft!!