On a bit of a blog tear here, as I leave for nearly two weeks in Costa Rica first thing Tuesday morning. Internet access is often iffy where we'll be, so hence the prolific - for me, anyway - posts. And please, do not feel too sorry for me, bailing on this subzero midwestern U.S. weather to spend time in lush tropical haunts in balmy temperatures with toucans, chlorophonias, sunbitterns, flowering plants, more butterflies than can be believed, etc., etc. Please, no crocodile tears for me.

Tom Ruggles of Muskingum County recently sent along a photo of a most unusual Northern Cardinal that has been visiting his feeders. It's yellow. Or at least strongly yellowish. Such a beast would certainly be eye-catching, and raise obvious questions.

Why is this normally brilliant red bird yellow? 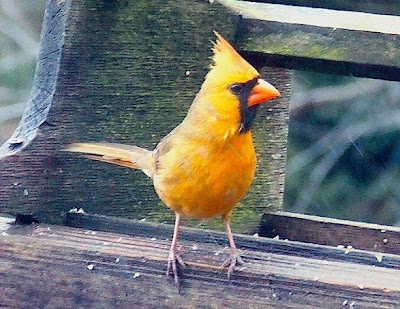 Tom's lutino cardinal. "Lutea" is latin for yellow, thus the term lutino. This cardinal is exhibiting a condition known as xanthochroism, a genetic anomaly that causes an excess of yellow pigments to show through. It may be caused by darker pigments being suppressed, thus permitting less dominant colorations to shine through.

If we are to get a bit propeller-headed here, the bright red plumage of Northern Cardinals is caused by at least nine different carotenoid pigments. Knock one or some of them out of whack, and we can end up with the bird in the photo or something similar. In my previous post, there is a (bad) photo of a heavily leucistic Red-tailed Hawk. That bird is displaying the effects of yet another genetic anomaly, but one that causes the individual to appear much whiter or paler than normal.

Carotenoids occur in plants and some animals, and birds uptake them as part of their natural diet. It's possible that xanthochroic individuals, like Tom's cardinal, result from dietary deficiencies. A well-known example of the role of carotenoids and bird coloration involves flamingos. If deprived of the blue-green algae and brine shrimp that are rich in beta carotenes that gives them their bright pink plumage, the birds become pale and whitish. By providing captive flamingos with a compound called canthaxanthin, the rich pink coloration can be restored.

Xanthochroism has been documented in a number of bird species, in addition to Northern Cardinals, including: House Finch, Cape May Warbler, Scarlet Tanager, and Red-bellied Woodpecker.

Thanks to Tom for sharing this interesting bird!
at January 18, 2009

You say Lutino, I say Latino...I always love your posts! Hoping next year I'll be able to participate in more activities such as the jaunt to The Wilds. And no crocodile tears thinking about us poor schloggers managing the cold!!!

Two weeks in Costa Rica...good for you...it will probably take that long for you to thaw out!
Interesting looking cardinal!

I have had plenty of House Finches that ranged into the orange end of the spectrum and even one that was yellow where his companions were red, but I have never seen a lutino cardinal. Now, that would be cool!

Have fun in CR! Maybe some year I will be able to make that trip.

A beautiful salmon pink male cardinal has recently appeared at my tube feeders. I first thought it was a female, but it is too big and brightly colored. It looks like a young bird, and I am interested to see if similar males appear over the next several months.

Maybe this cardinal has been demoted to prothonotary? (also yellow and named after an ecclesiastical personage..ohh the irony!)

We have one in our backyard!!! We live in Hamilton County Ohio (Loveland) and we have three different Cardinal families. One nest is in the shrubs and two other nests are in our back yard. We seen 3 broods this year. But the Yellow Cardinal has started to come to our feeder out back. I try to get a picture but I’m not fast enough. It’s one of the prettiest birds we seen this year!!