We have three regularly occurring "Bay Ducks"; divers in the genus Aythya. All are common, at least locally and seasonally, and are Redhead, Canvasback, Ring-necked Duck, Greater Scaup, and Lesser Scaup. Within the next few weeks, they'll be flooding through Ohio as ice-out takes place and they hurry northward.
Excepting the two scaup, males in this group are a snap to ID. Even the male scaup aren't ordinarily too bad, if decent looks can be had. Females can be a bit tougher, though. And again, the two scaup can cause some consternation. Thus, the following photo, which I've sliced and diced a few ways, is very instructive.
Nonda Surrat, who lives near Buckeye Lake and birds often near that reservoir, sent me this amazing photo. 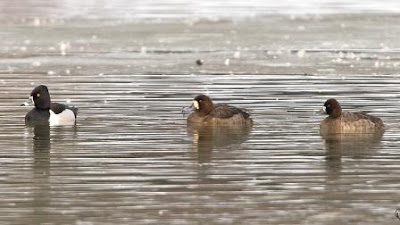 Nonda took this shot recently at Hebron Fish Hatchery. It is, from left to right, a drake Ring-necked Duck, a hen Greater Scaup, and a hen Lesser Scaup. Arranged perfectly in a row; quite remarkable! We'll go in for a closer look. 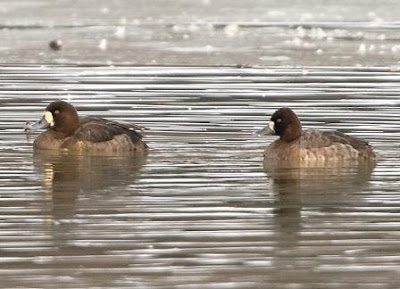 Cropped in tight on the two scaup. Several features become apparent that are useful for separating the two species. Some field marks are really good; others are variable but can serve to draw ones attention to a possible Greater - or Lesser - from afar. Notice the larger amount of white around the base of the bill of the Greater on the left. And its darker mantle (back) color, which creates a better defined demarcation between the back and sides than is present in the Lesser. Neither of these characters is absolute, though, and can vary amongst individuals and probably because of age as well. Quite helpfully, the birds are in almost exactly the same position in regards to the camera. The greater bulk of the Greater is evident, especially in the head and neck. It apppears bull-necked by comparison. Greaters average about 10-15 percent larger than Lessers. According to Sibley, average weight for a Greater Scaup is 2.3 pounds; Lesser is 1.8 pounds. Here's a tight crop on the Greater Scaup. Now we can see some of the structural traits which are reliable separators of the two species and not, at least normally, subject to much variability. Of course, the wing stripe is useful in telling the two apart but since we can't see that field mark here, we won't worry about it. Note how this bird has a nicely rounded head with little in the way of an obvious peak. If anything, the most obvious angle in the shape of the head is in front of the eye, after the forehead slopes rather steeply up from the bill.

Also note the comparatively massive bill. Big and broad, and appearing thick from top to bottom. It also has a more prominent nail, or hooked tip to the bill. This nail is also blackish, and the dark pigment bleeds onto the adjacent bill, making the entire tip of the bill look dark. 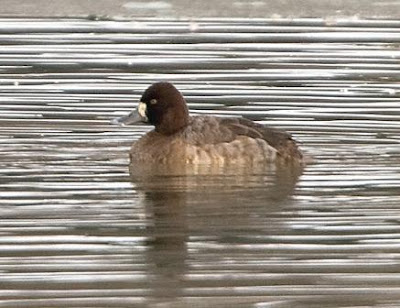 Here's a closeup of the comparatively wimpy looking Lesser Scaup. The bulbous head is perched on a rather spindly looking neck, and the shape of the head is distinctly crowned or peaked towards the rear. This essentially gives the look of a tall, domed head while the Greater is low and rounded. The bill is smaller and weaker by comparison, lacking the large, spatulate proportions of the Greater. Note especially the basal portion of the bill on each species - the area where the bill meets the head. It also has a smaller nail at the tip with little in the way of dark pigment, so in this photo it is hard to discern any coloration at the bill tip, while in the above Greater shot it can easily be seen.

That's enough of scaup, I think. If only we could see them this well every time in the field! Thanks to Nonda for sharing this great photograph.