A pair of dashing cardinals, and Albert the white-headed jay, in snow

Yesterday dawned cold and snowy. It was one of very few snowfalls in central Ohio this winter, and perhaps the best to date. I was stuck at home, working on a book project, but what is life without birds and photography? So, as soon as it was light enough, I took some snaps while the snow still clung to the branches. Albert, the gorgeous white-headed blue jay, was my main quarry but lots of other subjects presented themselves, including these cardinals. 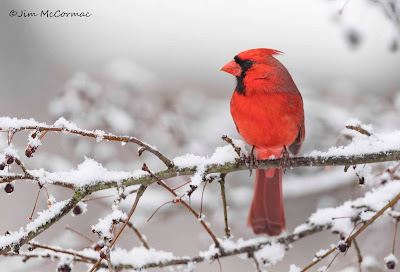 A male northern cardinal glows from a snowy branch. Cardinals are one of the showiest North American birds, and look dazzling anywhere, anytime. But there's nothing that makes the males pop like a fresh coat of snow.

Because this is such a common songbird, it's possible to become jaded to cardinals. Never let that happen. It hardly seems possible that such a gorgeous, exotic-looking animal could be in our midst. 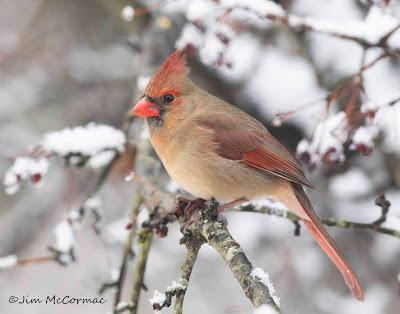 Here's the crimson fellow's mate. She looks fabulous too. Just in a more understated way. The lengthening days have stimulated cardinals to increase their singing. It's a beautiful whistled song often described as "cheery". And that it is. If you have the time to look, it's always worth glancing around to locate the singer. I constantly do this, with all singing birds, as it's a great way to keep honing your ability to rapidly find birds. But there's another possible reward for finding singing cardinals. It might be the female that is singing! They don't sing as often as males, but when they do it's every bit as melodic and artful as the male. 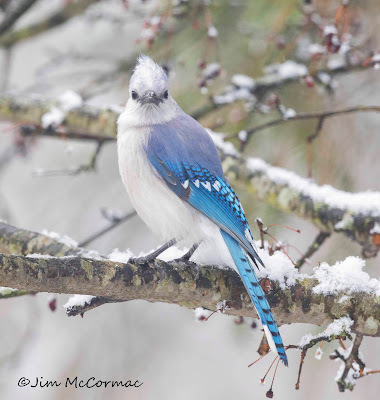 And here he is, Albert, "my" amazing blue jay! He's looking at me as if to say, "what have you done!", in reference to the snow. As he was born last year, this is his (I don't really know if it's a him or her, but with a name like Albert, I'll go with him :-)) first winter. And first exposures to snow.

Albert remains a fixture, bombarding the feeders for unshelled peanuts and other seed every day, especially in the morning. The morning that I made this image, I replenished the feeders shortly after daybreak, and Albert was out there berating me for moving too slowly. He's quite bold, as jays are, and freely speaks his mind. I have been pleased to see that he does not allow the "normie" jays to push him about.

This special white-headed jay has been here for over a month now, and it'll be interesting to see how long he remains.

Not so much as a comment but a question. I have a number of cardinals at my backyard feeder. I`ve noticed, almost daily, a neon orange/red "cardinal". Can you tell me anything about this? I saw your article about a strange change in BlueBirds or Jays a couple of weeks ago and I can`t find the article. Thank you.

I bet that’s a cool bird! Various carotenoids cause cardinals’ bright colors, and perhaps that bird has gotten into a food source rich in orange-inducing ones!