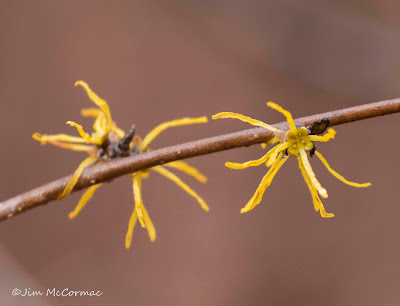 Fall’s native flora disappeared months ago. The last of autumn’s flowers gave up the ghost by early November or so. Colorful asters, beautiful gentians, the last of the sunflowers — spent and returned to the soil, ushering in winter’s long, brown season of wither.

For people of a botanical bent, winter is a tough time of floristic withdrawal. Those who ride out our coldest season at northerly latitudes face many months of botanical barrenness. It will be late February before the emergence of skunk-cabbage heralds the onset of spring wildflowers.

Fortunately, a hardy fall-and-winter-blooming shrub snaps the long flowerless streak. Witch hazel (Hamamelis virginiana) begins blooming in mid-October but reaches peak flowering in late November in many areas. The showy shrubs often will produce flowers through December and even into early January.

Witch hazel is a woodland understory plant, overshadowed by taller woody brethren such as beech, maple and oak. In our region, its favored haunts are the rich soils of stream terraces and adjacent lower slopes. Multiple spindly trunks spring from a common point, giving the plants a bushy aspect. A tall specimen might reach 20 feet, thus attaining small-tree status.

Leafed-out plants are easy to overlook in the shade of the forest understory. Witch hazel is even easier to miss when it loses its leaves and blends with other leafless companion trees and shrubs. Until it flowers.

Seeing a witch hazel blooming profusely in December can cause a first-time observer to shake his head in disbelief. From afar, the plant appears to glimmer with scattered pale-yellow stars. Upon inspection, the flower proves to be an ornate artwork. The skinny, elongate petals appear to be crafted from confetti, and spring from a four-part lemony-brown calyx.

Once one has tuned in to the curious flowers of witch hazel, they often will soon notice other plants. Favored stream corridors can be lined with rows of heavily blooming plants, at a season when the admiring botanist likely is wearing a heavy coat.

Why would a plant flower in winter, especially one whose pollination demands insect assistance? As we all know — and many are grateful for — insect diversity and abundance plummets in winter.

But insects don’t completely vanish in the cold season, and temperatures higher than 40 degrees can bring out an assortment of tiny flies, and bees and wasps. Bugs in these groups probably are major pollinators of witch hazel, with certain beetles also contributing.

A small suite of moths also plays a role in witch-hazel pollination. Certain owlet moths are incredibly hardy, and sometimes referred to as “winter moths.” By shivering frenetically, these moths can increase their body temperature at least 50 degrees. They can take flight even on cold winter evenings. As these moths ply their trade under cover of darkness, the extent of their witch-hazel association is poorly understood.

Gardeners might note that their witch hazel blooms in early spring. Those plants are a southern species, Hamamelis vernalis (vernalis means “of spring”). It, or cultivars thereof, are commonly sold in nurseries.