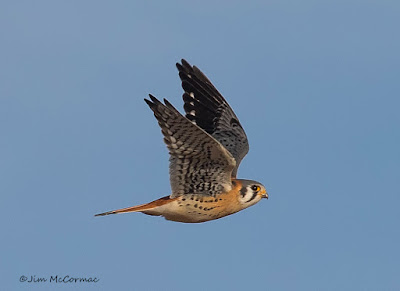 A male American kestrel wings by, having been flushed from a roadside wire by a passing vehicle. I was ready for him. Big Island Wildlife Area, Marion County, Ohio.

This is Bird Behavior 101, but what the heck, I'll throw it out anyway. When I made this shot, I was far out in a field of tall prairie grasses interspersed with openings of sparser growth. Armed with my easily handholdable Canon 5D IV mated to Canon's brilliant 100-400 II lens, I was stalking sparrows. I had noticed the distant kestrel on the wire, but it was far out of range so I was just keeping a casual check on it from time to time.

The road that it was perched along is very sparsely traveled, and I remained on alert for the next vehicle. Eventually I saw a pickup truck coming along way down the road, and turned my full attention to the kestrel. These little falcons tend to be wary, and passing vehicles nearly always flush them from roadside wires, at least on small slow speed roads such as this one.

I tucked myself into a convenient clump of head-high switch grass that did a good job of masking me. My bet was that the flushed kestrel would wing right by my position. The opposite side of the road was barren plowed field, and I knew the bird was more likely to head to a new spot on the wire by traveling over prime hunting ground than over a lifeless agricultural field. I also didn't think he would head north and away from me, as a short distance in that direction is railroad tracks and a broad state highway, forming a barrier of sorts at least in regards to good hunting habitat. It would be easier for the little raptor to shift a short distance to a new spot in his current prairie patch.

So I was poised and ready, the truck sure enough flushed the kestrel, and as I hoped it flew out over my field and fairly near my position. I got a series of shots, the falcon returned to the wire to continue hunting rodents, and I returned to trying to drum up some Savannah sparrows. 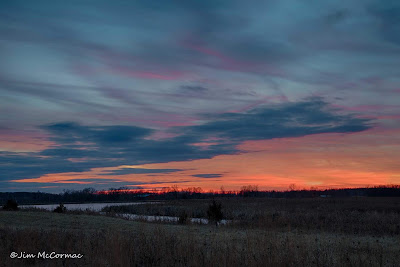 Later I ran into Ken Busch, who is one of Ohio's standout natural history photographers, especially anything involving birds. Check his website out RIGHT HERE. We set up our big camera rigs along the edge of what often is a prime short-eared owl hunting meadow, crossed our fingers and hoped some owls would commence hunting before it got too dark to work with them. Alas, it was not to be on this night, but we had a good time talking photography.

After Ken left, I walked around the prairie a bit, taking in the sounds of various waterfowl calling as they headed to roosts, the day's finale of various songbird calls, and the raspy trills of western chorus frogs, roused from their slumber by unseasonable 50+ F temperatures.

A glance westward made me rush towards the Jeep, as I saw an explosion of color quickly taking shape on the western horizon. I shot down the road towards a better vantage point, flipped lenses around and got everything mounted on the tripod. For a brief while, the sky danced with hues of red, orange, blue, purple and yellow. In my opinion, one can never savor too many sunsets (or sunrises). And sunsets and sunrises nearly always look better over a prairie.

PHOTOGRAPHIC NOTE: One might think it would be best to use the widest angle lens available to shoot sunrise/sets. Generally that's not the case. With really wide perspectives, such as 16mm (my widest lens is a 16-35mm), the colorful hotspots tend to get lost in the overall vast landscape. I prefer to zoom in tighter on the core color to really emphasis it. My go-to lens is a 70-200mm, and it's superb for these sort of shots. I usually use it at or near the 70mm end. However, I recently obtained Canon's versatile 24-105mm f/4 II lens and it is quickly becoming a workhorse. This shot was made with that lens, at 55mm. I started shooting this sunset with my 70-200, but the expanse of the color along the horizon was such that I wanted a bit wider perspective. The new lens fit the bill perfectly. 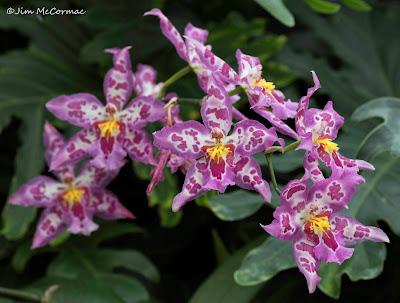