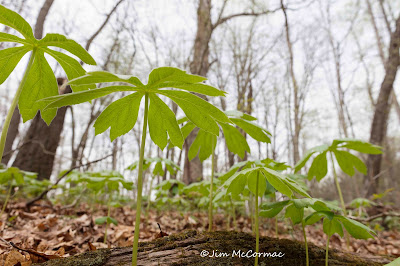 A colony of mayapple, Podophyllum peltatum, in an Ohio woodland in mid-April. This common wildflower is easily distinguished, in flower or not, by its distinctive deeply cleft umbrella-like leaves. A patch such as in this photo is likely a clone. The plant quite successfully spreads by rhizomes, forming extensive colonies. 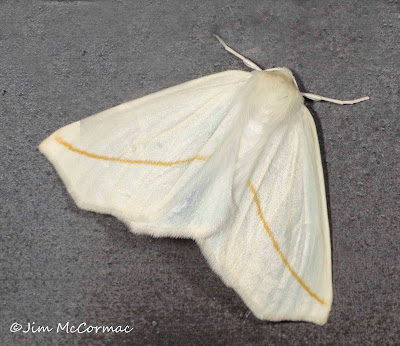 When at rest on a wall near a nightlight, this moth cannot be missed. Its ivory coloration makes it stick out like a sore thumb. The white slantline, Tetracis cachexiata, derives its name from its pair of conspicuous orangish-yellow lines that adorn the wings. A common enough species, the caterpillars of white slantline feed on a wide variety of woody plants common to eastern forests. The adult moth has an interesting relationship with mayapple flowers. 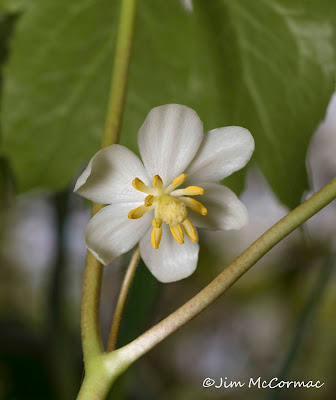 Come May, the curious waxy-white flowers of mayapple open. They're held on an elongate pedicel below the overarching leaves, and although of notable size, can be missed due to the leafy canopy that overarches them.

Mayapple flowers do not produce nectar, and savvy pollinators apparently quickly catch on that no rewards are to be reaped by visits. It has been shown that mayapples that grow near or among a profusion of other spring wildflowers up their chances of pollinator visits. The other nectiferous flowers lure plenty of bees, beetles, wasps and other nectar-seeking insects, some of which are likely to investigate the mayapple flowers.

The white slantline moth also visits mayapple flowers, but without expectation of any reward other than a camouflaged environment. I first saw these moths roosting on mayapple flowers in May 2007 in southern Ohio, and have been looking for them on flowers ever since. No luck, until yesterday... 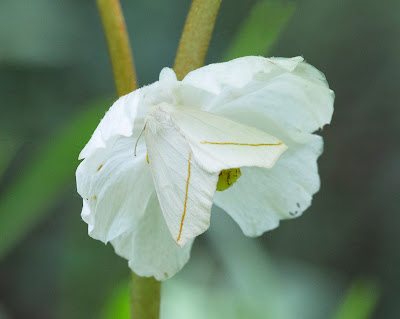 While hiking a trail in the Hocking Hills, I glanced over at a mayapple flower, and Voila! There it was, a beautiful white slantline tented around the stamens of a mayapple flower. I found three moths similarly situated, all in a small area. The mayapple flowers were mostly past, and that may have upped my chances as the moths' floral hiding spots were few and far between. I'm told white slantlines also roost on flowering dogwood, Cornus florida, flowers, but given the profusion of blossoms on one of these trees, finding a moth would be quite the needle-in-a-haystack search.

Selection of these flowers as a daytime hiding spot could largely be attributed to camouflage, but I have to wonder if the moths do provide some pollination services. It's reasonable to assume that some pollen might adhere to their fuzzy bodies, and could be transferred to other plants. Whatever the case, it is a very cool spectacle to encounter, and keep an eye on those mayapple flowers.

PHOTOGRAPHY NOTES: Shooting these moths was tough. Overcast skies, vigorous breezes, and deep woods conspired to reduce light tremendously and create movement of the subject. Flash would be an obvious solution, and I made a number of shots using artificial light. I wasn't particularly happy with any of the latter. While the flash-aided shots were sharp, and mostly blacked out the background, they created a harshness and sharp-edged look to the soft white subjects. Even muting the light's intensity to soft fill-flash levels didn't render much that I liked, but I should go revisit these and see what can be done. Anyway, the moth shot above was made with the Canon 5DSR and Canon's 180mm macro lens, with no flash, at f/11, 1/25, and ISO 1600 (way too high for my tastes). The rig was stabilized on a tripod and I shot in Live View so there was no mirror movement. I also used high speed burst, and when the plant would stop moving for a second I'd fire off a bunch of rounds. Some of the results were fairly sharp.

Wow! Mayapples are at the end of their bloom cycle up here in Michigan; we will certainly keep an eye out for this beautiful creature. What a great blog post - thank you!

I have a small patch of Mayapples. From now on I will be on the look out for this gorgeous moth.

Some years ago I saw these moths during the annual Wildflower Pilgrimage at the Arc of Appalachia Preserve System. A lecturer the night before had talked about these little guys, and on a hike the following day at the Gladys Riley preserve, a group of us found SEVERAL of them hiding in various Mayapple blossoms! The timing of our discovery made it seem that the moths were pretty common, but although I've looked for them ever since, I've never found them again. Pretty cool, though!