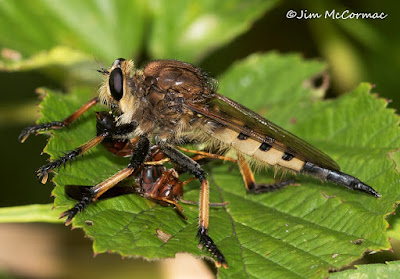 This is the summer of the cannibal flies. For people fascinated by the boundless diversity of insects, that’s a good thing. For subordinate bugs, the cannibal-fly bonanza is very bad.

Cannibal fly is a colloquialism applied to robber flies in the genus Promachus. They’re big, beefy insects, and you won’t miss one if it comes near. The name stems from their decidedly uncivil habit of occasionally eating fellow robber flies.

These robber flies are entomological warriors. It’s a good thing they aren’t the size of eagles, or we humans would have great reason to fear the outdoors. Fortunately, the biggest cannibal flies measure only 1 1/2 inches, but that’s still a big bug.

Although there are 22 species in the U.S., only two are regularly encountered in Ohio.

To most people, a cannibal fly would look quite creepy. Huge eyes gaze inscrutably at the world; limpid inky pools delivering a death gaze. The thorax is monstrous, swollen as if it’s housing a supercharger. In a way, it is — powerful flight muscles are contained within. Extending aft is the saberlike abdomen, appropriately tiger-striped.

Long wings provide for strong flight, and stout banded legs beset with stiff spines prop the beast up. The fly’s face is heavily bearded, and jutting through the facial hair is its stiff syringe-like proboscis.

A hunting cannibal fly sits atop a leaf or other prominent perch, awaiting passage of a potential victim. When a prospect flies by, the fly scrambles into the air with a sonorous buzzing sound. The effect is that of a six-legged Sikorski Skycrane helicopter lumbering aloft.

The fly rapidly closes on its victim and grabs it in midair, enfolding the hapless bug in an Iron Maiden death grasp with its spiny legs. It then delivers the coup de grace — a fatal stab with the proboscis.

Still struggling, the doomed prey is flown to a nearby perch. The proboscis delivers a potent neurotoxin which quickly sedates the victim. Other chemicals work to quickly liquefy the innards, reducing them to an easily digested slushiness. The robber fly then sucks the contents out through the same proboscis that dealt the death blow.

Another name for cannibal flies is “bee killer.” Even painful stinging insects have no protection from these ferocious flies, and they routinely grab the largest bumblebees. The fly in the accompanying photo has a paper wasp in its grasp, and anyone who has been stung by one knows how painful these wasps can be.

Most years, cannibal flies are not plentiful. I might see a handful each summer in my wanderings. This year, I’ve probably seen more than in the past five years combined. Others have reported lots of them, and social media has been peppered with photos.

What sparked the spike? I don’t know for sure, but weather and moisture conditions must have allowed for excellent survivorship. The larvae live in the soil, eating insects and vegetation. Obviously, large numbers survived to adulthood.

Cannibal flies occupy the upper echelon of insect predators. They are the peregrine falcons of the fly world. Their presence indicates a healthy ecosystem with a well-developed food chain.