A cooperative Eastern Screech-Owl (with comments on low-light photography) 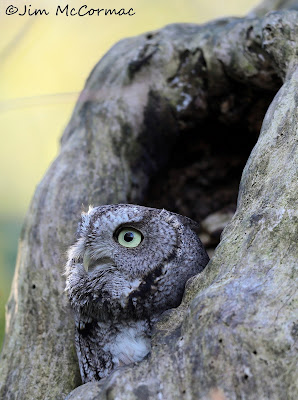 An Eastern Screech-Owl peers from its roosting hole - a cavity in a gnarled box-elder. I made this image and those that follow yesterday at a local park. James Muller, a sharp birder and regular at this place, was making the rounds the other day when he heard agitated chickadees and other songbirds mobbing something. Astutely, he sought out the source of their angst and found the owl.

Screech-owls tend towards the tame, but this one takes the cake. It could care less about people watching and photographing from the trail, which is only about 25 feet or so away. As we represent neither food nor foe, the owl would rarely even cast a glance our way. Fortunately, the owl has been spending a fair bit of time sitting at the cavity entrance during the day, allowing its admirers to fawn over it.

I saw an opportunity to make some images of one of my favorite species, and headed over as soon as time permitted. Making nice clean images of the owl was not totally straightforward though, due to very dim (shaded) light conditions. There are some ways to combat low light, and I'll share them at the end of the post. Make note of the camera settings under each photo. All of them were made with the Canon 5D IV mounted on a Gitzo tripod, with the Canon 500mm f/4II lens, and all but the first image with the Canon 1.4x teleconverter (making for a 700mm lens). 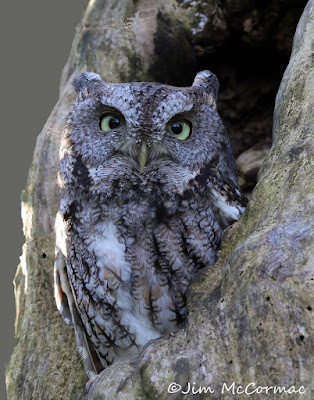 One of the rare times the owl deigned to look into the camera, showing us its slightly cross-eyed look. 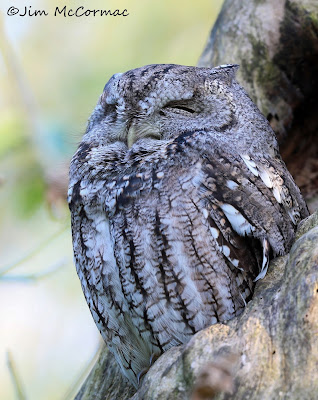 The little owl dozes, apparently enjoying the warmth of a sunny day and the few rays that penetrate his wooded locale. His mini-siestas seldom lasted long, as marauding Carolina Chickadees or vultures passing over would often grab the owl's attention. 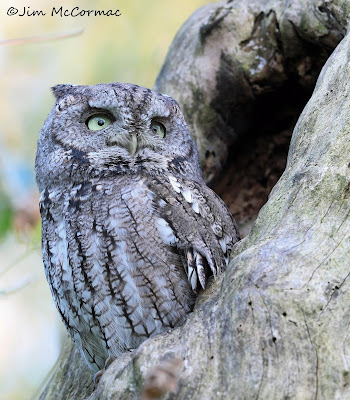 Chickadee alert! The owl snaps his attention towards the annoying chickadees that routinely stopped by to loudly scold him. They would often approach within a few feet, and when the owl was down in his hole, would alight on the edge of the cavity and shout chickadee expletives into his lair. While small rodents such as mice often form a staple of a screech-owl's diet, they will certainly bag small songbirds if chance permits, hence the chickadees' dislike of the predator. 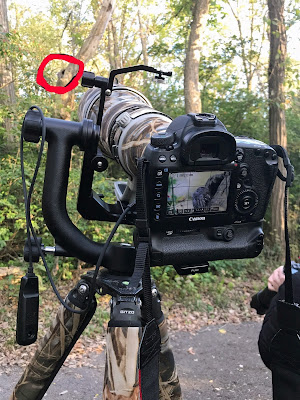 This is the camera rig set up on the owl's cavity, which is circled in red. The path made a nice operating surface that was far enough away to avoid any bother to the owl. As previously noted, the major problem was poor light. One way around that would be to use flash, but I won't do that with an owl and I don't think anyone should. The bright pulses of light would almost certainly annoy the owl, and likely send it back in the hole, or possibly even flush it. Even if not, photographers sending Better Beamer-boosted flash onto the bird would most certainly annoy other people who are admiring the bird, and thus create unnecessary conflict.

So, what to do? In such situations, ISO drives much of my decisions regarding camera settings. Although cameras are getting increasingly better at processing higher ISO settings, lower ones are always better. The higher the ISO, the grainier (noisier) the image becomes. The lower the ISO, the cleaner and more noise-free the image. Thus, the lower the ISO, the better the image. ISO is the digital equivalent of film speed from the olden days. Back then you would use 100 film speed for bright conditions, which would yield the cleanest images. 400 or 800 and up speed film for darker conditions, but with the trade-off being grainier images.

With my first image - which was one of the first that I made of the owl - I had the 500mm lens wide open at f/4, at which it harvests the most light. This allowed a fairly fast shutter speed of 1/100, with the ISO only reaching 400. The 5D IV handles higher ISO's pretty well, but I really dislike shooting at anything over ISO 800, and do my best to go lower than that. My issue here was that I really wanted to shut the aperture down to provide better depth of field as well as some increased sharpness, but that reduces the light that enters the camera even further. Also, after the first round of images, I decided I wanted to put on the 1.4x teleconverter to increase the focal length of the lens to 700mm. By doing that, the aperture goes to a minimum of f/5.6.

Fortunately, owls may as well be feathered rocks when they're roosting. They do move, but more often they just sit stock still, so shutter speed becomes less of an issue. So, with the camera rig firmly mounted on the tripod, I had a stable working platform. I then used "live view" which displays the scene on the screen on the back of the camera. In this mode, the internal mirror is locked up, which prevents even the faint shudder caused by the mirror's movement when the shutter is tripped. To further reduce any possibility of camera movement, I had a remote shutter release plugged into the camera. You can see that hanging off the tripod in the photo above. With this setup, the camera remains absolutely motionless when I trigger it, allowing me to use insanely slow shutter speeds caused by a small aperture of f/9 and very low ISO settings. As long as the owl did not move during the exposure, the slow shutter speed doesn't matter, and I get far cleaner images than if I shot at fast shutter speeds that would have required ISO settings that probably would have had to range to 3200 or even well above. 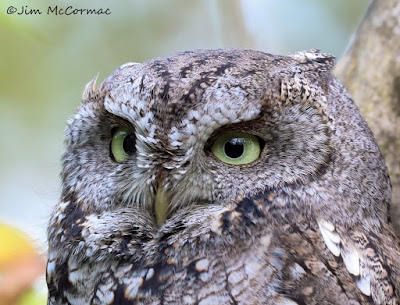 As the day's end approached and light worsened, my ISO had to increase to maintain the same settings. This is one of the last photos that I made, near twilight. The ISO hit 1000, and that's about as high as I want to go with that if at all possible. The image, even with this tight crop, still looks pretty clean and sharp (and I greatly compress the images posted on this blog). And that's at one-sixth of a second!

While the techniques described here are well known to landscape photographers, they can be applied to birds and other animals, as long as they remain motionless long enough for the exposure to be made.

Gorgeous photos of the eastern screech-owl! We noted an eastern screech owl last year in one of our boxes. I can only hope to spot the owl again this year and take photos like yours.