A mishmash of flora and fauna from recent days

I've been away far more than home of late, much of it up in Ashtabula County - the largest and most northeastern of Ohio's 88 counties. From my home in Columbus, the center of the state, it takes nearly three hours to get there. It's like another world, and harbors perhaps the greatest concentration of wetlands in the state.

Thus, Ashtabula County was a great place to hold the Ohio Odonata Society's annual meeting, which is why I was there. The hub of the get-together was in Morgan Swamp, at the Ohio Chapter of The Nature Conservancy's Grand River Conservation Campus. There, we heard a number of great talks, and on Saturday radiated out to surrounding areas for field trips. The one that I was on visited Holden Arboretum in adjacent Lake County. Following are some photos from that excursion, and other forays in the area. 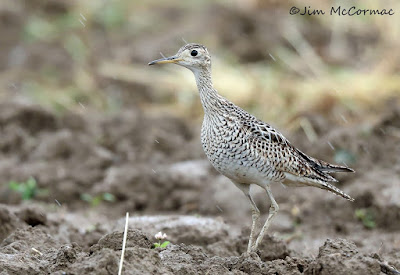 An Upland Sandpiper, Bartramia longicauda, forages in a light rain. It was one of two adults, who were tending two fully-grown offspring. The adults were conspicuous, frequently giving their ethereal wolf whistle calls, and alighting atop telephone poles. This beautiful sandpiper has declined tremendously in Ohio and is now listed as state-endangered. 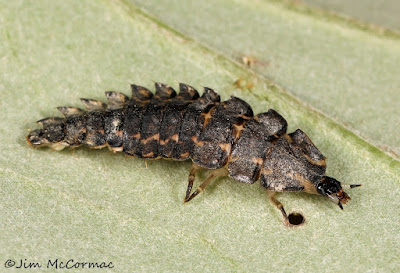 A "glow worm", or the larva of a firefly (genus Photurus). The wet woods of Morgan Swamp are thick with fireflies, and I spent some time Saturday night with Laura Hughes and Dan Hodges checking them out. Laura knows tons about this poorly known group, and showed us a gathering of one of the "synchronous" fireflies in the genus Photinus. The larval glow worms produce luminescence just as do the more conspicuous flighted adults. These dragonlike predators are ground-dwellers - watch for them in damp areas. 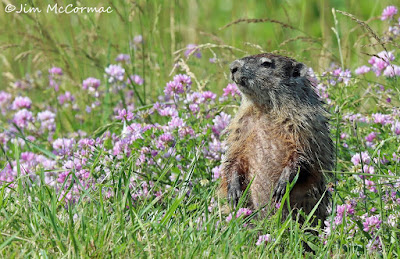 A Groundgog, Marmota monax, one of our more charismatic mammals. This one surveys his realm from a patch of crown vetch. Often derided as a "varmint" (you can be pretty well sure that anyone using that word is low in ecological literacy), these native ground squirrels are keystone species. Their large burrows are used by many other species, including foxes. 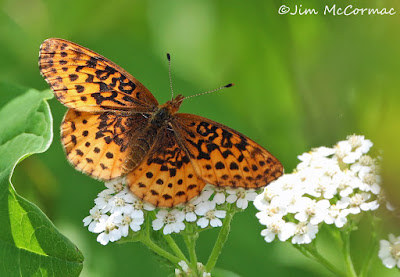 Small but stunning, a Meadow Fritillary, Boloria bellona, nectars on yarrow. We saw many of these butterflies. 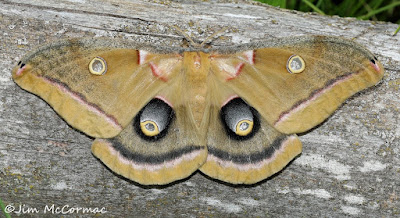 It was a treat to encounter the huge and spectacular Polyphemus Moth, Antheraea polyphemus. This is a female, nicely displaying her eye spots. If a songbird were to notice and poke at the moth, it would instantly snap open its wings, displaying the "scary" eyes and thus likely spooking off the potential predator. 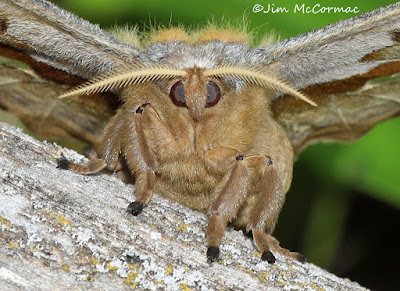 A portraiture shot of the same moth. The Polyphemus is one of the giant silkmoths. Members of this group are in essence flying gonads: they have no functional mouthparts, do not feed, and only live for a week or so. Their primary duty is to find a member of the opposite sex, mate, and reproduce themselves. 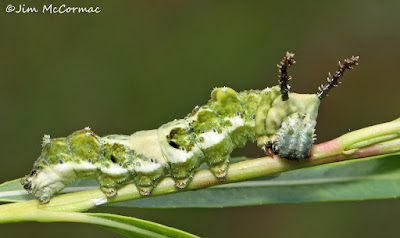 An interesting caterpillar to be sure, that of the Viceroy butterfly, Limenitis archippus. This one was feeding on sandbar willow, Salix exigua, a common host plant. The cat is an excellent bird dropping mimic, but not as good as a caterpillar to follow. 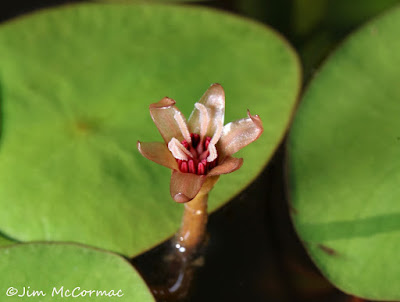 The tiny mauve flower of Water-shield, Brasenia schreberi, juts from the water. This small water-lily is our only native member (in Ohio) of the Cabombaceae family. The undersides of the leaves are coated in a viscous jelly, and quite gooey to the touch. 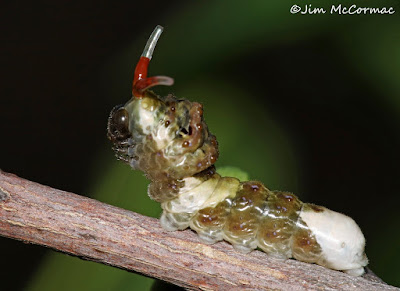 A Giant Swallowtail butterfly caterpillar, Papilio cresphontes. This is probably the best of our caterpillar bird dropping mimics, and it looks quite unpalatable indeed. I tapped him just before making the photo, causing the animal to rear up and display its osmeterium, or "horns". Those horns produced foul-smelling chemicals, and the "chemical switchblades" are used to try and ward off would-be predators. This one and several others were feeding on prickly-ash, Zanthoxylum americanum, one of only two Ohio natives in the citrus family. These plants were recently installed at Holden Arboretum, and are already producing swallowtails. Plant it, and they will come. 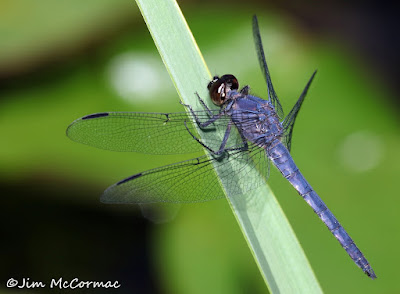 Finally, some dragonflies! This striking blueberry-colored specimen is a Slaty Skimmer, Libellula incesta, one of many that we saw at Holden Arboretum. 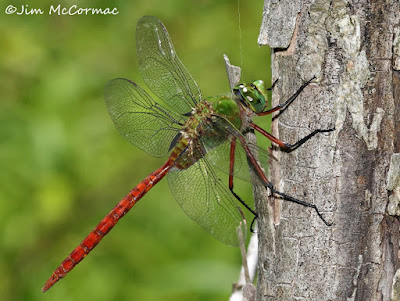 A huge Comet Darner, Anax longipes, in a rare moment of repose. Holden Arboretum's longtime director of special projects, botanist, and overall natural history expert Brian Parsons was leading us around a dragonfly-filled pond at Holden when we spotted two of these dragons. For a while, they aerially hunted and chased one another, sometimes right through the group. Finally, in a rare stroke of luck one of the comets landed on a nearby tree, allowing close inspection and photo ops for all. 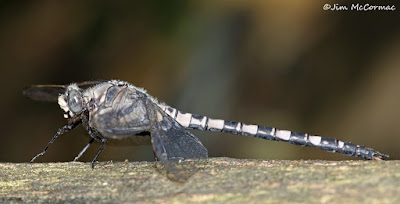 One of the rarer species we found at Holden was this Gray Petaltail, Tachopteryx thoreyi. These massive, primitive dragons are associated with permanent seepages, often in heavily forested areas. The petaltail is an extrovert and as is often the case, allowed me to get as close as I wanted with my camera. At one point it even landed on the shoulder of one of our group members, and better yet, briefly alighted on the net of odonatologist Bob Glotzhober!

I'm going to write more about dragonflies later. This year marks the inaugural year of the three year Ohio Dragonfly Survey, a collaboration between the Ohio Odonata Society and the Ohio Division of Wildlife. It's structured much like a breeding bird survey, and the end game is to document an accurate picture of all of Ohio's odonata (dragonflies and damselflies). Everyone is welcome to help, no matter your level of skill. Read more about the survey RIGHT HERE. Also, consider joining the Ohio Odonata Society. Can't beat the price - dues are only $5.00 a year! Details RIGHT HERE.