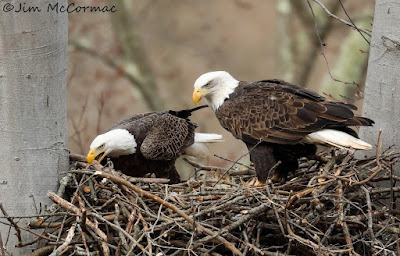 Bald eagles build a nest in eastern Ohio. There are now more than 200 nests known in the state.

On June 20, 1782, the bald eagle was formally adopted as the symbol of the fledgling United States of America.

Contrary to myth, one of the committeemen involved in the decision, Benjamin Franklin, probably never protested the choice in favor of the wild turkey. However, in a missive to his daughter two years later, he did lament the bird as being of "bad moral character."

Franklin's sniping aside, the mascot was a good pick. Eagles have long represented power, nobility and freedom.

In the early days of the Congress of the Confederation, bald eagles flourished. The huge raptors would have been a familiar sight to most Americans.

By the turn of the 20th century, 100,000 pairs of nesting eagles were estimated to inhabit the U.S. Serious threats would soon loom, though.

Indiscriminate shooting and loss of habitat began to take their toll. The eagle population declined. An alarmed Congress enacted the Bald Eagle Protection Act in 1940 to help protect our national avian emblem.

A new, insidious threat would soon wreak havoc on America's eagles. A highly toxic pesticide, DDT, was introduced after World War II, and its use quickly became widespread.

DDT seeped into the ecological web and had terrible effects on predators that ate tainted prey. It caused severe thinning of eggshells, leading to a collapse in reproduction. By the 1960s, eagle populations were in a tailspin.

Richard Nixon squeaked into the office of the president of the United States through the election of 1968. Public outrage over environmental degradation was nearing its zenith, and Nixon noticed.

In 1970, Nixon formed the Environmental Protection Agency, and one of its major issues was a ban on DDT. Finally, its hand somewhat forced by environmentalists, the EPA banned DDT in 1972.
The following year, 1973, saw the enactment of the Endangered Species Act, which ramped up protections for imperiled organisms.

These measures were just in time. By 1979, Ohio's bald-eagle population was down to four nesting pairs. The situation was similarly dire in much of the continental U.S.

As DDT gradually was purged from the environment, and other protective strategies bore fruit, eagle populations began to rise. In 2007, the federal government delisted the formerly endangered bald eagle. From a low of 417 nests in the lower 48 states in 1963, eagles had rebounded to nearly 10,000 pairs by the time of delisting.

Today, there are over 200 nests in Ohio, and new aeries turn up each year. At least one nest is in view of Downtown's skyscrapers. Winter eagle concentrations can be almost Alaskan in impressiveness. Recent congregations at Old Woman Creek National Estuarine Research Reserve on Lake Erie have numbered nearly 50 birds.

There has been much recent talk of neutering the EPA and dismantling many environmental protections. I hope that decisionmakers recall our relatively recent dirty history of pollution and toxicity, and are aware of how those problems were fixed.

A healthy environment is not only good for eagles, it's also good for us.

Naturalist Jim McCormac writes a column for The Dispatch on the first, third and fifth Sundays of the month. He also writes about nature at www.jimmccormac.blogspot.com

Ditto to those final comments. Don't see them often, but there is a pair we see occasionally.