I journeyed to one of my favorite Lake Erie haunts today, the city of Huron, in Erie County. The lakefront here features the mouth of the Huron River, and it is nearly always birdy. Even today, when the lake was placid, the skies were mostly blue, and winds were calm. Bad weather makes good birding, along Lake Erie.

After spending an hour or so at the far end of the municipal pier without seeing much in the way of avian diversity, I started the long plod back to the mainland. As I did, I began to hear the calls of Snow Buntings passing overhead. As nearby Nickel Plate Beach is often a good bunting locale, I figured some of the birds might have put down there, so it was off to the beach. 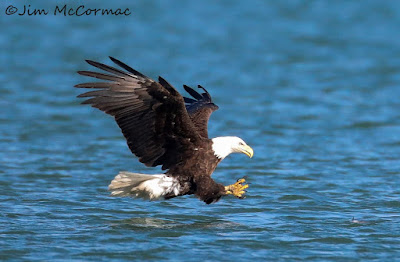 An adult Bald Eagle prepares to snatch a fish from the waters of Lake Erie. As always, click the photo to enlarge, and you'll see the victim swimming in the bottom right hand corner of the image. A millisecond after this photo was made, the eagle snatched the scaly treat.

All morning, Bald Eagles had been soaring about, occasionally putting up clouds of resting gulls. Both adults and juvenile eagles were around, and rarely was one not in sight. As I was stalking the sands of Nickel Plate Beach seeking buntings, I noticed an adult eagle coming near the beach. Just as I glanced over at it, the bird made a sudden careening dive for the surface, but missed the fish. Figuring he/she would try again, I got ready, and sure enough, in came the bird and this time it was not to be deprived its fish. 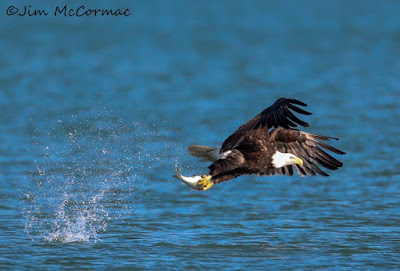 This image was two shots after the one above, and my camera's burst rate is about seven shots a second. The fish never knew what hit it.

Bald Eagles sometimes get a rap for being vulturelike and frequently noshing on carrion and other easy - dead - pickings. But they are highly adept fishermen, and I've seen scenes like this play out many times. I'm just not usually fortunate enough to be able to capture them with my camera.

Great shots...and hard to do. Splendid!