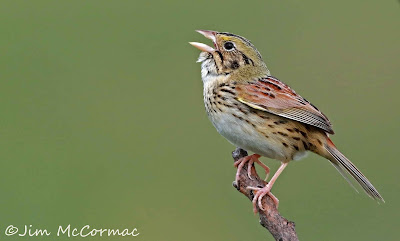 A Henslow's Sparrow bursts forth with its 3/5th's of a second insectlike hiccup. This declining species is a charismatic grassland bird, and one that is much sought by birders.

On the weekend of June 17 & 18, the inimitable Ohio Ornithological Society is hosting a grassland bird workshop. Complete details RIGHT HERE. This is a perfect time for such an affair. The birds will be active and singing, the weather should be great, and participants are certain to see lots of avian diversity. Oh, never be put off by the "OOS's" rather distinguished name - it is a very user-friendly bird club that welcomes all skill levels to its ranks. 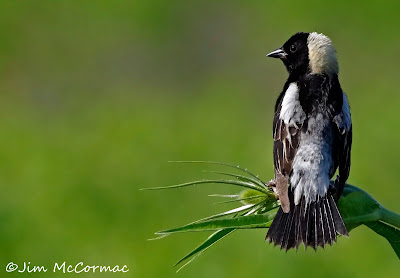 A charming blackbird if there ever was one, the Bobolink. Even William Cullen Bryant was so moved by the effusive gurglings of this species that he comemmorated it in a poem, Robert of Lincoln.

Our venue for field trips is the Wilds, a vast southeastern Ohio grassland that hosts more Bobolinks than one can shake a stick at. I've been there, at times and places, when their collective R2-D2 squeaks nearly drowned out lesser singers, such as the aforementioned Henslow's Sparrow. 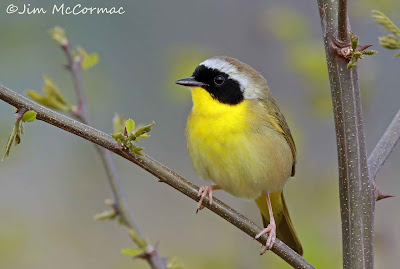 A Common Yellowthroat, the masked Zorro of the warbler world. While not strictly a grassland bird, yellowthroats and many other species occupy wetlands and shrubby copses interspersed with grasslands. The Wilds supports a great many bird species, and this is one we're sure to see.

Festivities begin Friday night, with your narrator giving a program on grassland birds and their status in Ohio. The following morning, it's off to the field to see the real deal. A cookout should make for a fun lunch, then its back out for more birds. 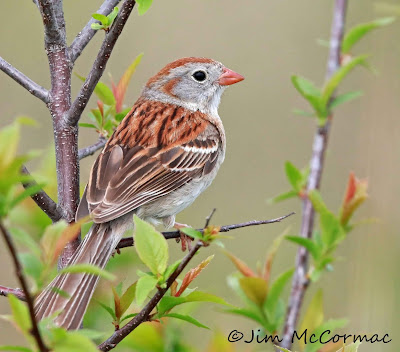 Sparrows, like this Field Sparrow, may be subtle but they're stunning upon close inspection. We should have ample opportunity to not only bone up on visual identifications, but also practice our birding by ear.

I hope you can make it, and if so, I'll look forward to sharing time afield. Again, all the details and registration info are RIGHT HERE.