Prairie-chickens, once common in Ohio, have been gone for a century 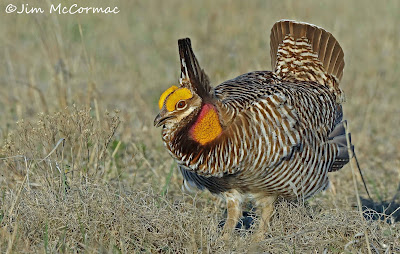 About 50,000 people lived in Ohio in 1803, the year it became a state. They were greatly outnumbered by prairie chickens.

Two centuries ago, Ohio was far wilder than it is today. Most of the state was forested, but interspersed were vast prairies — about 1,500 square miles at the time of settlement.

Prairie regions blanketed vast swaths west of Columbus, south of Circleville, and in the Marion area. Noteworthy was the Oak Openings, a 300-square-mile mosaic of savannas and sandy prairie west of Toledo.

The prairies were exceptionally diverse in both flora and fauna. A standout among the prairie denizens was the greater prairie chicken.

Prairie chickens are related to wild turkeys and ruffed grouse, but they shun the forests preferred by those species. The treeless oceans of grasses and myriad sun-loving prairie plants are where the chickens roamed.

No one knows how many prairie chickens occupied Ohio in the early days. Vague settler accounts from the early 1800s cite “thousands” of prairie chickens in the larger prairies. They were undoubtedly a large part of Ohio’s prairie ecosystem.

The prairies would never be the same. Deere’s device gave settlers a tool to cut thick prairie sod, and almost overnight, Ohio’s rich prairie was transformed into seas of crops.

Bolstered by agricultural and industrial advances, Ohio’s population passed 4 million people by 1900. Not coincidentally, that’s about when prairie chickens vanished from the state, unable to compete with the onrushing tide of humans.

I recently traveled to central Kansas to see and photograph prairie chickens, courtesy of Jackie Augustine of Ohio State University's Lima branch, who studies chickens in the Sunflower State.

Geoff Gould, one of Jackie’s doctoral students, escorted me to a blind on the edge of a prairie chicken lek, or dancing ground. After getting the lay of the land, I returned before sunrise the following morning.

As dawn cracked the horizon, the eerie whistled hoots of male prairie chickens began. Their mournful three-noted dirges were accompanied by frenzied squawks and clucks as the males jostled and sparred.

The males gather on leks to court females. Strutting their stuff, they inflate air sacs on the neck that resemble egg yolks to create their telltale booming whistles.

The much plainer females strolled about, seemingly ignoring the pompous antics of the males. They’re sizing up prospective mates, though — the alpha male is likely to mate with almost all the hens, while lesser males might not get any girls.

Greater prairie chickens now occupy but a shadow of their former range. Fortunately, there are still places where they thrive, and I am grateful to have experienced the magic of a chicken lek in its full glory.