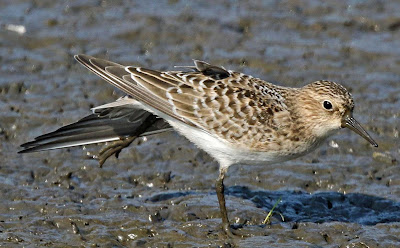 A big stretch from a small Baird's sandpiper

One of the most brutish flights an Ohioan can make is to Sydney, Australia. From Port Columbus, it’s well over 9,000 miles. Round trip: 18,000-plus miles and 46 hours flight time.

I have done it and wouldn’t want to make a habit of such a journey.

At least we have in-flight movies, snacks and comfortable seats.

Not so the Baird’s sandpiper, which flies just as far. I recently visited a wetland near Wooster and saw several of these feathered globe-trotters. The sleek little shorebirds scurried about the mud flats, gulping down small invertebrate animal life plucked from the mire.

This wetland serves as a refueling station for the Baird’s sandpiper and many other shorebirds. The other sandpipers and plovers include killdeer, semipalmated plover, greater and lesser yellowlegs, least sandpiper and Wilson’s snipe.

Few of the Baird’s sandpipers’ companions will match their journey, though.

The Baird’s sandpiper breeds in the highest reaches of the Arctic, where polar bears roam. The birds I observed were spawned about 2,500 miles to the north, and they have a long aerial trek ahead of them.

Some Baird’s sandpipers spend winter in Tierra del Fuego, at the southern tip of South America. Their yearly journey between summer and winter haunts is about the same distance as the Columbus-to-Sydney flight.

Only a small group of the 36 species of shorebirds that visit Ohio annually make such lengthy journeys. Evolution has endowed these long-haul fliers with traits that allow them to cover serious distances. Extra-long wings produce efficient, sustained flight. Powerful pectoral muscles provide plenty of punch to flap those wings. And a built-in GPS system allows unerring navigation over great distances.

The Baird’s sandpiper in the accompanying photo is a juvenile, as were the others I saw. The adults precede the juveniles by a few weeks on the southbound migration.

Almost all Baird’s sandpipers in Ohio are seen in late summer and fall. Their northward migration takes them well to the west, through the Great Plains states. The fall routes occur over a much broader front and well to the east of the narrow spring corridor. An elliptical pattern such as this probably evolved to take advantage of the best stopover habitats during each season.

Little data exists regarding the longevity of a Baird’s sandpiper, but it’s not unreasonable to speculate that some live for at least a decade. By the time such an elder would make its final flight to the great mud flat in the sky, it would have flown at least 180,000 miles. All this from a 38-gram dynamo with a wingspan of less than a foot and a half.

The sandpiper was named in honor of Spencer Fullerton Baird, an accomplished naturalist who served as the first curator of the Smithsonian Institution.

Baird was an inveterate field man and quite the traveler. During the calendar year of 1842, he hiked more than 2,100 miles in the course of his explorations.

Even that pales in comparison with the wanderings of his namesake sandpiper.

Naturalist Jim McCormac writes a column for The Dispatch the first, third and fifth Sundays of the month. He also writes about nature at www.jimmccormac
at September 06, 2015

I had to google Tierra del Fuego--oh my! I'd like to winter there!

Harvey and I think we may have seen a Baird amongst the semi-palmated plovers and kildeer at Conneuat Beach in the pools made by tire-rut making monster tire vehicles. Harv didn't know what it was after checking his guide; then I saw your post today. Maybe??) Thank you for your natural history update on the Baird's Sandpiper.

Harvey and I think we may have seen a Baird amongst the semi-palmated plovers and kildeer at Conneuat Beach in the pools made by tire-rut making monster tire vehicles. Harv didn't know what it was after checking his guide; then I saw your post today. Maybe??) Thank you for your natural history update on the Baird's Sandpiper.