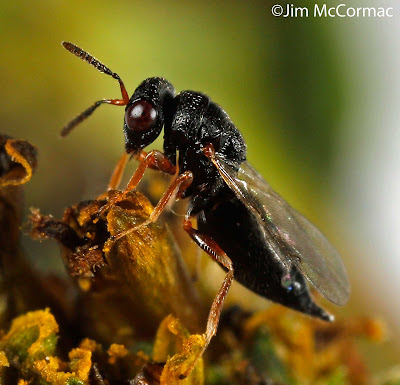 In my last post, RIGHT HERE, I wrote about a curious parasitoid wasp that was attacking the grubs of an equally curious gall-forming midge. I am a large fan of the small and obscure, and set about trying to learn of the mystery wasp's (photo above) identity.

I posted a few of my photos there, along with a detailed description of where and how we found the wasps. I didn't have to wait long. About 1/2 hour later, Ross Hill responded with some insightful comments, and he emailed the photos to wasp expert Dr. Eric Grissell.

Grissell's comments were soon in hand, and can be taken as the final answer - or at least as final an answer as we can get with the evidence currently available:

"Although it is a Rileya, I couldn't put a species name on it. Rileya americana was synonymized under Rileya insularis by Michael Gates in 2008. So americana would be wrong under any circumstances. Wish I could help you out better, but these wasps are difficult enough to identify when you can see them physically! Images are a bit more difficult".

So to attempt an absolute species-specific identification, I'd probably have to further impose on the good doctor, and send him some actual specimens. Well, at least we know the wasps belong to the genus Rileya. And that's not saying a lot, at least for us laypeople. Readily accessible literature on the group is sparse indeed.