Our most bizarre(?) caterpillar gets more bizarre

Earlier this fall, I wrote (with some excitement) about finally finding one of our strangest caterpillars, the Harris's Three-spot, Harrisimemna trisignata. That post, with photos, is RIGHT HERE. It describes the odd behavior of the caterpillar, and the equally strange appearance of the moth that it morphs into. 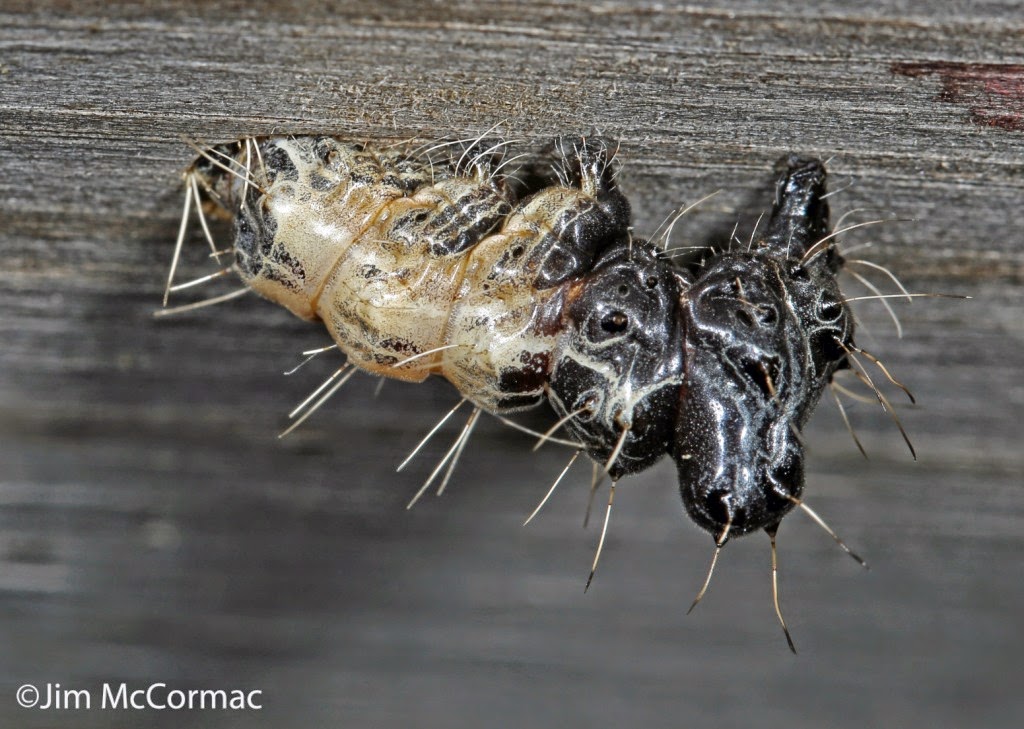 On a recent expedition into the New River Gorge area of West Virginia, I had the great experience of seeing another H. 3-spot. Rachel Davis and I ventured into the Wolf Creek Park wetland after dark, and Rachel spotted the beast above. She called me over, and WOW! We had stumbled into a 3-spot in the act of excavating its pupatorium.

That's right, the life cycle of this weird caterpillar gets even weirder. When it nears the end of the line for the caterpillar stage,the caterpillar bores a chamber into solid wood. We probably found this one not too long after it began digging, and at this point its chamber is deep enough to fit half its body in. The hole is being drilled into the untreated pine of a boardwalk railing. 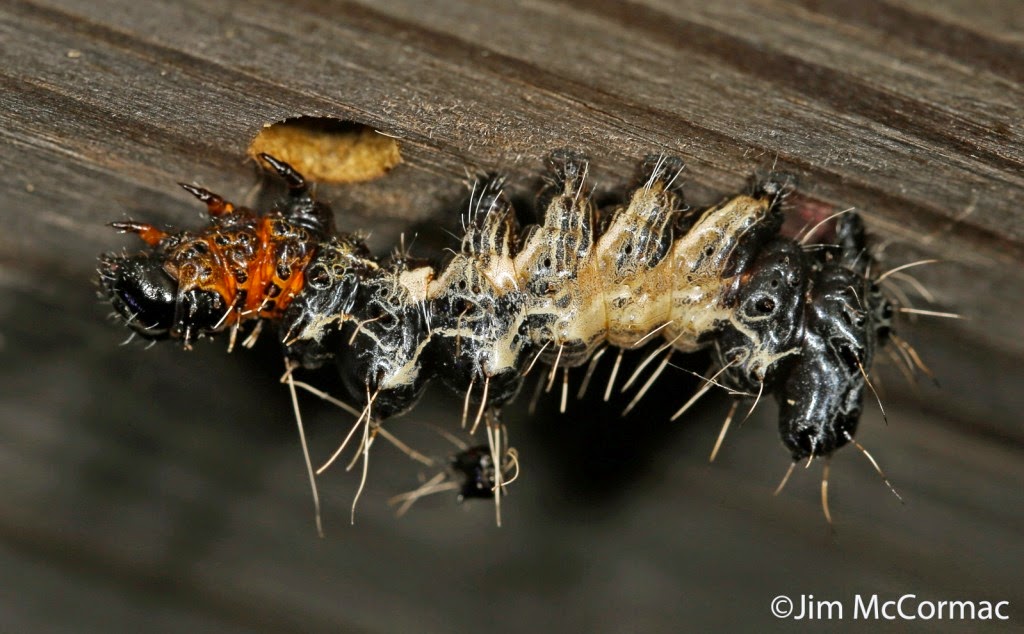 The caterpillar emerges, perhaps to take a breather and glare at the nosy paparazzi. But this allows us to fully appreciate its truly odd appearance. 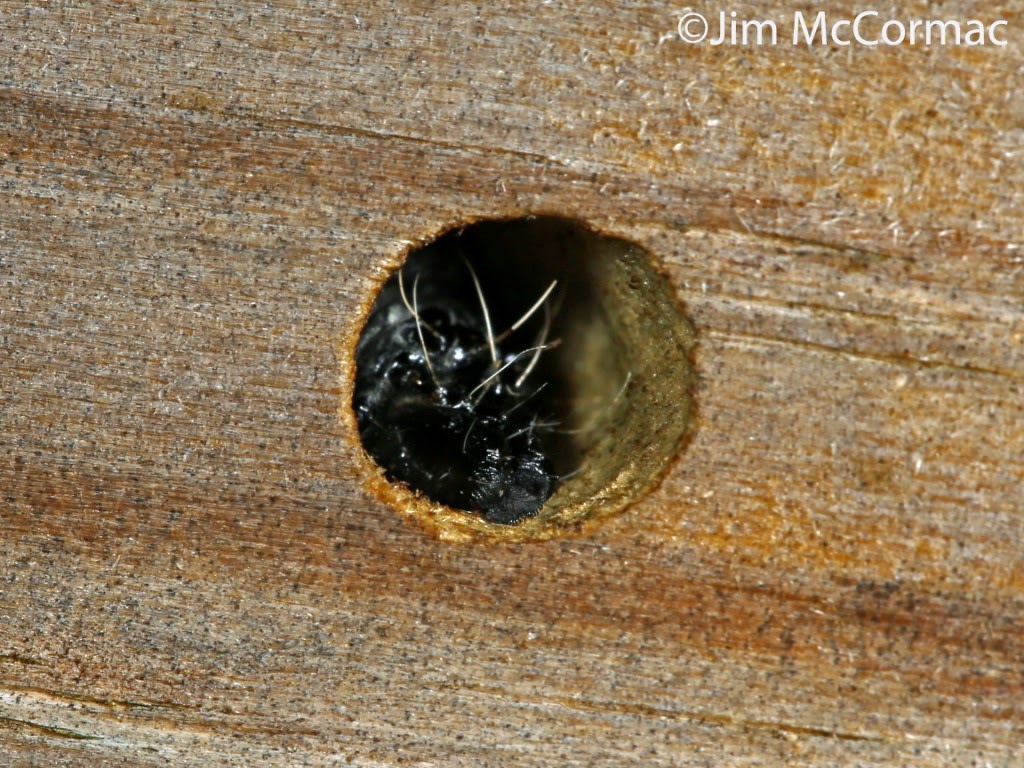 After waiting and watching for a good while, we learned that 3-spots tunnel quite slowly. So, we got bored, so to speak, and left. But I could not stand it and had to return the following evening to see what kind of progress had been made. We found that the caterpillar had deepened the hole to the point that it could now fit its entire body inside. In this shot, the tail end of the cat is all that is visible. 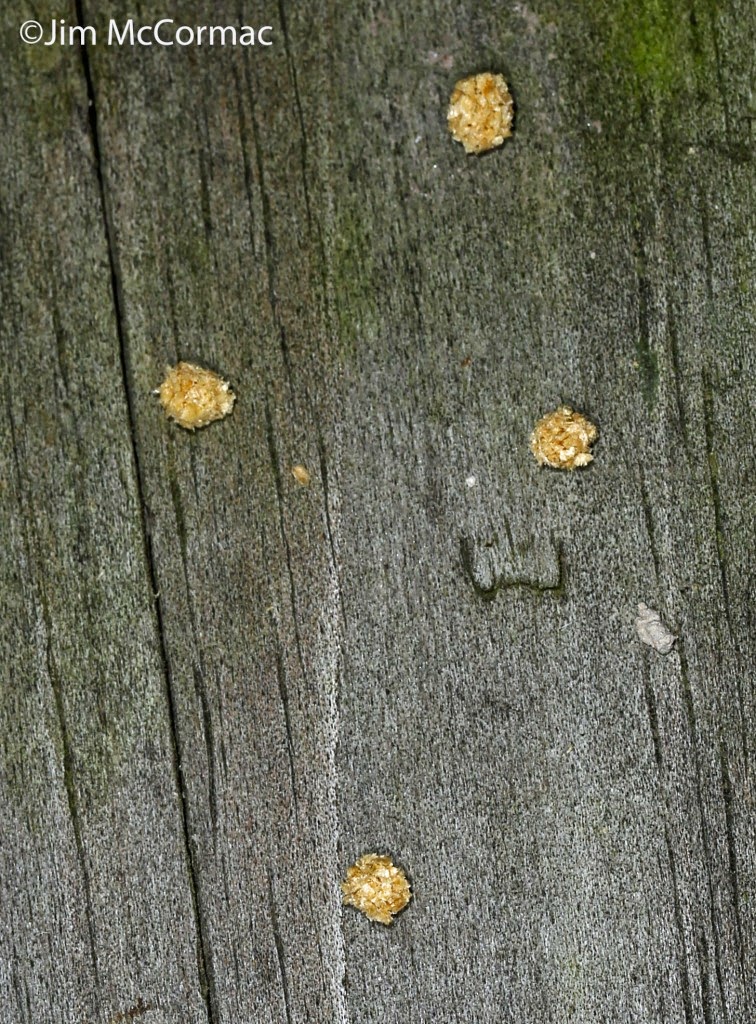 Evidence of its labors littered the boardwalk decking under the excavation. These little pellets are wood shavings, masticated and packed into globules. Having never witnessed this behavior - few people probably have - I was naturally curious as to how the caterpillar went about ejecting the excavated wood debris. We decided to wait and watch, and hoped that it would not be hours between pellet ejections. 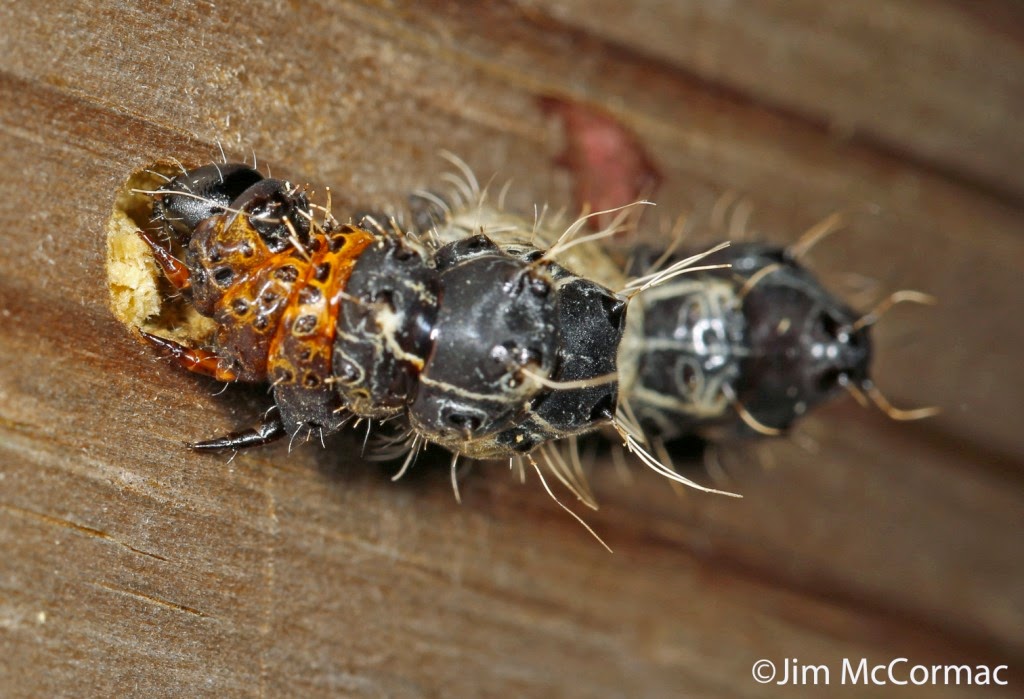 Here comes the caterpillar, lugging a pellet. It grasps the pellet in its mandibles and thoracic prolegs, and tugs it from the depths. 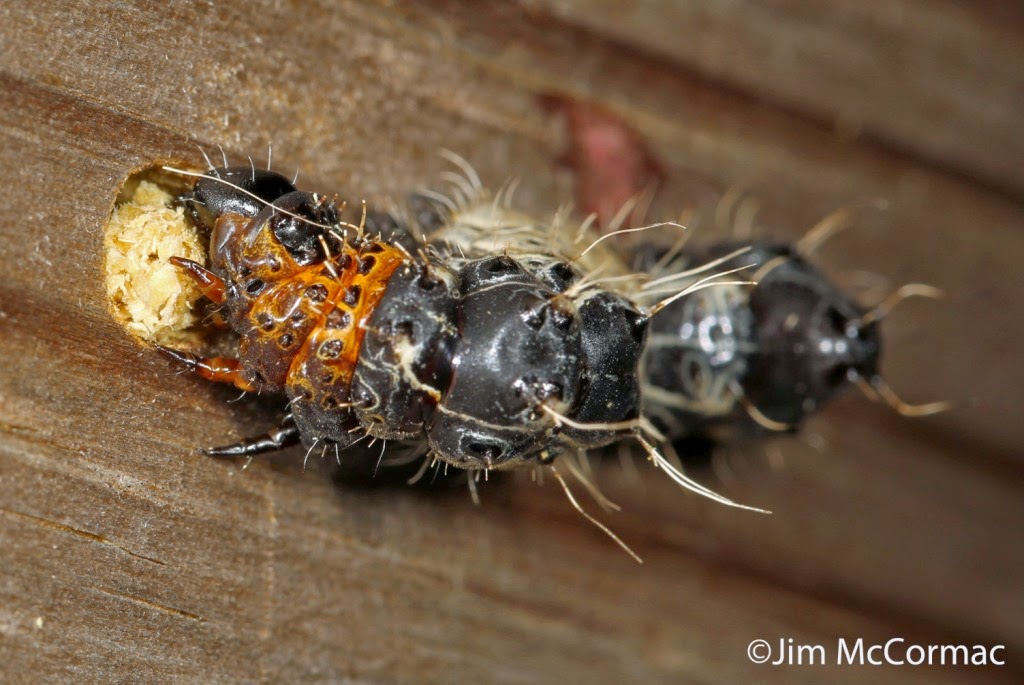 Out a bit further... 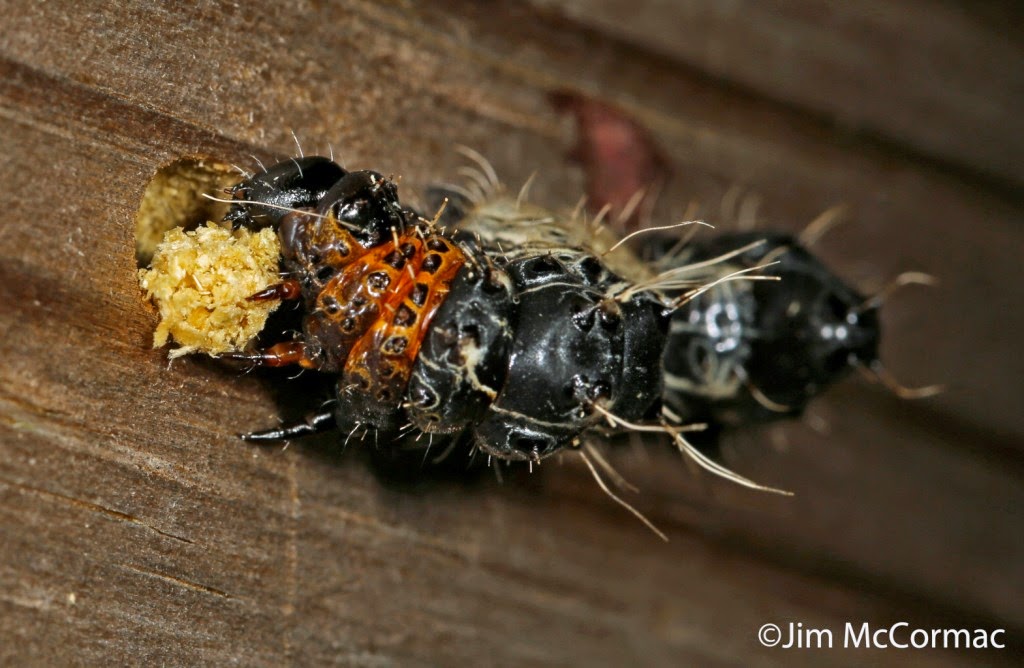 Seconds after I made this image, the caterpillar dropped the pellet to the boards below. From the time that we could first see the pellet apear to the time the cat dumped it was probably less than a minute. In general, it took about 20-30 minutes for it to fully form a pellet and bring it back to the burrow entrance and dump it. As the excavation deepened, the time between pellets seemed to increase. Presumably the caterpillar digs a wider chamber at the tunnel's end. Remember, the adult moth must emerge from this pupatorium next year. 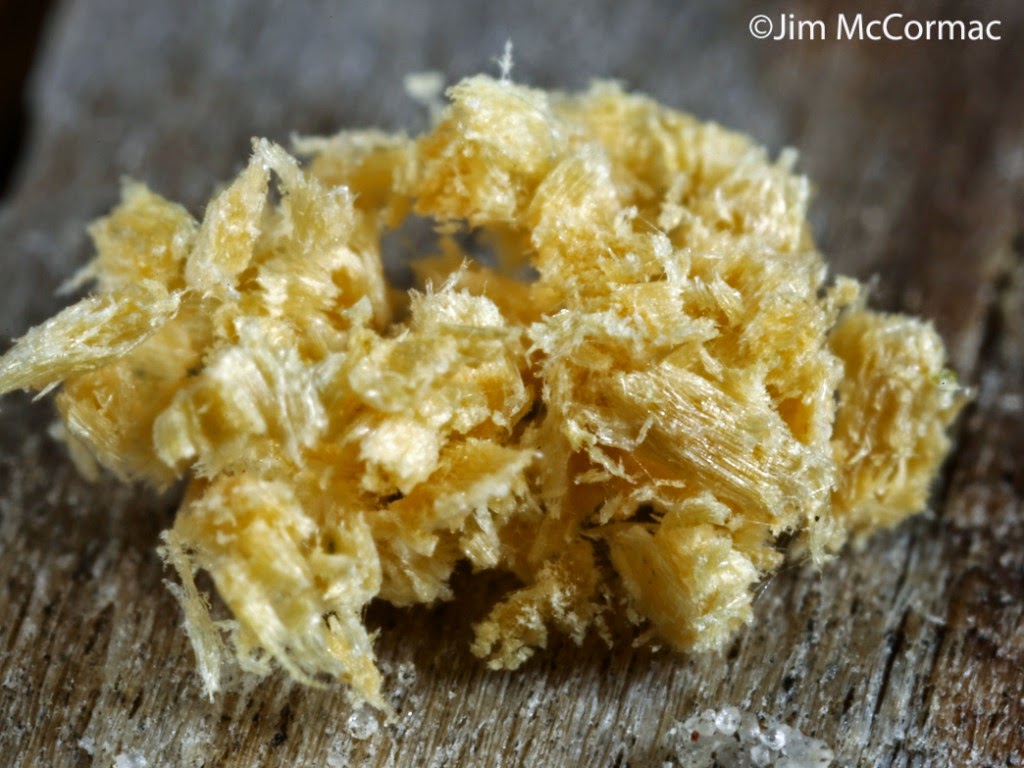 Here's a close-up of a pellet. Well chewed wood softened and loosely packed together. Harris's Three-spots must have very powerful mandibles. 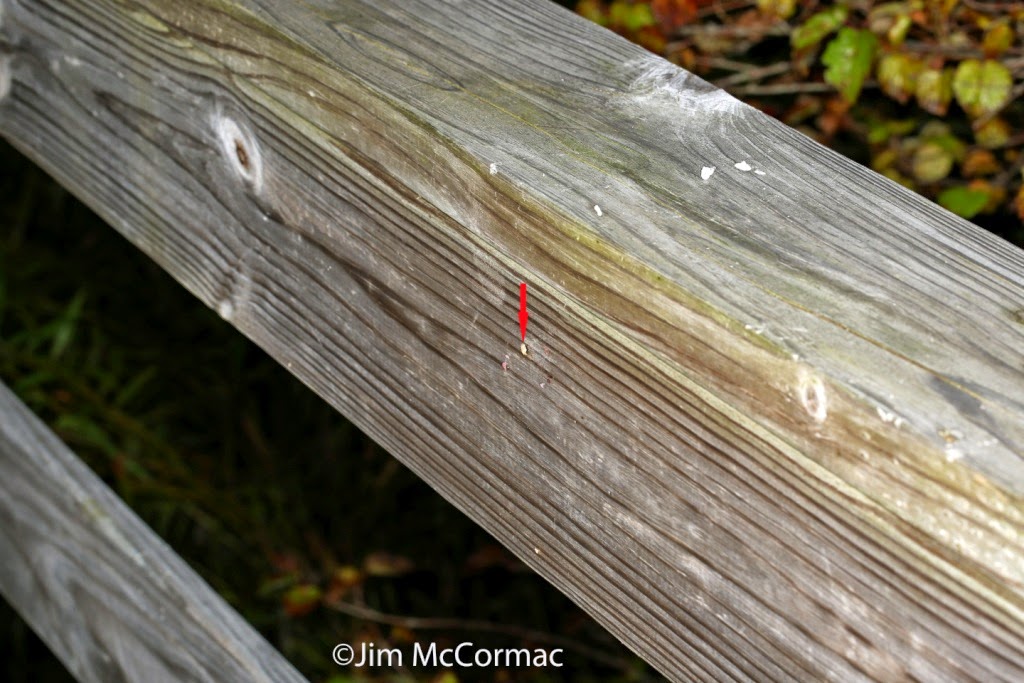 The small red arrow points down to the tunnel entrance. The boardwalk handrail provides a size context. I'm assuming that the caterpillar does its boring under cover of darkness, but we did not visit during daylight hours to see if anything was happening. 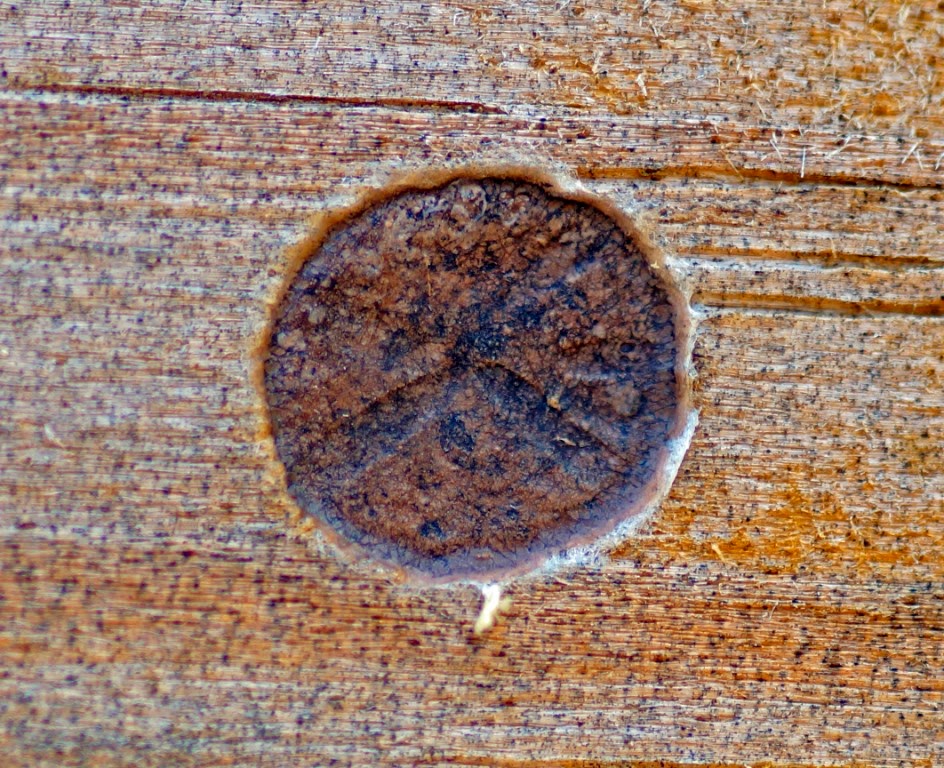 Rachel, whose office is in nearby Fayetteville, went back two days later to see what the tunnel looked like. It was done, and expertly sealed. While the entrance looks to be solidly plugged with wood, the cap is actually a thin veneer of silk produced by the caterpillar. Remember, the moth must somehow escape the tunnel late next spring, and apparently it can punch its way through this silk operculum. The silken cover disguises the pupatorium entrance well, and few if any creatures would probably pay it any mind.

David Wagner, in his ground-breaking book Caterpillars of Eastern North America, notes that Harris's Three-spot caterpillars consume a great many species of common woody plants. Yet the caterpillars/moths seem rare. In spite of years of searching, it wasn't until this year that I finally found this species. Many caterpillar hunters that I know have never seen one. I think the creation of its pupal chamber may be the species' Achilles heel. Spending two nights making the chamber leaves the caterpillar quite vulnerable to predators, and it seems likely that many would be picked off at this stage. However, if the caterpillar successfully completes the burrow and seals itself in, it is probably as safe as a caterpillar can be.

This is a fantastic post, Jim. Do you know if there's an equivalent caterpillar book for the West?

That's the best adventure story I've read in quite a while. Well done.
The insect world never ceases to amaze.

This is just super, super cool. Thanks for spending time to document!