I'm on a bit of a wasp jag, but so be it. Wasps are awesome. Yesterday, while taking a quick stroll around the planted prairie at work (described RIGHT HERE), I stumbled into two interesting species. The good ole Canon came through in decent form, and I managed a few images. 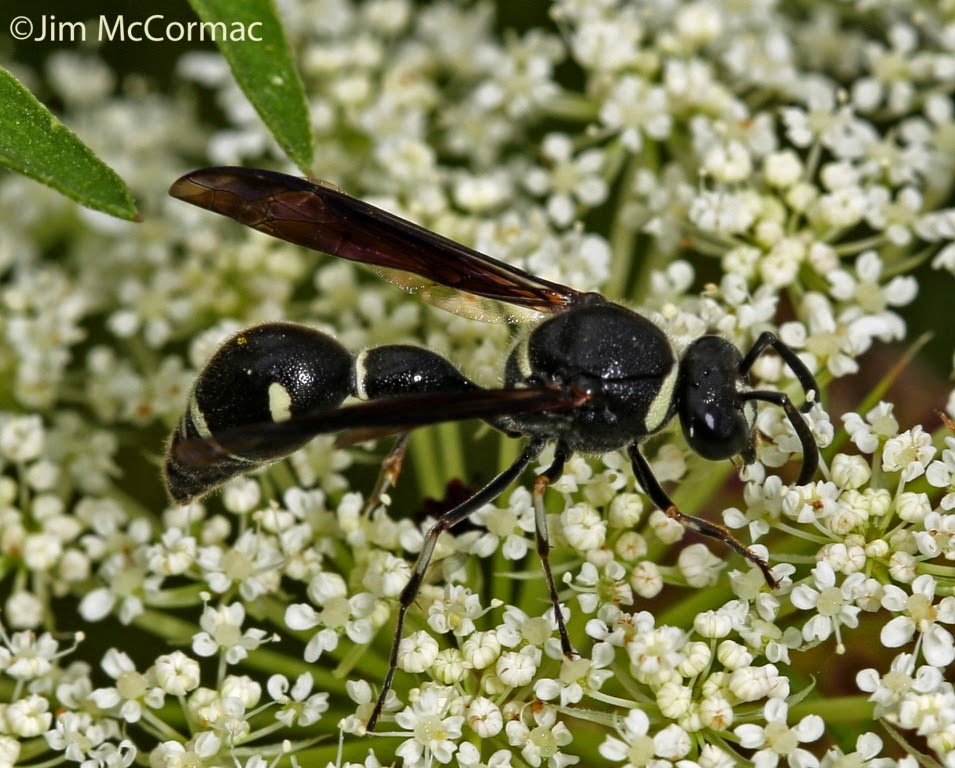 There is a smattering of Queen Ann's Lace, Daucus carota, persisting in the prairie. I don't totally begrudge this Eurasian weed its space, as it is a good insect magnet. Not as good as some of the native parsleys, but not bad. Anyway, I was pleased to spot this smallish Hymenopteran busily scarfing up nectar. After a bit of a chase, I pinned down a few passable images.

It is a Potter Wasp, Eumenes fraternus, and when not visiting flowers for nectar or pollen, these wasps engage in far more grisly behavior. 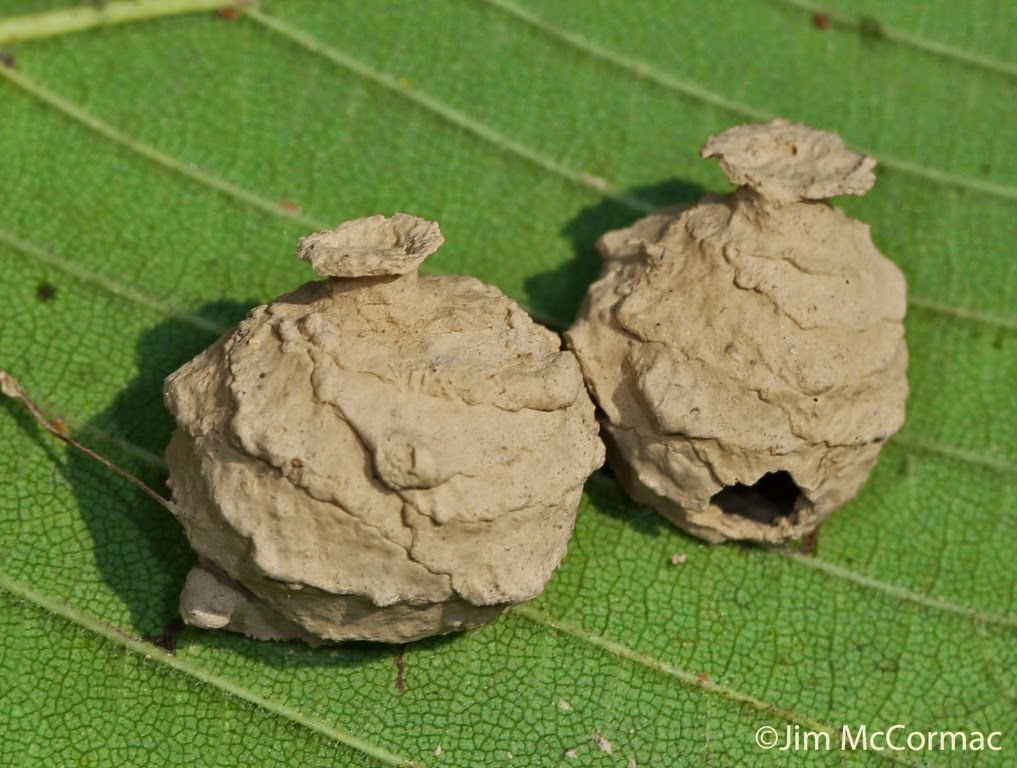 A few weeks ago, I found these little adobe jugs stuck to the underside of an American Elm leaf just a stone's throw from the prairie. They are the handiwork of the aforementioned Potter Wasp, and little works of art they are. The female wasp provisions each adobe with paralyzed caterpillars, and then lays an egg within the grisly nursery. Upon hatching, the wasp grub is assured a supply of fresh meat. 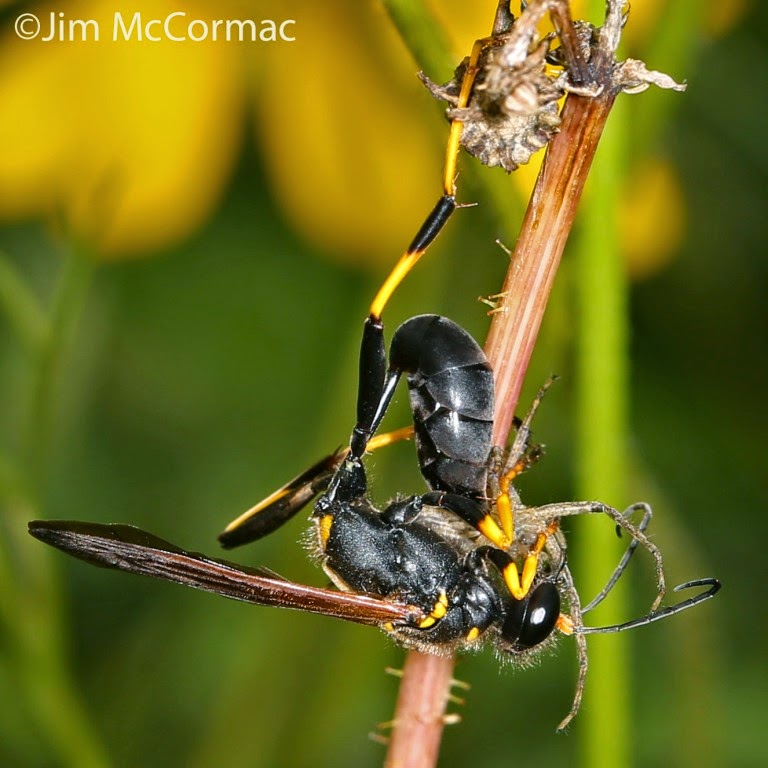 Now this is a bona fide beast of a wasp. It is a female Black-and-yellow Mud Dauber, Sceliphron caementarium. Until this day, I had never managed a decent image of one, although they are fairly common. Unless one stakes out a nest that is actively being provisioned, or a muddy spot where nest material is being gathered, you are most likely to encounter a foraging female moving through the plants.

When on the hunt, these big wasps are frenetic. They clamber about plants in a fast, rather maniacal manner, rapidly inspecting flowers, stems, and leaves for victims. Black-and-yellow Mud Daubers are possessed of extraordinary senses, and if they detect a large bipedal interloper moving in, they're off in a flash.

However, in this case I spotted her from afar, and hung back. I knew she was on the hunt, and hoped she'd score a victim. All of a sudden, WHAM! She spotted a luckless spider cowering on a stem, and whacked it quick as could be. I was ready, and rushed into range, clicking away. The above photo shows her still in the act of stinging the spider with a potent neurotoxin which disables the victim nearly instantaneously. Her abdomen is doubled back nearly 180 degrees, and the ovipositor at the business end is firmly embedded in the spider. 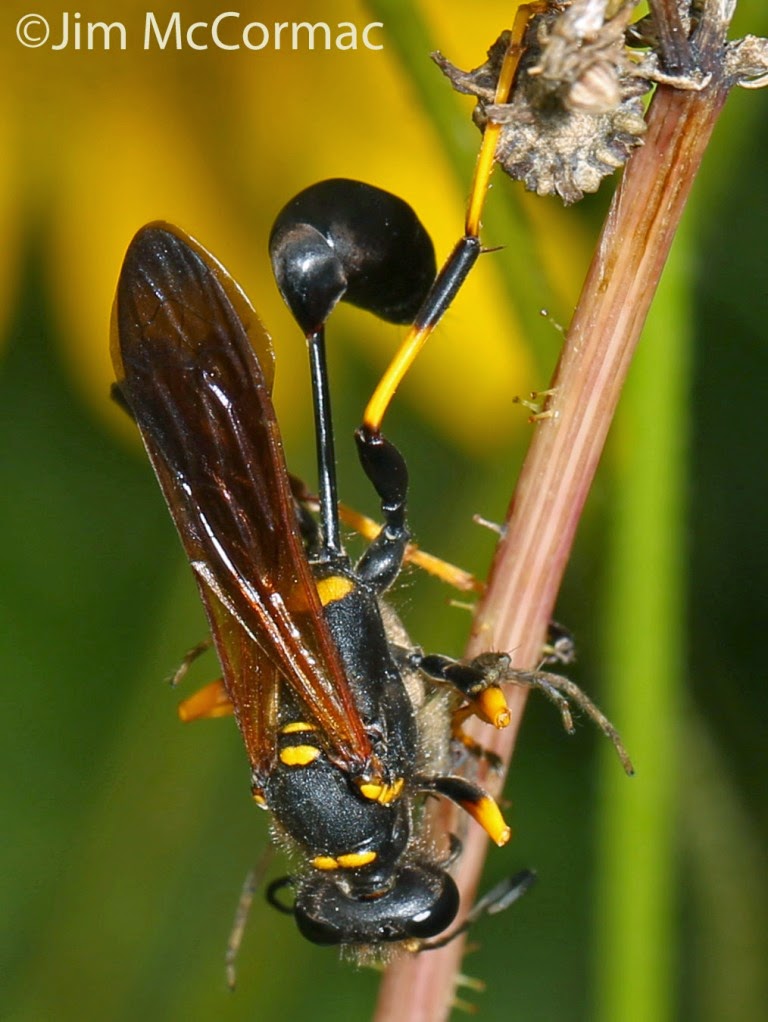 You can see where the expression "wasp-waisted" comes from! In a few seconds the spider was sufficiently comatose and ready for transport to the nest. 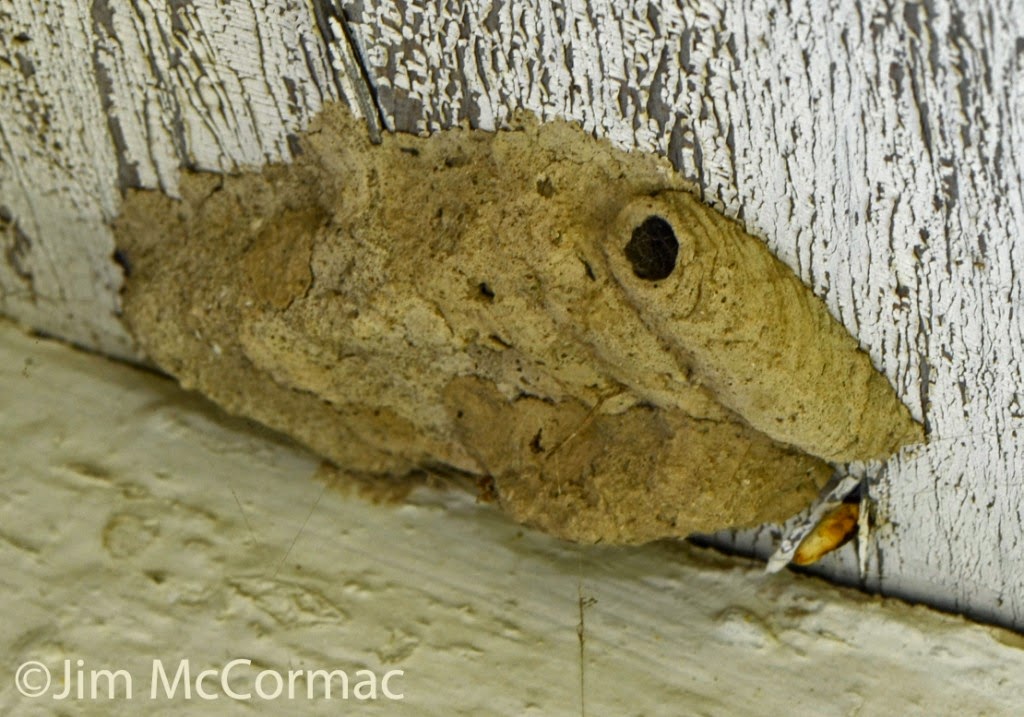 These are the multifaceted chambers of a Black-and-yellow Mud Dauber nest. Like the Potter Wasp, it is made from wet earth which is artfully - and laboriously! - fashioned into these fancy crypts. You may have seen these stuck to the eaves of a building. The wasps often select human-built structures for their nest sites.

The story is largely the same as the Potter Wasp, except that this species provisions its chambers with paralyzed spiders rather than caterpillars.

If wee beasts were capable of the same level of thought, reasoning, and consciousness that we are, one can only imagine the constant level of terror that creatures such as spiders and caterpillars would endure. Just imagine a giant long-legged wasp tearing your way, and knowing in advance what your fate will be. It would be like living a Japanese horror sci-fi movie, except it's all real.

Hi, Jim- LOVE your wasp images and info. I've loved Potter Wasps ever since I discovered one putting a mud plug in the screw holes of my boom box outside, and looked it up and learned what it was doing.
May I print a couple of your Rough Boneset photos to stick into my wildflower guide?
Thanks!
Lyn Miller

Very interesting and great photos! Thanks..Wasps are fascinating. The Digger Wasp is an interesting one too