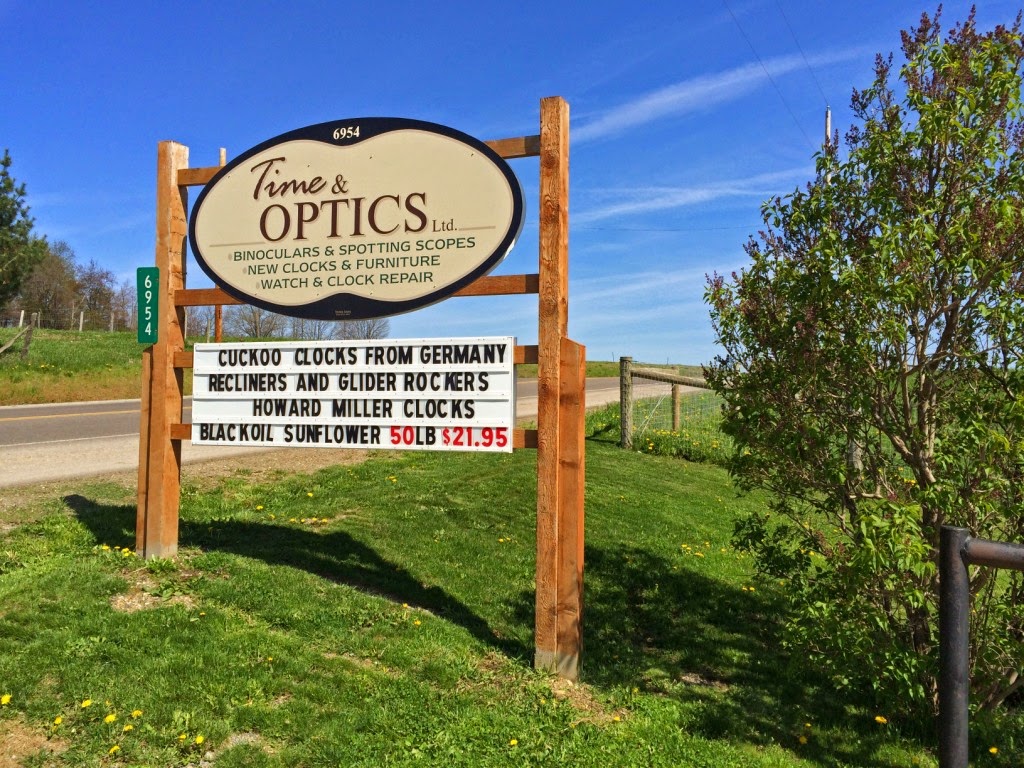 Time & Optics, Ohio's most legendary vendor of optics. Many of us know the proprietor, Robert Hershberger, and I'll bet that more than a few people reading this have made the visit to Holmes County to visit Robert and his shop. If you want some binoculars or a scope (or a clock!), this is your place. CLICK HERE for more info.

Robert is a great birder, as are many others in his community. Because of the extraordinary concentration of ace birders in Holmes County, an extraordinary number of mega-rarities have been found in this area. Now we can add Rock Wren, Salpinctes obsoletus, to the rarity ranks. 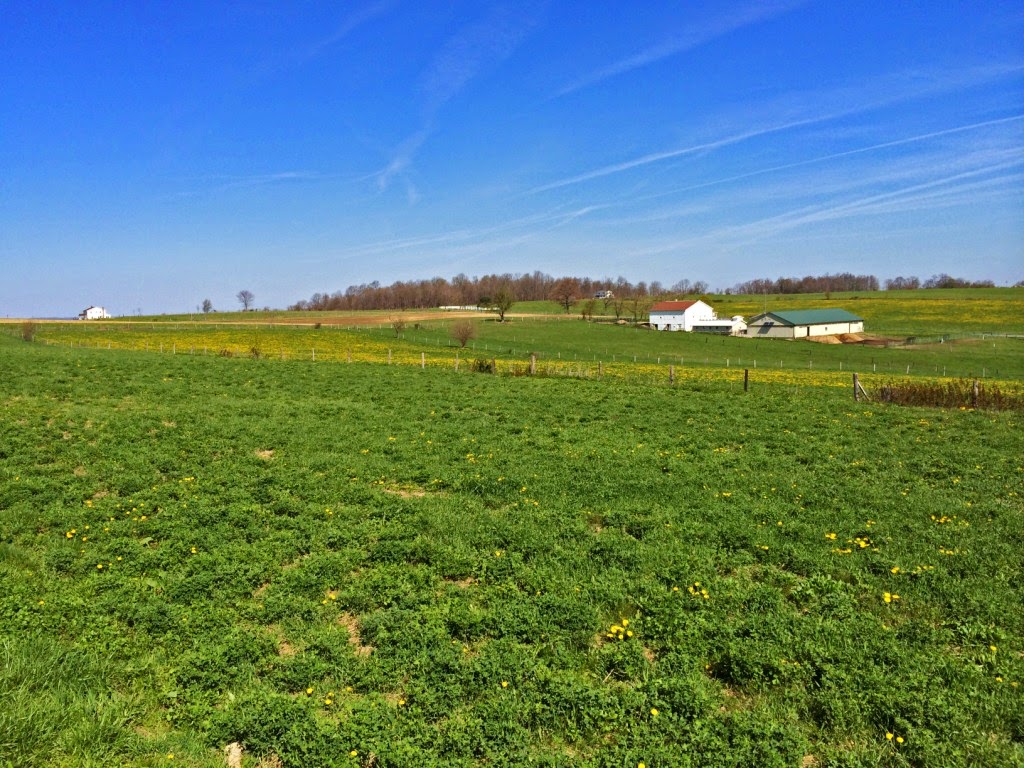 This pastoral scene is where the wren hangs out. A pleasing place to chase a rare bird, for sure. I met up with Hallie Mason at Time & Optics, which is just a stone's throw out the right side of this photo. We got there at 8 am (this was yesterday), and along with some other birders plodded about fruitlessly for an hour or so. The Rock Wren works between several sets of buildings, and covers a fair bit of ground.

Finally, a wonderful woman rushed over to us and shouted that they "have the bird!" Yes! The only problem was that the wren was down by that green-roofed building, and I was a quarter-mile or so away. I began a brisk walk in that direction, and before long saw a small throng, all of whom had their binoculars fixed at a certain point. As I moved along, I stopped occasionally to try and pick up the wren, too, by scanning where they seemed to be looking. No luck, and well before I arrived I saw all of the birders drop their binoculars and watched as they pointed to the bird as it apparently fled up that grassy slope.

No luck - I wasn't close enough to spot it. 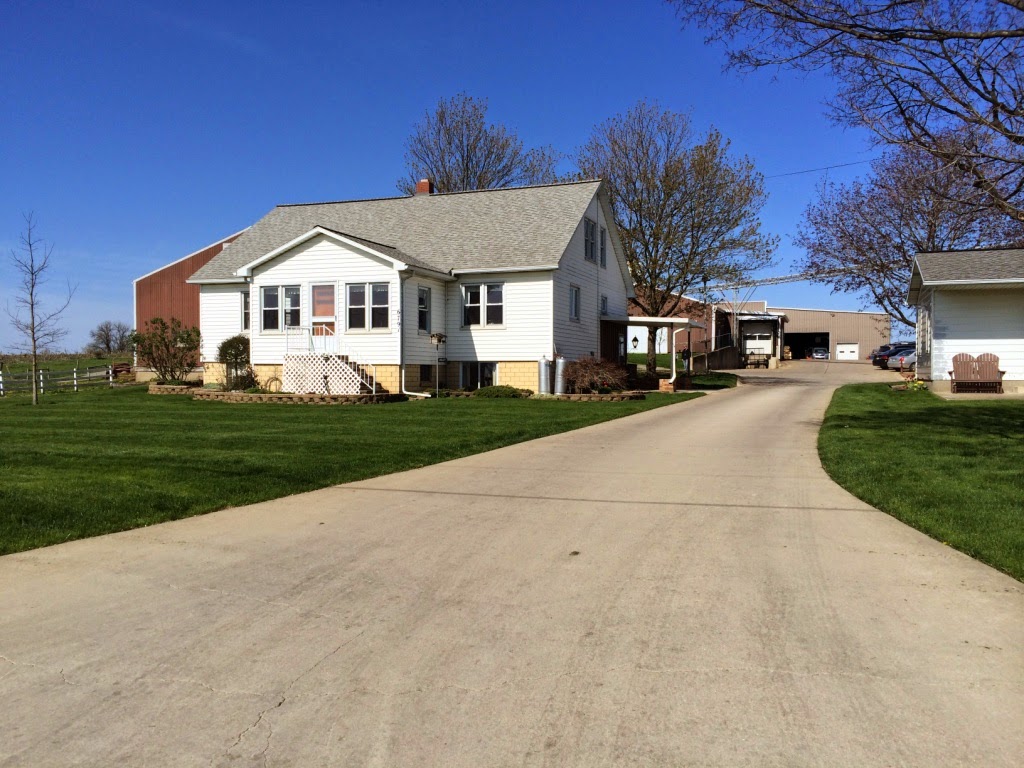 So, I/we immediately began a fast walk up the roadway to this house, which is where the wren headed to. Now I know that wrens are hyperactive bustling little busybodies, and I feared the bird was playing games. As soon as we arrived at this spot, I figured it would shoot back down the hill and to some other distant building. I would spend my day off chasing a pranksterish wren through the leas and around various outbuildings of Holmes County.

Luck was with us! We weren't at the spot in the previous photo for five minutes when Hallie spotted the animal. It obliging hopped from the flowerbed and posed briefly on a small retaining wall, allowing for photos. Bingo!

Rock Wrens breed throughout the western half of the United States, barely extending into Canada. They are extremely rare vagrants to the eastern half of North America; there might be two dozen or so records, ever. Prior to this bird, there was only one record in Ohio: December 7-14, 1963. That bird hung around rocky riprap at Cleveland's Edgewater Park. Needless to say, very few people who are still around have this species on their state list.

I mentioned that Holmes County sports an incredible density of topnotch birders. One of the stellar Holmes County birders is Michael Hershberger, and he works at Hochstetler Wood, and that's where Mike found the bird. He walked out of the building, caught a glimpse of the western stray rummaging around some wooden pallets, and instantly nailed the identification. The rest is history.

Rock Wrens are well-named. They live in rocky canyons, gulches, and other stoney haunts, and use that long slender bill to ferret around in fissures and crevices. Here's a great quote about the Rock Wren, courtesy of John Janovy (Keith County Journal 1978):

"Salpinctes obsoletus is a very plain name for a bundle of fire known as the rock wren. It is heard, up on the bluffs, up in the rocks, but it is seen only by those who climb the bluffs regularly, and then it is seen only irregularly. . . . After reading even the most elementary writings of the rock wren I am shocked at society’s ignorance of this bird."

As of today, the little wayward wren is still present, and exciting an ever-growing legion of admirers. From my observations, the celebrity Rock Wren cares not a whit for his fan club. He/she pokes through the mulch beds and probes into cracks as if none of us were there. 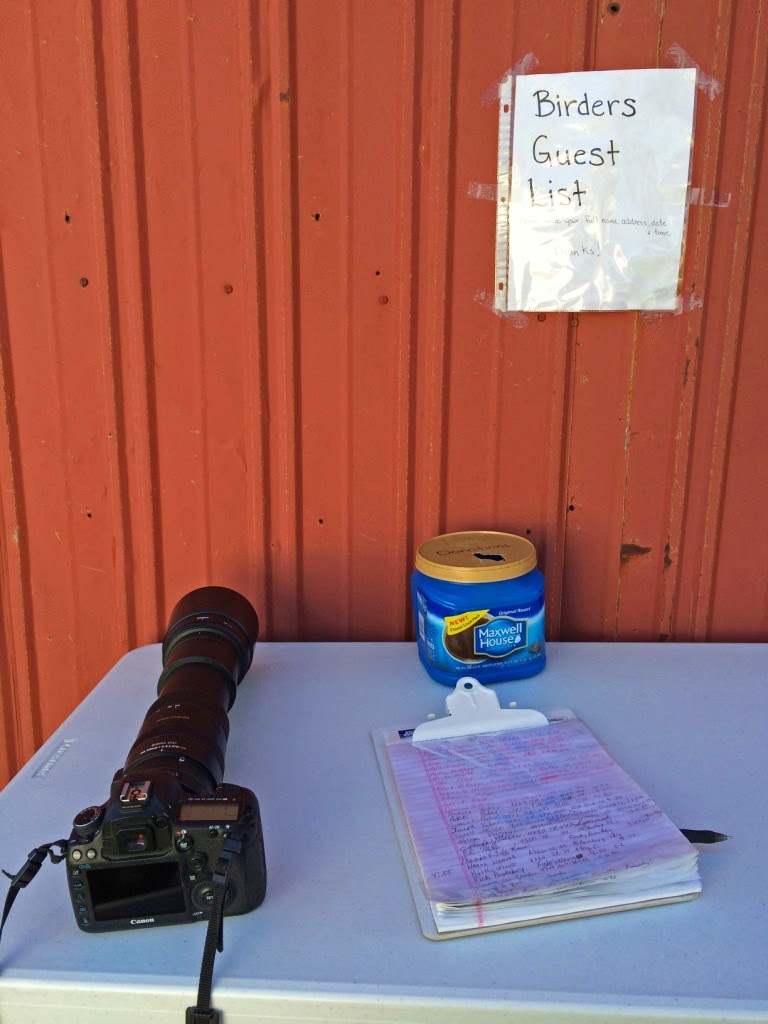 As is the custom, a guest log was begun, and many a page is now full of names. Something like 500 of them, from all corners of Ohio and beyond. Many people probably didn't sign in, either - the actual attendance at the Rock Wren Meadows might be 700 or more people by this point. Most politicians can't draw a crowd like that.

Major thanks are in order to Michael Hershberger for making a truly spectacular and utterly unexpected find. Big thanks too to the operators of Hochstetler Wood and everyone who works there. They've tolerated the birder invasion with remarkable tolerance and aplomb. Not all businesses would be so accepting of having our kind lurking around the buildings.

Oh, being as I am far too young to have tallied that 1963 Cleveland Rock Wren, this was indeed a state bird for me. #371 to be exact.

I actually held one of these little guys just a few minutes ago in my carport. Just sat there perched, let me give him a stroke or two, then I extended my hand and he took off. Cute lil thing.
-Shoova

(Suburb just outside of Cleveland, Ohio)

I actually held one of these little guys just a few minutes ago in my carport. Just sat there perched, let me give him a stroke or two, then I extended my hand and he took off. Cute lil thing.
-Shoova

(Suburb just outside of Cleveland, Ohio)