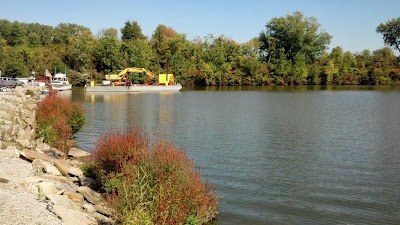 An unassuming backwater of the Huron River in Erie County, Ohio, not far from Lake Erie. I visited this spot last Saturday to attempt to observe one of the strangest animals that swims our waters. I had seen a report of Freshwater Jellyfish (yes, jellyfish!) in an article in one of the local papers, and happened to know the person who was quoted, Brenda Culler. Brenda works for the Ohio Department of Natural Resources' Office of Coastal Management, and she was good enough to tip me to the jellies' location. Apparently a local contractor - possibly the operator of that dredge - had seen hundreds if not thousands a few days prior. I was keen to make the scene, having long wanted to see one of these aquatic curiosities.

Thanks to the intrepid Jess Henning of Erie County Metrparks, I was able not only see one of the jellyfish, but photograph one as well. Jess boated out into the river with her one-man canoe, and after a bit of searching located several jellies and managed to scoop one up. After caging the jellie in a suitable container, it was off to the center at Osborn Park to transfer the animal to an aquarium and attempt photos. I can tell you these are not easy creatures to shoot. One, they are under water. Two, a jellyfish is basically an amorphous translucent bag. And three, they move with constant pulsations of their filmy bell-jar covering. But I tried... 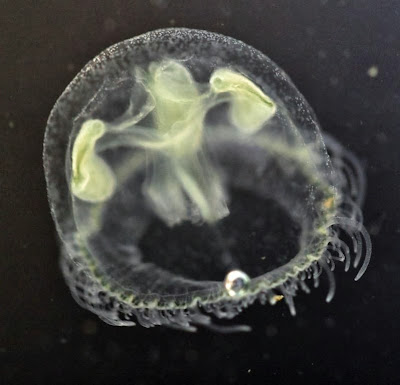 A Freshwater Jellyfish, Craspedacusta sowerbii, glides through the water. It's hard to believe that such creatures cavort in Ohio waters, and it's probably a good thing I am not posting this on April 1. But indeed we do have jellyfish, and they're probably far more of them than get noticed. There are many records from all around Ohio, with most from quarries and lakes with relatively clear water, and that are used heavily by people. Divers, boaters, and waders occasionally are shocked to see these, although they have to be looking close or there must be scads of jellies. These animals are only about the diameter of a quarter.

Cool as it would be to have native jellyfish, that's not the case. The Freshwater Jellyfish hails from China, as do so many of our invasive species. I'm not sure that the jellies are best considered "invasive", though. There doesn't seem to be any evidence that they displace or detrimentally impact native species. As far as I know, the jellies are just aquatic curiosities.

From their native range in the Yangtze River of China, the Freshwater Jelly has spread to far-flung reaches of the globe. It apparently first turned up in 1908 in the United States, and was found in the Huron River in Michigan in 1933. New locales are constantly added. It doesn't seem that anyone knows for sure how they are transported to new water bodies, although it is likely they first entered North America and the Great Lakes via ballast water in ocean-going freighters, as have a number of other nonnative species. 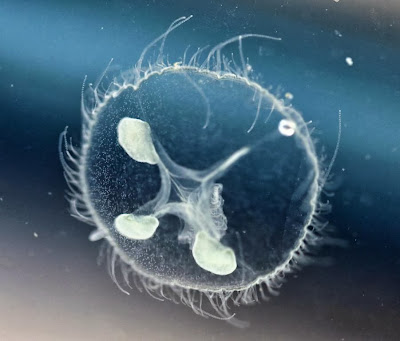 In this view, we're looking down through the translucent top of the jellies' bell. The body is fringed with tentacles sporting nematocysts, or stinging cells. Freshwater Jellyfish use their stinging tentacles to immobilize tiny prey, but cannot harm people due to their small size. As I understand it, the oblong-ovate whitish objects within the bell are the gonads, and the mouth is in the center of the filmy tissue connecting the gonads. Prey is moved by the tentacles to the mouth, where it is absorbed. In keeping with the bizarre nature of this beast, waste products are also expelled via the mouth.

Well, there you go. Freshwater Jellyfish, in Ohio. I don't want to ever say I've seen it all, but I'm getting closer.

I had no idea there were Freshwater Jellyfish. Such tiny creatures. It is no wonder people aren't aware of them. I always learn something while reading your blog. Thanks.

They have turned in up in many abandoned quarries in the Huron and Rouge watersheds in SE Michigan. As they are not photo-sensitive creatures, I imagine they get around underground through small passageways in the Devonian layers under our part of the world. They are fragile fellows, but also small. Yes, not all of the local area is limestone deep underfoot, but we sure have our fair share of it.

Wow. I grew up about 1 mile from this spot. Can the sting?

I just found my answer: Just like salt water Jellyfish they do have stinging cells. However, these cnidocytes cells are used for paralyzing very tiny prey and have not been proven to have the capacity to pierce human skin.

Nature: Orange you glad you saw lots of orioles this spring?

A male Baltimore oriole plunders an orange/Jim McCormac Columbus Dispatch May 31, 2020 NATURE Jim McCormac This was the spring ... 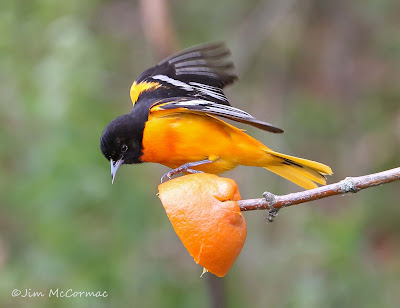