Biden's Grass-Veneer: a life moth, and a mystery 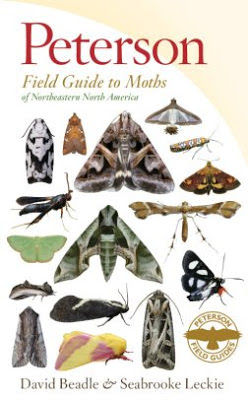 This book could be the death of me, I'll tell you. Now, finally, we've got a great guide to the moths (or many of them), featuring excellent full color photos. It's fun (for me) to page through looking at all of the neat moths that fill the pages. To be honest, most of my paging occurs when I'm trying to identify something, and have to flip through nearly every page on the book before making a match. Do that enough times, and you'll get somewhat acquainted with the guide's subjects.

Sometimes, one of the moths jumps from the page and really grabs my eye. For some reason, the species at the bottom of page 147 did just that: Biden's Grass-Veneer, Crambus bidens. The grass-veneers are mostly small and undistinguished, and some are regular visitors to nightlights. I get them on my porch, occasionally. But this veneer was different. It was splashy in a quite unveneerlike way, and I instantly wanted to see one.


Saturday, June 22, 2013 found me in Brown's Lake Bog, Wayne County, ostensibly to photograph blooming Rose Pogonia orchids, Pogonia ophioglossoides, but of course I was attempting to look at everything and anything. Suddenly out popped a little white and brown moth that had been lurking on the underside of a blueberry leaf until I clumsily bumbled into the plant. The moth shot off, me in pursuit, and when it alit - Bingo! I was treated to my first Biden's Grass-Veneer!

A beautiful animal indeed, as I'm sure you'll agree. A bit goofy, perhaps, with that long furry snout and tubular body, but among the veneers, this one gets the tiara. The juxtaposition and patterning of the rufous-brown and show-white is nothing less than stunning. 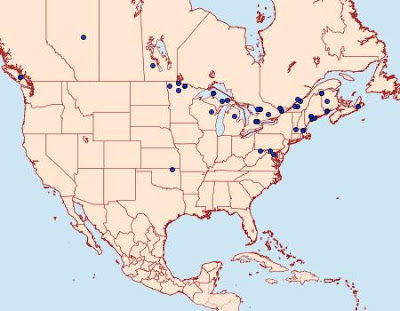 In Ohio, bogs are rare indeed, and I view all bog-inhabiting organisms with suspicion. Rare habitats support rare organisms, and when I see something that I don't know anything about in such a place, I want to know more.

In the case of the Biden's Grass-Veneer, I quickly hit a brick wall in my quest for knowledge. The map above is from the Moth Photographer's Group, which is probably the best and most comprehensive resource for moths on the Internet. Their map shows no Ohio record. But I do take that with a grain of salt, as gleaning every record of all moths in each state is a tall order indeed. I have a list of some 2,000+ species of moths collected in Ohio that was given to me by a professional entomologist, and Biden's Grass-Veneer appears on this roster. But only its name - no other info at all.

According to the aforementioned book and a few other reliable sources, Biden's Grass-Veneer is a denizen of bogs, but all of these sources list the host plant as "unknown". Most species of grass-veneers eat, duh, grass, as the name would imply. However, grass (of any species) is a fairly scarce commodity in a sphagnum bog such as Brown's Lake Bog, where I found this beast. My hunch is that the Biden's Grass-Veneer's caterpillars do not feed on grasses, but instead snack on some type of bog specialist plant.

I also wonder what this moth's true status in Ohio is. If it truly is confined to peat bogs, it ain't going to be common, because bogs are in short supply. If anyone can shed any light on the mysteries of the Biden's Grass-Veneer, please let me know.

Hi Jim -Interesting article. Bug Guide had a note on this species where they speculated that the species name refers to the moth's larval food. http://bugguide.net/node/view/85970
Cool Moth though and thanks for sharing.