Superfly, and an even cooler cat

Life has been especially busy of late, but I've been seeking interesting flora and fauna between speaking gigs, writing, and work with modest success. I love football, and like to catch as many Ohio State games as possible, which is maybe half of them if I'm lucky. Yesterday was one of those football Saturdays when I was in town, so I headed up to watch the game with my parents, at their wonderfully wildscaped home in Worthington.

At the half, I trotted out to the backyard, where interesting animals can nearly always be found. Fortunately, I had the Canon T3i in tow, as I spotted the following beast, straight out of BizzaroWorld.

A picture-winged fly, Delphinia picta, regards your narrator with its inscrutable visage. As I passed near the metal hull of the home's air conditioning unit, I noticed an oddly shaped small insect sitting on it, seemingly unconcerned about being exposed. My first impression, from afar, was of some sort of predator. It actually resembled a large pseudoscorpion, and from other angles, perhaps a jumping spider. To be honest, I wasn't really quite sure what it was, but after fetching the camera and frame-filling the lens with the animal, it was obviously a fly.

It's apropos that this fly's specific epithet is picta, which means "painted". That descriptor stems from its wings, which are ornately marked.

I have searched around a bit for information on this species, but have found little beyond its feeding habits. This species of picture-winged fly - there are dozens of other species - feeds primarily on rotting vegetation. Apparently fallen, overripe fruit is often used, and that would make sense as there is a crabapple that has shed plenty of fruit nearby. The larvae wallow about in the mushy old fruit, and eventually morph into the rather attractive fly shown in these photos.

But back to the potential mimicry. Like I said, my first reaction was of some sort of predatorial bug, based on three things: it was sitting in the open, seemingly unconcerned and as if it were on alert for victims; the fly looked like some strange little arachnid or some other dangerous thing from afar; and finally, when a larger fly landed nearby, the picture-winged fly pounced in its direction, seemingly aggressively. It also locomoted in the manner of a jumping spider, with quick, jerky lunges.

Insofar as I know, adult Delphinia picta flies are completely vegetarian, like their larvae. Any attempt to look like and act like a bad guy would just be bluff, to dissuade legitimate bad guys from making a move. 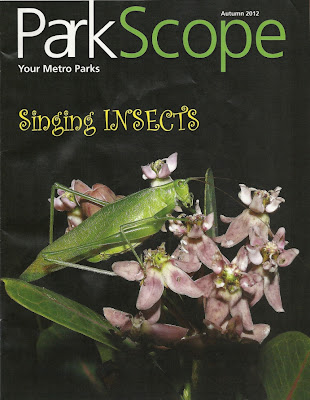 Later that evening, I headed up to Highbanks Metro Park to conduct a symposium on "singing insects". This gig stemmed from an article that I wrote on Orthopteran insects which just appeared in the Franklin County Metro Parks quarterly magazine ParksScope. I appreciate the magazine's editor, Virginia Gordon, inviting me to pen this piece, and plastering my photo of a broad-winged bush katydid, Scudderia pistillata, on the cover!

We limited the lecture/night hike to 25 people, as any more than that and the group becomes unwieldy in the field. And as always, I wondered if anyone would be interested enough in bugs to sign up. I need not have worried - it filled quickly, and a waiting list formed as well. People are enchanted with the singing insects, and I think much of this fascination stems from familiarity. Virtually everyone who ventures out at night, even if only to the backyard, hears the great wall of sound put up by the nocturnal six-legged fiddlers. When presented with an opportunity to learn more about them, many people are interested.

An extraordinary caterpillar indeed, the grandly named Asteroid, Cucullia asteroides. As with so many other caterpillars, this is a reverse ugly duckling tale. The caterpillar is stunning, looking as if it was handpainted by elfin artisans, then given a glossy coat of wax. It'll mature into one of the myriad owlet moths; a total plain jane, at least by the standard of beauty set by the caterpillar.

Someone in our group last night - wish I could remember who! - spotted The Asteroid, much to the delight of the crowd. We also saw and heard plenty of singing insects, our primary target, but this Asteroid was a huge bonus.

It turned out to be showering Asteroids last night - we ended up finding three of them. Part of our short trek took us by a small field full of grass-leaved goldenrod, Euthamia graminifolia, in full bloom, and it was those plants that the Asteroids were feeding on. I was quite pleased with the opportunity to make some new images of these showy tubes of goo, and I think the other field trip participants were also enamored by the elegant cats.

Thanks to Elizabeth Fields, naturalist at Highbanks Metro Park, for helping with the program and field trip, and to the other park naturalists that attended and helped find The Asteroids and many other interesting creatures of the night.

Picture-winged fly! That's what I occasionally see on our outdoor hibiscus! Thanks, Jim!