A pictorial ramble along the Grand River

The beautiful Grand River, as seen from Lake County Metropark's River Road property in Lake County, a state and national treasure. I shared a bit of last Sunday's trip HERE, focusing on the bounty of "dancer" damselflies that we found. But we saw much more, and a few photographic highlights follow.

Three major features of the Grand River can be seen in this photo. One, the thick buffer of forest, which is typical along most of the Grand's course and the reason its water quality is so good. Two, steep shale bluffs punctuate many of the river bends, providing an aesthetic contrast and providing habitat for some interesting flora and fauna. Finally, the thick bed of "grass" in the foreground is actually a dense stand of Emory's sedge, Carex emoryi. This riparian sedge is abundant along the Grand and its luxuriant growths provide habitat for many animals.

John Pogacnik and I had barely set foot onto our first gravel bar when John spotted this tiny butterfly. A dainty sulphur, Nathalis iole! This thumbnail-sized animal is an immigrant from the deep south, and rare in northern Ohio. 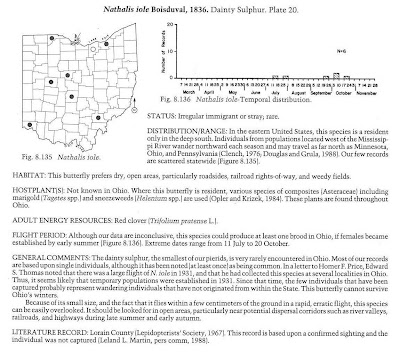 Here's the dainty sulphur species account and range map from the Butterflies and Skippers of Ohio book. This rather academic work was published in 1992, so after two decades it's a bit dated, but the map does show a blank for Lake County, where we saw the butterfly. A county record, apparently.

One of the most gorgeous damselflies to be found along our streams is the American rubyspot, Hetaerina americana, and we saw plenty. The male is on the left, and has a firm grip on his female. They have either just mated, or are soon going to. Rubyspots are strongly associated with streamside beds of Emory's sedge, and especially water-willow, Justicia americana.

A pair of stream bluets, Enallagma exsulans, caught in the act of mating. The male (blue) has the brownish female held by her neck in his forceps-like claspers, and she has brought her abdomen tip around to join with his genitalia. Such a mating position is termed a "mating wheel", and when so joined the damselflies form the shape of a heart.

We stumbled into this interesting clubtail dragonfly; a massive bruiser in comparison to the previous two damselflies. It is a black-shouldered spinyleg, Dromogomphus spinosus.

This was a very cool find and I was pleased to be able to make a decent image of the animal. It is the eupatorium borer moth, Carmenta bassiformis, and it is most unmothlike in appearance. This species is a day flyer, and an apparent wasp or hornet mimic.

We saw several of these colorful and ornately marked Henry's marsh moth caterpillars, Simyra henrici, all in beds of Emory's sedge. The sedge beds were often interspersed with prairie cord grass, Spartina pectinata, and it may be this grass that these caterpillars are feeding on.

Looking rather lobsterlike is this robust crayfish, Cambarus robustus. The Grand River is full of crayfish of several species.

Hunting from some streamside vegetation was this huge fishing spider, which I think is Dolomedes tenebrosus. Fishing spiders on the hunt will float their forelegs and palps on the water's surface, and use them to sense aquatic prey. Should a bug or even a small fish cause perturbations to the water nearby, the spider will be on it in a flash.

Marcia Rubin spotted this colorful red eft, Notophthalmus viridescens, scaling a moist shaley bank. Efts are the immature stage of the red-spotted newt, and can remain in this orange land-dwelling form for several years. Eventually it'll transform into an adult and commence life as a strictly aquatic salamander.

Of course, we stopped to admire and make photos of the bizarre freshwater sponges, Spongilla lacustris, which I wrote about HERE. This was a "life sponge" for me, and about everyone else who has seen them here.

We were stopped dead in our tracks by the spectacle of several six foot tall turk's-cap lilies, Lilium superbum, in full flower. Turk's-caps rank high on the list of showiest wildflowers, and they are not common in Ohio. Plenty of the orange beauties can be found along the Grand River, though.

We made a special side trip for this plant, the few-flowered St. John's-wort, Hypericum ellipticum. It is threatened in Ohio, and I had only seen it once before, at this very spot some 15 years prior. It was nice to see this rarity still prospering at this site.

Huge, luxuriant beds of lizard's-tail, Saururus cernuus, line the Grand's banks in places, and this aquatic plant was in full flower. It seems that everywhere one turns along this river there is something noteworthy to see,

I am most appreciate of all the organizations that work hard to conserve the Grand River and its spectacular habitats, and I hope you get the opportunity to explore this river someday, if you haven't already.

Very cool finds. I've never seen anything like that moth.