If I've said this once, I've said it 100 times: If you are a reincarnationist and believe you have any control over your destiny, DO NOT come back as a bug! Nearly everyone and everything will be out to get you, and the end can come in gruesome ways that even Hollywood horror flick producers haven't dreamed up. Graphic evidence as to the folly of life as an insect follows; an especially apropos example as we near the Halloween season 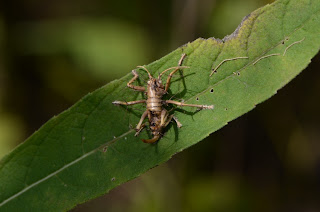 On a recent excursion to Adams County, I spotted this cricket high on a leaf. Its identification flummoxed me. It looked like a camel cricket, but an utterly bizarre specimen, and one normally wouldn't find crevice-loving troglodytean camel crickets climbing high on leaves in the forest understory. A closer inspection revealed that I was looking at the dead husk of the cricket - it had fallen victim to some seemingly terrible fate. 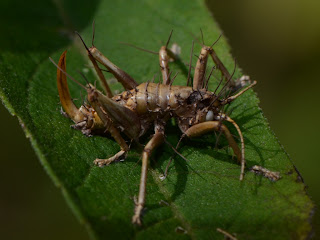 So I sent a photo off to orthopteran expert Wil Hershberger and soon had my answer. Zombie Fungus! I was correct in that it was a camel cricket, and a female as evidenced by that long scimitar-shaped ovipositor jutting from her rear. But I couldn't square all of the bristles or spines with anything that I was familiar with.

In a nutshell, here's the story and its a horrorshow. Apparently there are numerous species of fungi, many or most in the genus Cordyceps or closely allied genera, that attack various insects. Ants, wasps, and crickets seem to be common victims. When spores of the fungus land on an unlucky but suitable host, they then germinate and the fungus invades the interior of the animal via its spiracles, or air holes that allow respiration. Once inside the victim, the fungus grows rapidly by sending out tentacles known as mycelia, which radiate throughout the victim's innards. These fungal tentacles begin consuming the insect from the inside, but the fungus cleverly avoids ingesting the most vital organs. By prioritizing its consumption of the insect's inner workings, the fungus keeps the victim alive and mobile.

When the alien invader has ingested enough mourishment from its host and grown to unstoppable dimensions, its snakes more of its mycelia into the creature's brain. Then things get really whacky. Somehow, the zombie fungus is able to produce specialized chemicals that alter the insect's perception of pheremones - the chemical codes that many insects produce that guide them to prospective mates or otherwise dictate behavior. The zombie fungus somehow remaps the (in this case) cricket's sensory perception to such a degree that the animal behaves differently than it normally would. Hence, my discovery of this camel cricket in a site where it would not normally be.

Once the zombie fungus has manipulated its host into a site that allows for maximum spore dispersal, it commences its grisly last hurrah. Now that the victim is properly positioned and its brain functions and motor skills are no longer required, the fungus launches an all-out feeding frenzy, consuming the brain and other vital internal cogs. In a horrific grand finale, the zombie fungus shoots forth long slender stalks from the victim's body - the "bristles" that we see in my photos. Fungal spores are released from the summits of these stalks, and drift off to start the cycle over.

I am personally rather grateful that these zombie fungi have not yet made the jump to human hosts, at least insofar as I am aware. They might someday, though. You'll know they have when you spot a person who has scaled to the summit of a flag pole, and long tentacle-like bristles are waving from his hollowed out body.
at October 05, 2011

I read about this phenomenon somewhere online not too long ago. How truly gruesome! Makes you wonder how a fungus evolved to take over an insects body in the way that it does. Creeeeee-py! -HotH

Awesome post! Slow manipulative and torturous death by fungus. I can't imagine a worse way to return to the dust of the earth...or spores on the wind.

Wow, this is an amazing find for you. Thanks for the informative post.

That's exactly what happened to me in high school...

Thank you all for your interest and this marvelous, bizarre, and utterly horrifying fungus, of which I ws so fortunate to stumble across.

Jason, we have often wondered if you had been fungusized :-)

Hey Jim, nice to be with you when you discovered something new even if it is gross. I would rather remember the Imperial Moth caterpillar! What a beauty.

Holy crap! This could also explain some guy I saw washing dishes the other day. But seriously, holy crap!