UPDATE: I originally had this bug identified as the red-shouldered leaf beetle, Saxinis saucia. How wrong I was! Janet Creamer, who really knows insects, pointed out that it is actually the similar Eastern Babia, Babia quadriguttata. I stand corrected and thank you, Janet! Check out her blog, HERE. Now. someone tell me just what the heck "Babia" means!
﻿On a recent expedition into the LaRue Pine Hills of southern Illinois' Shawnee National Forest, my attention was momentarily diverted by an interesting little beetle. As I was preparing to lock it into the sights of my macro lens, I saw others of his ilk. And these others were engaging in far more interesting behavior than was the solo guy. 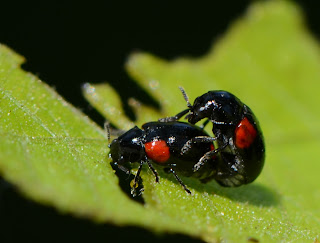 Eastern babia beetles, Babia quadriguttata, busily engaged in the process of making more of their kind.

These are good-looking bugs, albeit tiny ones. I'd say five or ten of them could fit on a quarter. Like so many insects, Eastern babias are easily passed by, due to their diminutive stature, but if noticed and inspected turn out to be veritable objets d' art. Glossy black and shiny as fresh paint, the beetles are emblazoned with a brilliant scarlet shoulder epaulet. 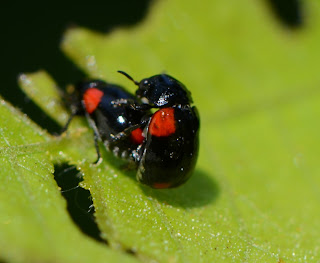 What was especially amusing is HER reaction to HIM. The guy finally jumped through whatever hoops is necessary for the males of this species to score, and look how she responds. He is busily at work, doing his best, and she continues on eating furrows from the leaf! A total diss, I'd think. This sort of disrespect cannot do much for the male babia's self esteem.

So, I have learned two things about babias. They are responsible for some of the caterpillar-like grooves eaten from leaves, and the women treat their men rather shabbily.

As far as other natural history tidbits regarding this quite showy and interesting little bug, well, there doesn't seem to be much information out there.

The wacky world of insects is always full of surprises.
at June 08, 2011

The red-winged blackbirds of the beetle world. Pretty cool.
In defense of the female's behavior...a girl's gotta eat, ya know. There'll be egg-laying and all other sorts of chores coming up.