It is 19 degrees with light misting snow right now in Columbus, Ohio. Everything is blanketed in white. Nary a shade of green to be seen in the out of doors - other than some conifers - and it's about this time of year that I always start to miss the flora.

While going through scads of photos the other day researching a project, this one caught my eye. Perhaps because it is the antithesis of the season we are now snowed into. I snapped this shot of Swamp Rose, Rosa palustris, on July 1st - another universe from this time of year, botanically speaking.

We have five species of native roses in Ohio, and they all look good. But Swamp Rose may lead the pack in sheer showiness. Just don't try crashing through the stuff. The dense shrubs are heavily armed with stiff downward-curved thorns, and you'll get cut to ribbons for your transgression. 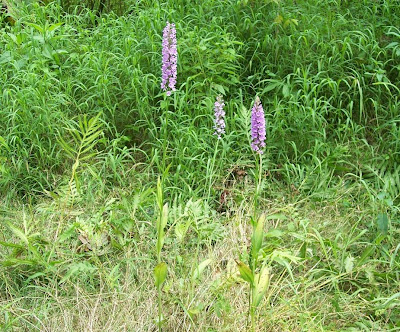 Purple Fringed Orchid, Platanthera psycodes, one of Ohio's 46 native orchids and one of the rarest. I just became aware of this find a month back, when Don Schmenk, manager of the Maumee State Forest in northwest Ohio, tipped me to it. A person who regularly explores the forest hit the jackpot when they found these. 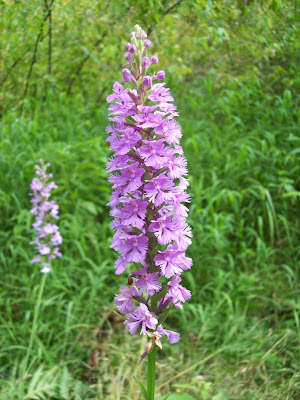 Purple Fringed Orchid is endangered here, and in a good year, there may not be 100 plants in the state, in total.
Most of Ohio's orchids are rather nondescript, insofar as orchids go. Don't get me wrong - all of them are cool, and have very interesting floral structures. But most of 'em don't look like this creature. A Purple Fringed Orchid in its full glory is enough to drive an avid gardener mad with desire, made all the worse by the difficulty of capturing one. Many thoughtless and ignorant people do dig plants like this, with aspirations of pinkening the garden with their blooms.
It won't happen, though - wild orchids are notoriously hard to grow, and don't often last long. It's best to leave them in their wild state, and unfortunately it's also necessary to take some care to safeguard locations such as this one. 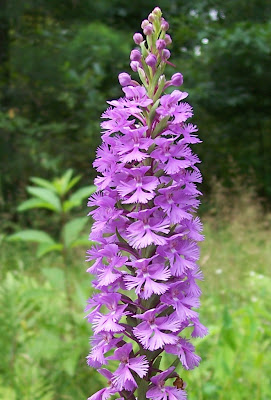 Orchids produce a bonanza of windborn dust-like seeds. These miniscule vessels lack sufficient stored food and other nutrients of their own; thus they must quickly tap into subterranean fungi for sustenance. These myccorhizal fungal relationships flourish and sustain the orchids, and are typically impossible for the average person to replicate, hence any plundered orchids don't last long.
If you like plants, consider attending this year's Ohio Botanical Symposium on March 26, right here in Columbus. The event typically attracts about 400 people, and is a fantastic opportunity to meet other botanists and learn lots about flora. All the details are RIGHT HERE.
at January 04, 2010

Your link for the Ohio Botanical Symposium looks good, but I can't get it to work. This link works for me. http://www.dnr.state.oh.us/tabid/20259/Default.aspx

Happy New Year to you too Jim.
I know what you mean about missing plants this time of year. With the greening of the landscape comes the "cymbalance" of spring - birds and bugs singing from fields and forests...ah, thanks for the refreshing memories of a wonderful summer of exploration and aural sensations.

Thanks for the tip on the link, Ben - seems to be working now.

Can't wait to hear you speak at the Wildlife Diversity Conference in March, Wil! I'll put a plug for that on here later.

I didn't realize Platanthera psycodes was that rare in Ohio. I've personally seen it growing in two places. One was just a single plant many years ago, but at the other place there were many spread out over a few miles. Along state route 37 between Junction City and Bremen is where I saw them. Even that's been a few years ago, but chances are there are still some there. They were growing in with purple phlox, which they resemble, and it made them a little harder to find.