Rural Jackson County, December 19, 2009
Winter in Ohio, at least what it ought to look like. I snapped the above photo last weekend, while searching out birds on the Beaver Christmas Bird Count. Some of the narrow gravel roads were snow-covered and impassable, but all of the white stuff made for pretty scenery. Today, Christmas Day, it's all gone, having been melted away by a strong cold rain.

Maybe because I grew up in the north, where things do get chill and snowy, I've always liked winter and all it brings. And Christmas Bird Counts! I probably formally participated in my first around the age of 10 or 11, and have done 'em ever since. I'll probably do six this winter.

Along the way, one learns some things about ferreting out birds in the bleak of winter, when most neither sing nor eagerly reveal themselves. The photo above is of a grove of Staghorn Sumac, Rhus typhina, its long persistent fruit clusters burnished with white tufts of fresh snow. One of our most secretive and under-reported winterers, the Hermit Thrush, absolutely loves sumac fruit and that's the habitat to seek them out. I found one in this very thicket, and two others elsewhere in the sumac.

Star of the show on last Sunday's Columbus Christmas Bird Count was this gorgeous female Merlin. We spotted her at Green Lawn Cemetery, which has played host to wintering Merlins for several years now. Perched atop the highest dead boughs of a massive Sycamore, she allowed for a close approach by our party. I got lucky and hit the shutter just as she splayed her tail and wings. 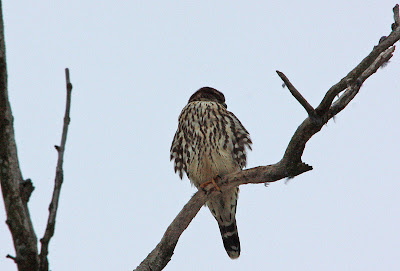 A very nice photo, courtesy of Bernie Master, who was part of our team. We also had four newer birders along; the Merlin was a life bird for all of them. One lady was a bit frustrated that the little falcon paid us absolutely no mind - I think she felt it should look at us or something.

But the massive bipeds fawning at the base of her tree represented neither threat nor food, so she didn't consider us worthy of even a sideways glance. Like the best pugilists, ala Ali and his pioneering trash talk, falcons are quite arrogant and this Merlin felt it was above us in every way.

Doesn't bother me a bit. In fact, if I were able to capture speedy shorebirds and darting juncoes on the wing, I'd be arrogant too. I was just glad that a Merlin graced us with its presence for a bit, and that four new people were along to fall under its spell.
at December 25, 2009