Our group of last Sunday, although ostensibly a bunch of botanists, noticed lots of stuff other than plants. Among many interesting animals that we encountered were some of those most magnificent of beetles, the tiger beetles. 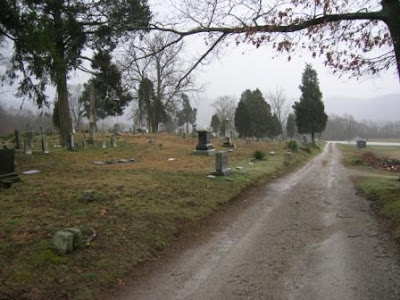 Sandy Spring Cemetery in Adams County. The hills of Kentucky loom in the distance. This old cemetery sits on the inside of a big bend in the mighty Ohio River, and is atop a gargantuan pile of sand deposited over the eons by floods. Such habitat - riverine sand terraces - are exceedingly rare as most have been obliterated by development, agriculture, or sand mining. This spot was safeguarded by the establishment of the cemetery long ago. A number of rare plants occur here, and that's what we were looking for.

Earlier in the day, we had crossed paths with a Six-spotted Tiger Beetle, Cicindela sexguttata, probably the most common of the twenty species reported from Ohio. You've probably seen one. They're an inch or so long, and a brilliant iridescent green. Like other tiger beetles, they move in impossibly quick bursts, as if propelled by small explosives.

If sufficiently harried, tiger beetles will take to the wing, and this one had the decency to alight on one of our trip participants. There, we were able to study it well, and admire the field mark that spawned the common name: the six beige spots that rim the edges of the carapace, or shell. As we shall see, it is a very good thing for our human model that these tiger beetles are not, say, the size of german shepherds.

Back in the cemetery, we were excited to come across a much scarcer tiger beetle. After a bit, they allowed close approach, as we found this amorous pair engaged in the business of making more tiger beetles. Thus, we could move in for good photos of what are normally exceedingly difficult beasts to photograph. I had my lense about six inches away.

I owe a debt of gratitude to Judy Semroc, one of Ohio's best naturalists, for determing the identity of this Festive Tiger Beetle, Cicindela scutellaris. Why is it festive? Crikey, just look at the photo, man! I don't know these critters very well, but Judy certainly does, and was kind enough to not only pin a name on this one, but share lots of other good information.
There are several reasons tiger beetles are tough to photograph. One, they have enormous alienlike eyes that apparently work very well. Sneaking up on one is pretty much impossible. Two, they are blindingly fast. In fact, some people claim that tiger beetles may be the fastest land-going critters on earth, proportionate to their size. Apparently they can hit 5 mph, which for something so small is speedy indeed. Finally, if running doesn't shake the threat, they burst into flight and quickly move themselves well out of harm's way.

Tiger beetles are voracious predators, and seem to savor ants. And the above is a really odd "ant" that I photographed last summer in this same locale. Don't know if even a tiger beetle would be up for taking on this thing, though. Our orange and black friend is an Eastern Velvet Ant, Dasymutilla occidentalis. And it's no ant - this is a large wasp, and the one in the photo is the flightless female, searching out a ground burrow of a bee or other species of wasp. If she finds one, an egg will be laid within and the young velvet ant will eat the larvae of the host. Another name for velvet ants is "cow killer". That alone should give you an idea of the pain caused by its sting.

Anyway, back the beetles, and why it is a good thing that we people aren't a lot smaller, or they aren't a lot bigger. We already discussed their eyes and speed. So, tigers have all of the equipment necessary to locate and run down prey. And if you are the prey, things will quickly go from bad to worse. Tiger beetles are equipped with massive tusklike mandibles that can quickly shear a victim into mere fragments of its former self. Which then our beetleian vivisectionist gobbles up.

This is a map of the Ohio distribution of the Festive Tiger Beetle, and according to this, Adams County is a new county record. But garnering county records of tiger beetles is probably not too hard to do. Even though they are large enough to be readily noticeable, are ornately marked and often colorful, and have behaviors more interesting than many other animals, they are easy to pass by.
Next time you are in an open sandy area, a dirt bluff, or the gravel bar of a river, watch for tiger beetles.
at April 09, 2009

My dear friend, I love nature too. Don't forget to visit my blog. you and all of your friends are invited. I really appreciate your support. Thanks...

Jim- Those are some extreme closeups, very nice.

Very nice post on this fascinating group of beetles. I just put up a post of my own on the festive tiger beetle in Missouri - stop by if you get a moment.