Some people have all the luck. Back on July 22, Sylvia and Gary, who live in southern Ohio's Pike County, found a Gulf Fritillary in their yard. You can revisit that extraordinary sighting right here. They have also had Cloudless Sulphurs, another more common immigrant from the south. Some amazing photos of these jumbo flying lemon wedges can be seen, courtesy of John Pogacnik, here.

Of course, it is never totally luck when great finds are made, whether they be birds, plants, or butterflies. The observer must be in tune with their surroundings, up on common species so that they know when something is unusual, and intellectually curious enough to try and figure out what the oddball is. And then, hopefully, quick with the camera and able to document the find.

Sylvia recently sent along photos of a find that trumps even their Gulf Fritillary, which is a major find in Ohio. Their yard, without doubt, is an amazing place for butterflies.

Backlit beauty, a Long-tailed Skipper, Urbanus proteus. Look at the tail streamers on that butterfly! This is, for the birders, kind of like having a Scissor-tailed Flycatcher show up in your back forty, although, arguably, better. There have been at least 15 records of that southern flycatcher with the elongate tail, but only perhaps three or four impeccably documented records of this skipper. I would suspect that even an absolute butterfly neophyte would stop to gaze in wonder at this one were it to appear in their yard. And one wonders how many others may have shown up in Ohio this year, but were never reported or documented. If you know of any sightings, please let me know.

Check this gorgeous photo by Sylvia! Told ya, these are jaw-droppers. I've seen many in the tropics and South Texas, and they always catch one's eye. It is even relatively easy to get a non-butterflyer to have a look.

Interestingly, Sylvia and Gary found this individual on October 11th, and Ohio's first documented record - a specimen was made - comes from Franklin County on October 9th, 1945. 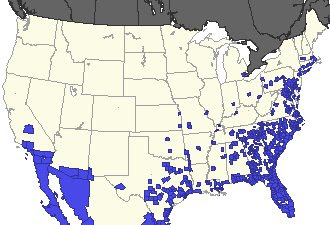 This map depicts the North American distribution of Long-tailed Skipper, courtesy the Butterflies and Moths of North America website. Its strongholds in the U.S. are south Florida and Texas, but as one can see from the map, there are numerous vagrant records well to the north. Ohio is getting near its limits for northward vagrancy, though.

This species, which ranges as far south as Argentina, has been known to temporarily colonize as far north as southern Illinois. The host plants are pretty common and include tick-trefoils (Desmodium species) and Hog-peanut (Amphicarpeaea bracteata), and there are plenty of these plants here.

It isn't rocket science to predict that we'll be seeing more records of this powerfully flying distinctive skipper here in the Buckeye State, if mean temperatures continue to warm. Butterflies and dragonflies are global warming hyper-responders, and it is important to document southern species to the north, like the Long-tailed Skipper.

Thanks to Sylvia for sharing her great find and photos!