It Won't Kill You - Promise!

A coworker brought recently brought in a real horrorshow of an insect, a bug that is sure to turn the stomach of an entomophobe. This is the sort of flying terror that has sane people running around in a crouch, screaming and waving their hands wildly about in blind efforts to ward the beast off.

Every once and again, one of these wasps with the prodigious "stinger" enters a garage or house, and to many inhabitants, it's presence is worse than if a Grizzly Bear knocked its way in. All becomes chaos, until some superhero plucks up the courage to swat it into oblivion.

But, as is so often the case, all is not as it seems.

Let's take a look at this thing.

An Ichneumon wasp, Megarhyssa macrura. Swatted into oblivion, but at least the body was preserved so that we can learn about it. You can readily see why someone with no knowledge of these things would get riled up at the sight of that "stinger". In this case, it tapes out to nearly 3 1/2 inches long! Except, it isn't a stinger. True, this is a wasp, and many wasps do pack gnarly stinging punches, but I'm not sure that this one can even sting at all. Of course, if you felt the tickling sensation of a bug crawling on you, and looked down to see this beast 6 inches away crawling up your arm, an extreme reaction might be excusable. But that long wirelike extension is actually an ovipositor, an incredible piece of the female Ichneumon's anatomy that allows her to do amazing things with her eggs, as we shall see. 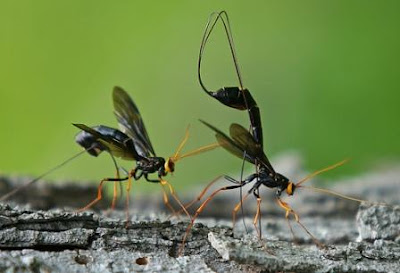 Thanks to Tom Smith for sharing this stunning photo via Flickr. He took it in New York, but we have this species of Ichneumon here in Ohio also. This one is the aptly named Giant Ichneumon, Megarhyssa atrata, and females have ovipositors that put even the species above to shame. Some individuals can allegedly have ovipositors up to six inches in length! I've seen them a few times in the wild, and can believe that.

Tom's beautiful photo shows this interesting wasp at work. Ichneumons are parasitic; they lay their eggs in the larvae of woodboring horntail wasps. No one fully understands how they work this out, but somehow the Ichneumon detects the presence of the horntail larva deep within the wood of a tree or log. Once a suitable victim is devined in the woody depths, the wasp starts augering in with that incredible stiff wiry ovipositor, just like a derrick drilling for oil.

Three, four, five inches down it goes, until contact with the soft grub is made. The Ichneumon then injects an egg into the soon to be suffering horntail larva, and when it hatches Junior Ichneumon will begin consuming its host. Amazing, albeit somewhat horrifying.

Ichneumon females often oviposit in pairs, as shown in Tom's photos. Again, it doesn't seem that anyone knows exactly why, but it could be that horntail larvae often occur in small concentrations, thus, so do the parasitizers. It is not that uncommon to see the stiff ovipositors sticking out of wood, but no wasp. Victimizer becomes the victim. The process of spearing an egg deep into buried horntail wasps can be a lengthy one, and the Ichneumons become quite vulnerable during their raids. All it takes is for a sharp-eyed wasp-loving Summer Tanager to spot the wasp, and it's easy pickings and another step added in the food chain.

I didn't realize there were so many different kinds of Ichneumons until I read 'The Snoring Bird' by Bernd Heinrich. He writes about his fathers obcession with ichneumons.

I have never seen the one you have here on your blog. I will watch for it now. What a sight it must be with that long ovipositor.