Shorebirds: They Never Cease to Amaze! 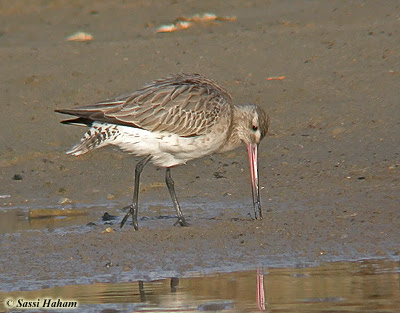 E7 - a champion of the avian worldIt's official - the godwit makes the longest non-stop migratory flight in the world.
A bird has been tracked from its Southern Hemisphere summertime home in New Zealand to its breeding ground in Alaska - and back again.
The bar-tailed godwit, a female known as E7, landed this past weekend after taking just over eight days to fly 11,500km from Alaska to New Zealand.
Unlike seabirds, which feed and rest on long journeys, godwits just keep going.
The migrant champion was one of 13 satellite-tagged bar-tails (Limosa lapponica baueri) that left New Zealand at the beginning of the year.
Tag bonus
E7 set her first record on the way north, when she flew non-stop for 10,200km (6,340 miles) to Yalu Jiang in China. She then flew a further 5,000km (3,000 miles) to the godwit breeding grounds in Alaska. And on the way back to New Zealand, her tag still working, E7 set another record (7,150 miles).
"We were pretty impressed when she did 10,200km on the way north," says Massey University ecologist Phil Battley. "And the fact that she can now do 11,500km... it's just so far up from what we used to believe 10 years ago when we were thinking a five or 6,000km flight was extremely long. Here we've doubled it," adds the New Zealand coordinator of what is an international study.
For researchers, tracking the second leg of E7's journey was a bonus - her implanted satellite tag kept working well past its expected cut-off date.
"If you're trying to confirm how far birds fly and whether they are making stop-offs, it's only now with the technology being small enough, you can do this remotely. Otherwise we'd still be using educated guess work," Dr Battley says.
And that means the researchers now know that the godwits really are the champions of avian migration. Unlike seabirds, which feed and rest on their long journeys or swifts which feed in flight, the godwits make their long journeys without feeding or drinking.
Plump up
Next year, Dr Battley hopes to implant satellite tags into larger male godwits (this year the males had external satellite tags attached) to check that the male birds follow the same path as the females.

Scientists now have real data on these long distance fliersMeantime any chicks E7 would have produced during her two months in Alaska will be getting ready to leave the Yukon Delta in a few weeks as the first young godwits usually arrive in New Zealand early next month.
"Some might fly down in flocks with adults but other ones will fly down without any adults involved at all which is pretty amazing," says Dr Battley. "They're only two months old and here they are about to fly from Alaska to New Zealand."
And their mum? "She'll be eating lots at the moment and probably resting up; and she'll go back to her main routines. Then, come about February next year or January, she'll start moulting into her breeding plumage and getting fat again.
"Then it will all start again."
The New Zealand godwit tracking effort is part of the broader Pacific Shorebird Migration Program, a joint initiative between the US Geological Survey and PRBO Conservation Science.
at September 12, 2007